The British Library does not only contain books — it holds items from ancient Chinese oracle bones to Jane Austen's spectacles. Recently, I've been working with some of the British Library's collection of seals (the wax kind, not the animal kind), and have been particularly intrigued by the seal of St Edith (b. 961x964, d. 984x987), daughter of King Edgar, used by Wilton Abbey throughout the Middle Ages. The text and images on Edith's seal, which was seemingly designed during her lifetime, give a rare contemporary insight into the priorities, identities and possibly even the jewellery of a young princess in late 10th-century England.

Edith was a member of the royal family and was declared a saint relatively soon after her death, but there are few contemporary references to her. She is not mentioned by name in the Anglo-Saxon Chronicle, and the most detailed accounts of her life were written almost a century after her lifetime. 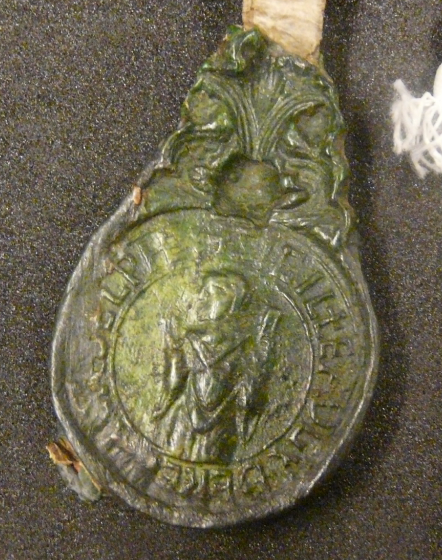 Edith was the daughter of King Edgar (r. 958/9-975) and a woman called Wulfthryth. Wulfthryth and Edith both ended up in the nunnery of Wilton; Edgar subsequently married Ælfthryth, the mother of the future Æthelred the Unready. According to her later hagiographer, Goscelin (d. c. 1107), King Edgar arranged for Edith to be educated by two foreign chaplains, Radbod of Rheims and Benno of Trier. 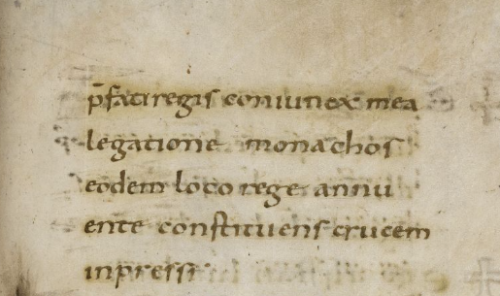 While there are few contemporary references to Edith, one of her possessions may literally have left its mark. A charter for Wilton Abbey dated 1372 bears a seal in Edith’s name. The seal impression features 10th-century artistic styles and it may be an imprint of Edith’s own seal matrix. Here, ‘seals’ refer to wax impressions made with engraved metal or ivory objects, called seal matrice. They conveyed authority, assuring the recipient that they could trust a particular document or messenger. By the late 10th and early 11th century, many elite Anglo-Saxons may have had their own seals, including kings, nobles and churches. However, very few Anglo-Saxon seals survive; only 7 existing seal matrices can be dated before 1066. This impression of Edith's seal gives a rare glimpse into the sorts of seals that may have existed in the 10th century and how this particular woman may have wished to be characterised. 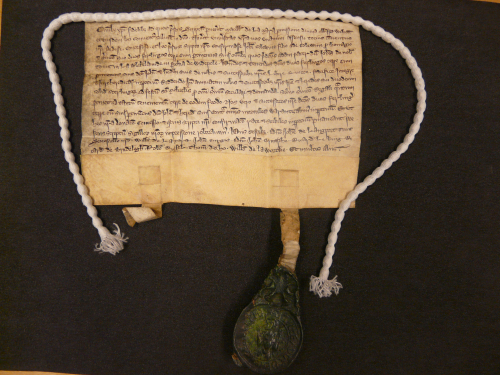 The seal's inscription emphasises Edith's royal status: ‘Sigil Eadgyðe Re[ga]l[is] [Ad]elphe’ (‘The seal of Edith, the royal sister’). Edith’s half-brothers, Edward the Martyr and Æthelred the Unready, reigned from  975 to 978 and 978 to 1016 respectively. The term ‘royal sister’ may also be an oblique reference to Edith’s status as a nun, devoted to Christ the Heavenly king.

The use of the Greek term adelphi or adelpha instead of soror, the more common Latin term for 'sister', also tells us something about the way Edith may have wished to be portrayed. Edith lived in a time when learning and book production were being promoted by wealthy monastic reformers. Obscure, Greek-influenced vocabulary was particularly popular in reformed monasteries. Female houses are now beginning to be acknowledged in the history of the revival of learning with monastic reform, and Edith’s seal shows that she or whoever made it aspired to the standards of the learned elite and their expansive vocabularies.

The seal also depicts a woman, presumably Edith, as its central image. This veiled woman is probably an idealized figure, rather than a specific portrait. Catherine Karkov has noted that her pose, attire and accessories strongly resemble the miniatures of women in the Benedictional made for the monastic reformer St Æthelwold, bishop of Winchester (d. 984), which was probably made around the same time as the seal. 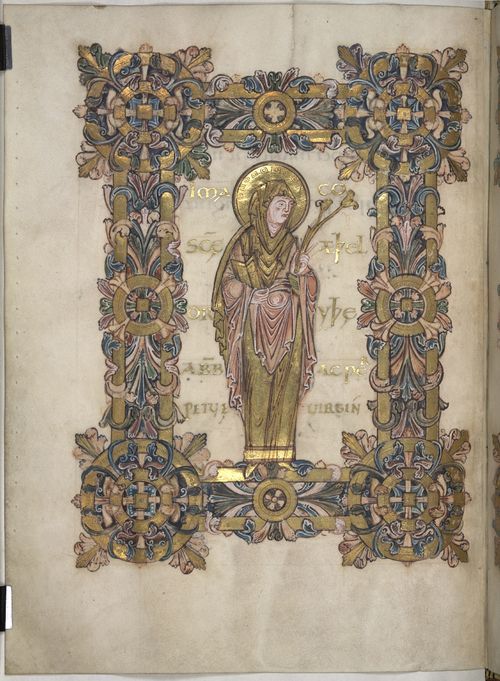 It's a pity if the seal does not give a clear idea of Edith's appearance, because her fashion sense was legendary for centuries after her death. One of the most memorable anecdotes in Goscelin of Saint-Bertin’s Life of St Edith, written around the 1080s, describes Edith fighting with St Æthelwold over her elaborate attire:

‘Blessed bishop Æthelwold once warned [Edith], with her rather ornate habit… ‘O daughter, not in these garments does one approach the marriage chamber of Christ, nor is the heavenly bridegroom pleased with exterior elegance.’ [Edith replied…] ‘Believe, reverend father, a mind by no means poorer in aspiring to God will live beneath this covering than beneath a goatskin. I possess my Lord, who pays attention to the mind, not to the clothing...’ (Goscelin, Vita S Edithae, chapters 12 and 13, trans. by Stephanie Hollis, Writing the Wilton Women (Turnhout: Brepols, 2004), pp. 42–43)

At this stage, according to Goscelin, Æthelwold conceded defeat. A fire at the monastery vindicated Edith’s dress sense: most of the nuns’ possessions were destroyed but Edith’s fine leather and purple attire was miraculously spared:

‘When they unfolded the garments, made of skin or of purple, and of the everlasting guardian, all the things were found to be as they had been before the fire, unharmed by all the burning… although, from the nature of their material, they ought to have been more inflammable.’ 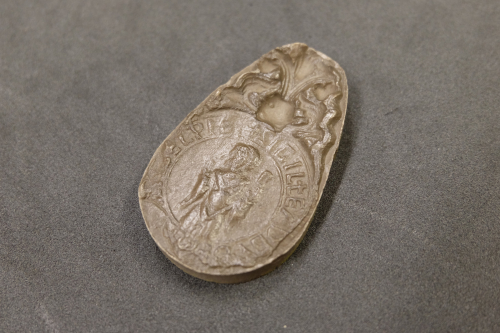 Copy of the seal of Edith from Harley Charter 45 A 36, Doubleday Cast C. 3

Goscelin may have made this story up: it provided a convenient opportunity for him to compare the unburnt clothes to Edith’s intact virginity. However, he may have learned this story from the community at Wilton, to whom he was the chaplain. If so, the community may have wanted to remember a young princess who dressed exactly as she liked, regardless of a bishop’s disapproval. And the seal matrix itself may itself have been part Edith’s flashy attire: the later impressions show that Edith’s seal matrix had a large handle made to look like acanthus leaves, which could have been attached to a belt or a necklace.

Detail of the imprint of a handle from Edith’s seal, Harley Charter 45 A 36

The nuns of Wilton remembered Edith for centuries after her death. Her seal was used throughout the abbey’s history, right up until the Dissolution of the Monasteries. The final document showing the last abbess of Wilton using Edith’s seal dates from 1536, about 550 years after Edith died.