The Medieval Manuscripts section at the British Library is a partner in a new project, ‘Insular Manuscripts AD 650-850: Networks of Knowledge’, funded by the Leverhulme Trust. The first of three international workshops at the heart of this project was held at the British Library on 24th and 25th April 2017. These workshops will support the future study of Insular manuscripts preserved in libraries around the world, which are becoming increasingly accessible via digital facsimiles. 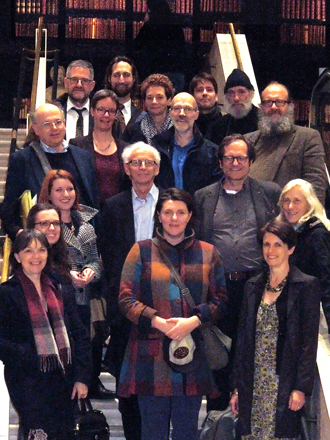 Workshop participants at the British Library

The London workshop focused on ‘Methods of making: palaeographical problems, codicological challenges’. Through a mixture of presentations and group discussion, the workshop considered what is known about the origin, production and circulation of Insular manuscripts from AD 650 to 850. 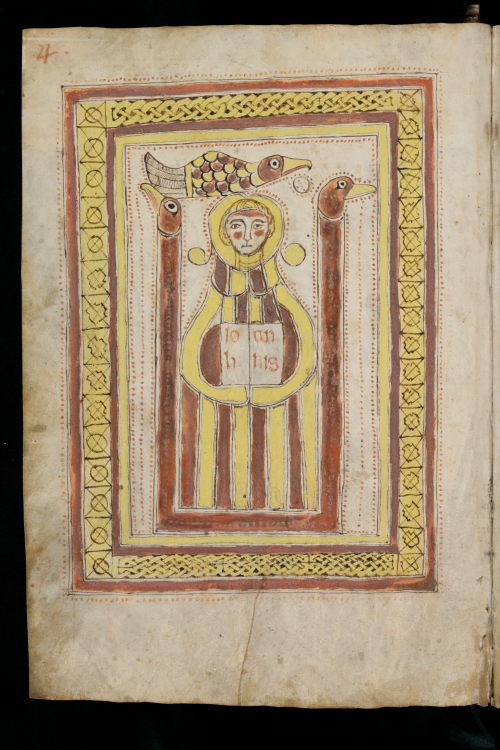 Beginning with the basics, the workshop opened with an examination of what it means to describe a manuscript as Insular. The term ‘Insular’ is used to describe a range of scripts which originated in Ireland in the 6th century. The higher grade manuscripts are characterised by elaborate initial letters decorated with interlace and zoomorphic designs, and smaller initials embellished with red dots. St Gallen, Stiftsbibliothek, Cod. Sang. 126, p.296: Hieronymus, Commentarii in Matthaeum. In this book an Insular scribe wrote alongside another trained in the local Alemannic script.

The use of Insular script soon spread to Anglo-Saxon England, particularly Northumbria, and was taken to continental Europe by Irish and Anglo-Saxon missionaries where manuscripts written in Insular scripts continued to be produced well into the ninth century. Around 500 Insular manuscripts survive and 75% of these are now in continental European libraries, including about 40% in Germany and 10% in France. Some of these are very well known and are among the greatest treasures to survive from medieval Europe, but many more are much less studied and have much to reveal about the deep cultural connections between England, Ireland and continental Europe in the early Middle Ages. 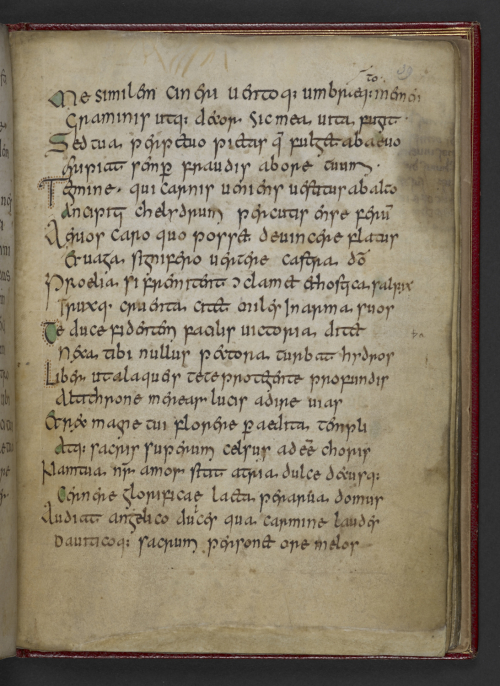 Script is not the only feature of a manuscript which can be described as Insular. The workshop also explored distinctive Insular methods of making and preparing parchment. In the early medieval period, parchment was made from the skin of calves, sheep and goats. Monasteries often used certain skins for different purposes, and established their own methods of preparing and arranging the parchment in book production. By studying these book production techniques, it is possible to reveal important details such as where a manuscript was produced and what resources a monastery could draw upon. 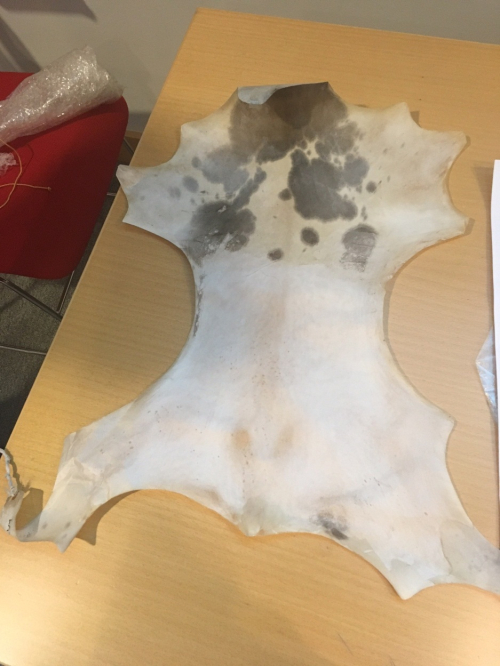 An example of a stillborn lamb's hide mid-way through the preparation process. The bottom half is further advanced in the process to demonstrate that the colour of individual animals did not affect the parchment they produced. Courtesy of Jiri Vnoucek.

The influence of Insular parchment production and arrangement can even be seen in manuscripts which were written in a Roman style using Italian-influenced uncial script, as in the Ceolfrith Leaves, fragments of one of three great Bibles written at Wearmouth-Jarrow in the early 8th century. The Ceolfrith Leaves used calf skin in traditional insular style, but announcing an important discovery, Jiří Vnouček revealed that the sister manuscript known as the Codex Amiatinus (now Florence, Biblioteca Medicea Laurenziana MS Amiat. 1) was made entirely from goat and sheep skin, mimicking the very best Italian book production in materials as well as script. The decision to produce Codex Amiatinus on Italian-style parchment fits into the overall ‘Romanizing’ character of the codex which was created as a gift for the pope. 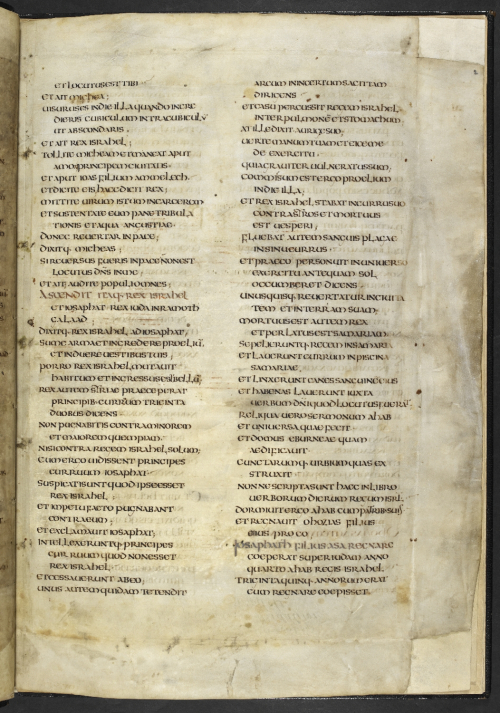 Our modern understanding of Insular manuscripts and the monasteries which produced them is often defined by luxury manuscripts such as the Ceolfrith Leaves or the Lindisfarne Gospels, but these monasteries would also have produced many more ‘everyday’, utilitarian texts, which rarely survive. 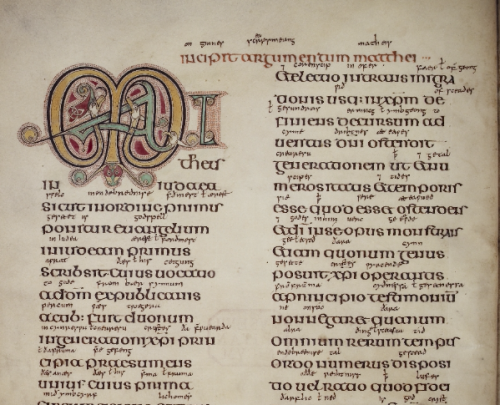 One example of an ‘everyday’ text which does survive, written in Insular script, is a letter sent from the Bishop of London to the Archbishop of Canterbury in AD 704 or 705. This letter is the earliest original letter written on parchment to survive from the Christian West. Original letters rarely survive because they had no legal value, and so there was less reason to preserve the original. There are clear differences between the cursive Insular minuscule script used to write this letter, and the elaborate Insular majuscule (also known as Insular half-uncial) used to write the Lindisfarne Gospels.

Manuscripts are inherently portable objects and were often taken away from their centre of production. Many manuscripts written in Ireland and Anglo-Saxon England, using Insular script, were exchanged between the two countries and sent to and from institutions on the Continent.

One particular manuscript discussed in the workshop was the British Library’s Irish Pocket Gospel book. This tiny manuscript (130 mm x 105 mm) was produced in Ireland in the late 8th or early 9th century, and had made its way to Anglo-Saxon England by the 10th century. In England, the decoration surrounding some illuminated initials was scraped away and repainted. It is possible to see traces of the original design. 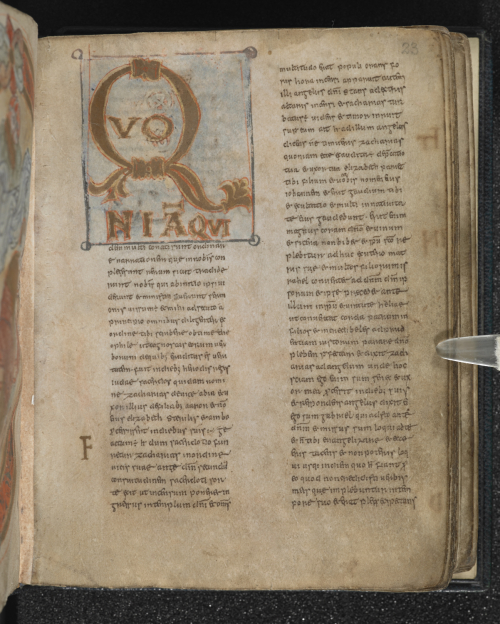 An on-going point of discussion throughout the workshop was the wide geographical reach of Insular manuscripts and the pervasive legacy of their style. The people and places that produced and used these books, and the opportunities for study created by advances in digital technology will be at the forefront of the discussions of the next two workshops to be held in 2018 and 2019. 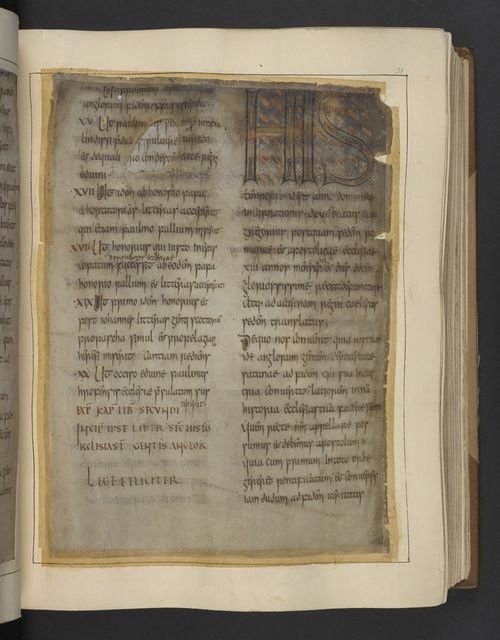 The participation of the Medieval Manuscripts section in the project complements the early medieval focus of recent digitisation projects. Over 175 Anglo-Saxon manuscripts have currently been digitised, and 400 more manuscripts produced before c. 1200 will be digitised thanks to The Polonsky Foundation England and France Project: Manuscripts from the British Library and the Bibliothèque nationale de France, 700–1200.