Written in the stars

Have you ever read a pop-up book or a book with moving parts? Today, such books are usually associated with children, but a rather fiendishly complicated example has just been digitised by the British Library. This is a set of volvelles (moving paper or parchment wheels) and a parchment astrolabe made by Thomas Hood, the first officially appointed lecturer in mathematics in England. 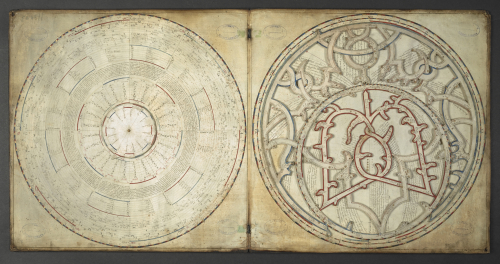 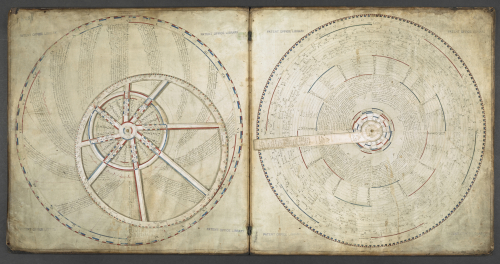 Astrolabes are used to measure the position of celestial bodies in the night sky. The best known examples are often made out of metal, but these parchment ones also work. Their latitude suggests that it was designed to be used just south of London. The ‘tulip’-shaped cutouts of the most elaborate astrolabe note the position of no fewer than 190 fixed stars. Astrolabes can be used for navigation, but the texts associated with these  astrolabes and volvelles texts show that they were primarily concerned with astrology. The text revealed by the astrolabe pertains to the 12 ‘houses’ of the zodiac. The positions of stars was used to predict the outcomes of illness and other such events. For example, the ‘fifth house’ is associated with good fortune for Venus but bad fortune for Mars. 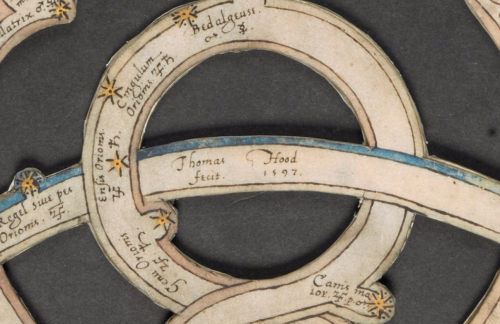 We know who made at least one of the astrolabes because he signed his name: Thomas Hood. Hood had trained at Trinity College, Cambridge, and been granted a licence to practise medicine by the university. Between 1588 and 1597, when the astrolabe was made, Hood was living in London, teaching and writing about mathematics. After the Spanish Armada of 1588, English leaders decided that their military and naval commanders needed to broaden their grasp of mathematics and navigation. Therefore, Sir Thomas Smith and Lord Lumley invited Hood to become the first ‘Mathematical Lecturer to the City of London’. 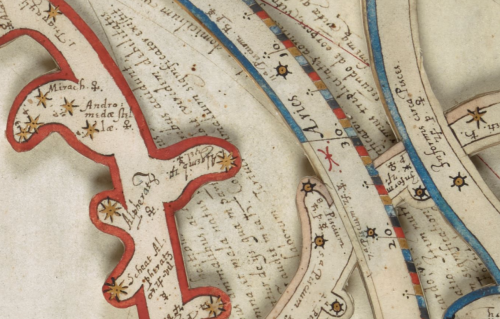 Detail of Andromeda and other constellations, Add MS 71495, f. 2r

In his lectures, Hood emphasised that it was important for all different sorts of people to know maths. As well as teaching, he also designed new navigational instruments such as Jacob’s Staff and a Sector and wrote textbooks on globes and astronomy. However, it seems that Hood really wanted to be a doctor. Although he failed his first attempt to get a licence to practice medicine in London (apparently he didn’t know enough about Galen), he was eventually given a medical licence by the Royal College of Physicians in 1597. Hood then became a doctor in Worcester, where he and his wife Frances lived for the next 20 years. 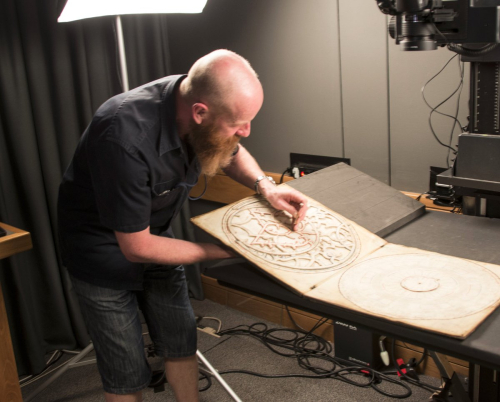 A conservator carefully works on the astrolabe before photography

Digitising the astrolabe was a laborious process, since the instruments were designed to move and to be read from all sorts of different angles. The writing behind each of the rotating devices was photographed, so that it can easily be read online, and each rotating wheel or ‘rete’ was also photographed separately. The assembled astrolabe was then photographed, as well. This required a great deal of patience, skill and cooperation from the British Library’s conservators and photographers. Let’s take a moment to thank to them for all their hard work.

Thomas Hood's volvelles and astrolabes can be viewed in full online on our Digitised Manuscripts site: Add MS 71494 and Add MS 71495.

I just discovered this blog a few weeks ago and I love it! Keep up the good work!