A Calendar Page for August 2017

It’s now August (!), which means we’re back with the fun figures of Additional MS 36684 to celebrate the start of the 8th month. If you’d like to know more about the manuscript as a whole, check out January’s post, and for more on the traditional form and function of medieval calendars, please see our calendar post from 2011. 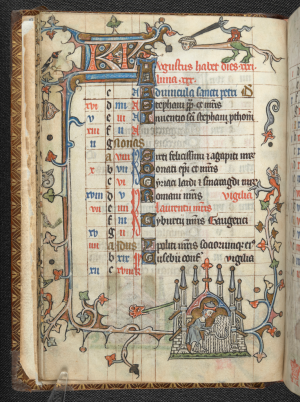 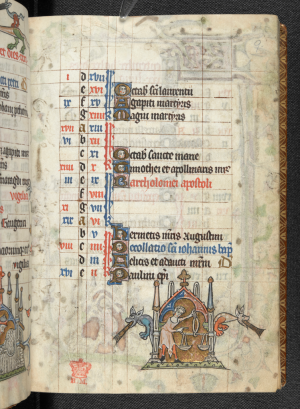 August begins with an intriguing pair of hybrid figures stationed at the top of the page: a two-legged creature with a long, birdlike bill perches on the back of a woman with an extended neck/torso atop green legs, ending in a long tail. The birdlike creature pecks the woman’s neat hairnet; she does not look amused. 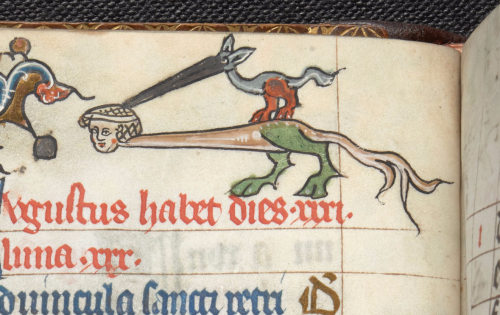 August’s labour of the month appears below the feast days for the first half of the month, and depicts the traditional summer harvesting of wheat. Dressed in a short tunic and a rather elaborate orange-trimmed cap, the peasant within the niche clutches a curved sickle, bending over as he cuts the long grain. He will most likely tie up in the wheat in bundles, known as sheaths, and use them to feed his animals in the winter. 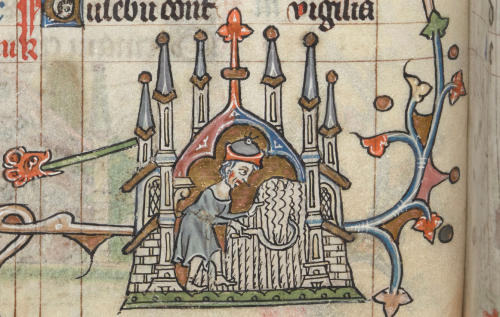 Interestingly, the traditional zodiac symbol for August, Virgo, usually represented as a single woman, is here replaced with the unmistakable sign for Libra, holding scales: 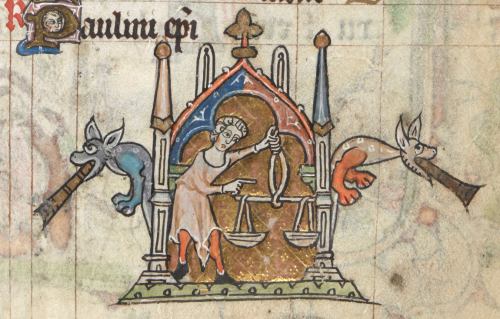 Libra is normally depicted in September calendars, as the zodiac period ranges from late September–late October, while Virgo goes from late August–late September. It is unclear why the artist of Additional MS 36684 skipped poor Virgo and went ahead to Libra – was it a simple mistake, or something done deliberately? In any case, our artist gets himself into trouble come December, when he has run out of zodiac signs, and leaves us with one of his clever hybrid creatures instead, as we will see in a few months.

Let us know what you think – did our artist make a mistake or did he skip Virgo on purpose? You can have a look for yourself at all of Additional MS 36684, fully digitised on our Digitised Manuscripts website. Until next time – sorry, Virgos!