Job opportunities with the England and France 700-1200 Project

We are pleased to announce that the British Library is recruiting for two new positions for The Polonsky Foundation England and France Project: Manuscripts from the British Library and the Bibliothèque nationale de France, 700-1200. Both positions are full time, fixed term positions, for 1 year, in the Ancient, Medieval and Early Modern Manuscripts section of the Western Heritage Department. Full details of the posts and how to apply can be found on bl.uk/careers. Page with St Mark  holding an empty scroll, from the Sherborne Cartulary which also contains account of the Passion by the four Evangelists, 2nd quarter of the 12th century, England (Sherborne), Add MS 46487, f. 43v.

The British Library is collaborating with the Bibliothèque nationale de France to enhance access to and promote 800 pre-1200 manuscripts, half of which are held by each Library. In addition to digitising and cataloguing 400 pre-1200 illuminated manuscripts held at the British Library, we will also create a new interpretative website to highlight and interpret some of the exceptional manuscripts in the project.

The first new role is for a Project Cataloguer and Researcher. This post is to catalogue and research the manuscripts in the project and enhance existing catalogue records. Other tasks will include the preparation of short summaries of the digitised manuscripts to be placed on the interpretative website. Further responsibilities may include preparing blog posts, checking and publishing images, answering enquiries, presenting medieval manuscripts to specialist and non-specialist audiences, and other activities promoting the project. Full details and how to apply for Project Cataloguer and Researcher.

The second position is for a Curatorial Web Officer. This post is to process, edit and prepare articles, manuscript descriptions and images of selected project manuscripts for the interpretative website, and to assist in the selection and description of images and the uploading of them on the website. The website will also include several films about the manuscripts in the project, and this post-holder will assist in the organisation for and scripting of those films, at least one of which will be animated. The duties of this position may also include the promotion of the website and project through blogs and presentations for researchers and general audiences. Full details and how to apply for Curatorial Web Officer.

Both positions are one year, fixed term contracts, beginning in September 2017, dependent on the necessary security clearances being obtained. The positions are only open to applicants with the right to work in the UK.

The deadline for both applications is 16 August 2017.

The interviews for the Cataloguer and Researcher will be held on 4 September 2017 and for the Curatorial Web Officer on 5 September 2017. The selection processes may include questions about the date and origin of a particular manuscript to be shown at the interview, and a short written exercise. 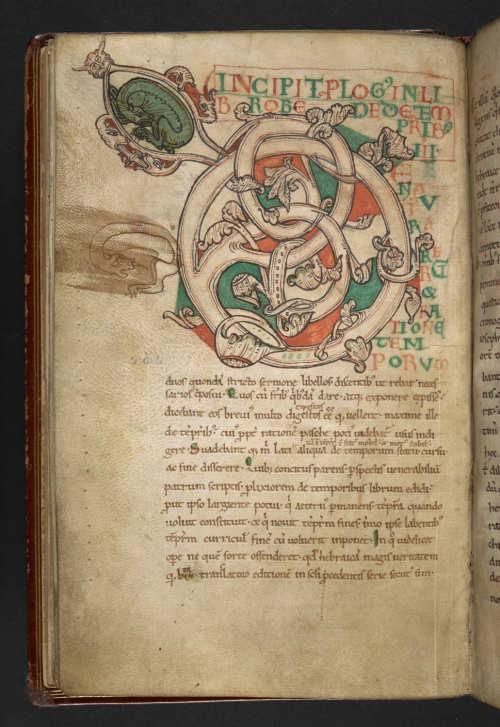 Bede, De temporum ratione, beginning of the prologue in a manuscript made either in Northern France or in England in the 11th or 12th century; Royal MS 13 A XI, f. 30v.

I already have a job, but you are welcome to use the occasional manuscript-lists and descriptions at my blog, www.thetextofthegospels . Posts include lists from the Vatican Library, the National Library of France, the British Library, and the Library of Congress, and, most recently, the K. W. Clark Collection at Duke University -- all with embedded links.