King David: life and soul of the Psalter

In a recent Twitter poll by @BLMedieval, 989 voters resoundingly agreed that, out of a choice of four medieval saints, the best to invite to a summer party would be King David (his knack for the harp being stuff of legend). In tribute to this endearing decision — which spurned St Lawrence and his griddle, St John the Baptist and his lamb, and St Catherine with her wheel (for the pyrotechnics) — we thought it would be interesting to look at images of David and his harp in the decorated initial ‘B’ of medieval Psalters. Sometimes it demands great concentration to decipher letters decorated with scenes (historiated initials) but some have such delicately crafted meanings that the rewards are well worth it. They can be visual puzzles, with a message. 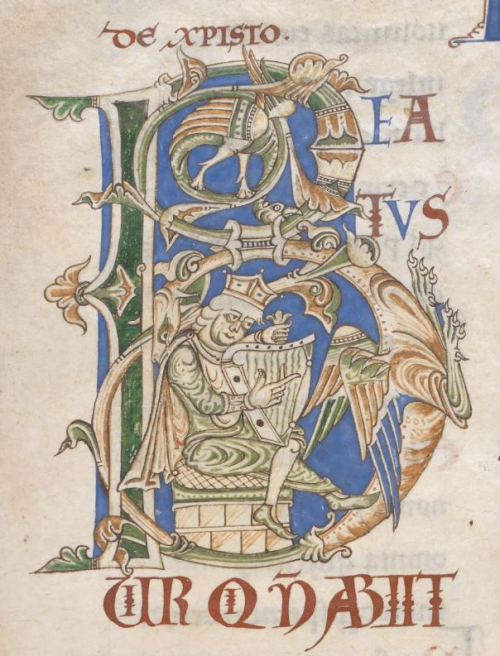 Psalm 1 in the Vulgate Bible opens Beatus Vir, ‘Blessed is the man’. The text proceeds, ‘who hath not walked in the counsel of the ungodly, nor stood in the way of sinners, nor sat in the chair of pestilence.’ The Psalms, widely believed to have been composed by King David himself, were recited by monks each day in religious services and the words were absorbed in the memory; they could have fallen out of diligent monastic mouths without a second thought. Psalters (books of the Psalms with prayers and other texts) were produced as stand-alone volumes, so the first words of Psalm 1 also mark the beginning of the heart of the book. Decorated initials at the start of major divisions helped the reader to navigate the manuscript and inspired a meditative spirit, reminding the reader to contemplate the familiar text.

In England and France, from the mid-11th century, initials were often inhabited by the author of the Psalms, namely our coveted dinner party guest, King David. A decorated initial containing an image of King David and his harp beneath a male figure representing the subject of the Psalm: Arundel MS 60, f. 13r (detail). Winchester, 4th quarter of the 11th century

In a Psalter from late 11th-century Winchester, the initial ‘B’ shows two figures suspended in and inhabiting ornate vegetal scrolls. The lower figure holds a harp on his lap and wears a crown. He looks across to the words of the Psalm. Here is David. The figure above perhaps represents the blessed man discussed by the Psalm.

Decorated initials could contain even more complex meanings. Look closely at an astonishing initial in a 12th-century English Psalter. The annotated interactive version below explains how its artists used the ‘B’ initial to frame a subtly wrought cosmic drama expressing Christ’s victory over Satan. This is all the more astonishing since this ‘B’ is no bigger than the palm of your hand. 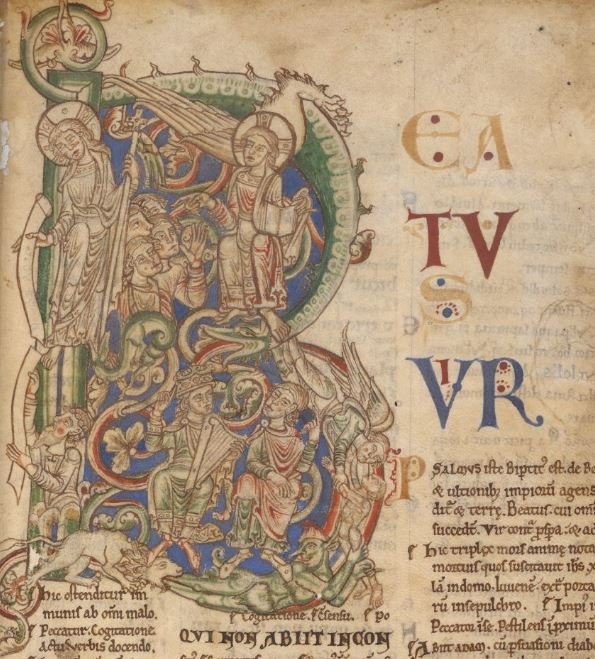 The life of Christ is held by Christians to fulfil the prophecies made in Old Testament Scripture, which includes the Psalms. Thus, inside the upper register is an image that may be Christ in Judgement before a crowd of the Blessed with the book of life, or perhaps preaching to his followers. David is beneath, at his harp, seated beside another male figure, perhaps again the blessed man of the Psalm. Both David and the man point up at Christ. The figures express Christ’s fulfilment of the words composed by David, his ancestor. At the same time (medieval artworks can often be interpreted in a variety of ways), it may be a reference to verse 1 and the blessed man whose delight is in the law of the Lord, on which he meditates day and night.

The plot thickens if we observe how, to David’s left, forming the curved bow of the lower half of the ‘B’, a human soul is being pulled up towards Christ by an angel and hell-wards, feet-first, by a devil. But the devil’s feet are in the mouth of a lion, which is, in turn, being trodden on by David. The possible meaning of this will become clear.

A male figure emerges from behind the lion, passing a scroll up the spine of the initial. It almost touches the end of another scroll, which is being held by a second depiction of Christ. Identifiable by his halo with a cross, Christ is holding a cross-staff, adorned with a flag; the attribute he is often given in images of his Resurrection. So here may be another reference to the New Testament fulfilment of the Old.

At first glance, this initial may just look whimsical interplay of human figures, beasts and plant scrolls. Never underestimate medieval art, because the web of meanings does not end here. If you look just below the crowd of souls in the upper register, you will see that the resurrected Christ’s staff is stabbing a serpent or basilisk and the image of Christ is trampling a dragon. The serpent, asp, basilisk, lion and dragon could be read as symbols of evil, which is the influence of the devil. Psalm 91 reads, 'Thou shalt walk upon the asp and the basilisk: and thou shalt trample under foot the lion and the dragon.' In the initial, all of these creatures are shown being vanquished. Thus the male figure next to David, probably the man with whom the Psalm is concerned, is a role-model; ‘blessed is the man who hath not walked in the counsel of the ungodly’. His feet, too, rest on the back of the devil in the lower border, the one wrestling a soul from the grip of an angel. In this way, the initial could be a powerful call-to-action, telling the reader to follow the example of the blessed man and, in so doing, to hope to overcome the malevolent forces described in the text.

In short, good call for keeping David on the guest-list (and not just because of his untold skills on the harp).

Posted by Ancient, Medieval, and Early Modern Manuscripts at 3:11 PM