You are turning the pages of an ancient and beautiful manuscript. It is about the size of a modern A4 volume, although wholly different in smell (parchment has the kind of ineffable musk that makes fans of history swoon), appearance (it is bound in leather with handwritten text on its parchment pages), and weight (all that wood and animal skin adds up).

In almost every direction there are pen drawings of animals. The pictures are lively, sometimes with whole scenes showing creatures performing seemingly bizarre acts: a self-castrating beaver; a colourful tiger staring at a disk. What is more, nearly all these images are outlined with little pin holes. The book is an important member of an entertaining category of medieval illuminated manuscript: the bestiary. Those pin holes are also crucial, since they indicate that at some stage someone may have copied the images in this book. 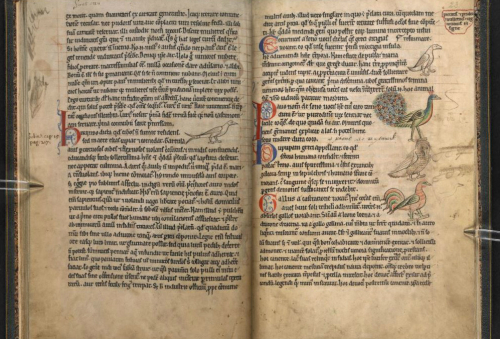 Close scribal and artistic collaboration would have been necessary to produce pages like this double-spread showing images of birds: Add MS 11283, ff. 22v–23r

Bestiary texts offer animal-lore as a source of allegorical lessons for moral spiritual guidance. The earliest bestiary manuscripts date to the beginning of the 12th century. They were made throughout North-Western Europe, but the genre flourished most in England, eventually declining in popularity in the late 13th and 14th centuries. It may not surprise you to learn that bestiary images of animals were not drawn from nature, but from established artistic conventions.

This particular book has 102 images, drawn in pen and occasionally coloured. They would have been inserted after the text was written, so the scribe left gaps for the artist to fill. 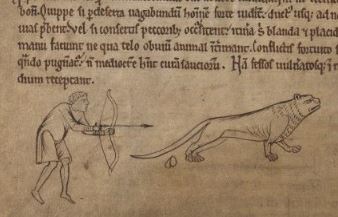 Here we can see a beaver fleeing a hunter. It has removed and dropped its testicles — valued for their medicinal properties — in order to save its own life. This alarming depiction provided an allegorical model for the moral lesson that humans should cast away their vices to give the Devil no cause to pursue them. 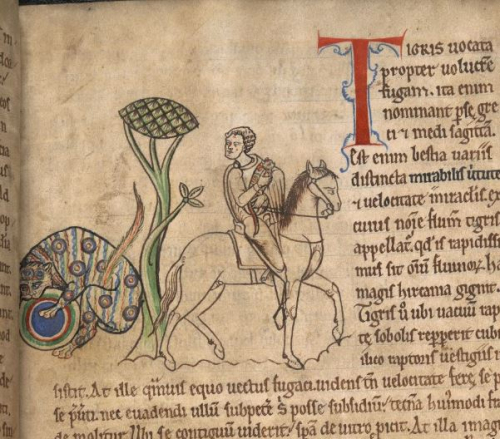 A colourful tiger nurses its own reflection, believing it has found its stolen cub, Add MS 11283, f. 2r

On another page we see the sad plight of the tiger. It is coloured with blue, green and red circles and stripes, pawing a disk decorated with the same colours. A man on horseback rides away, carrying a colourful cub in his arms. The text explains that if someone steals the cub of a tiger and they are chased by its mother, she will be distracted if a circle of glass or mirror is thrown before her, mistaking her own reflection for the lost cub in order to nurse it.

If you are fond of wordplay, you may think it apt that as well as the prowling, prancing, crawling and flapping subjects of this manuscript, it also bears the marks of having been used for ‘pouncing’. Pouncing was a post-medieval way of copying of images. Lines of holes would be made around the picture into a sheet below. This would then be removed, held over the surface intended to receive the copy and dusted with powder such as chalk or charcoal. The outline of the first image would be quickly and effectively transferred onto the new surface. 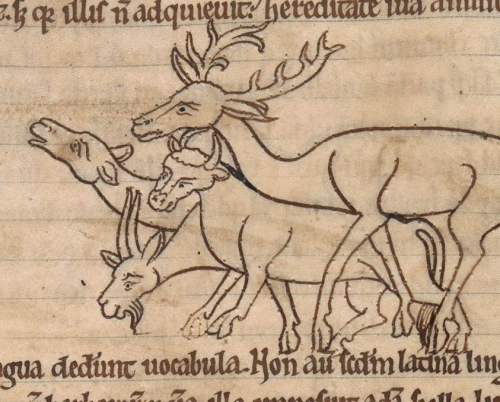 This image of a group of hoofed animals may have been outlined with pin holes in order for it to be copied via a technique known as pouncing: Add MS 11283, f.11v

Just as medieval scribes could copy texts from ‘exemplars’ (another manuscript used as a model), so later artists could copy their images. At some point, the images of this bestiary were outlined with pin holes, probably to allow them to be copied. We do not know when these holes were made in this particular manuscript, but they typically date to the post-medieval period. It is poignant to think that these holes were left by someone who admired the images as much as us.

12th century? Does the Bayeux Embroidery not count as a bestiary?