Our manuscripts contain so many hidden gems of medieval art, and one of this Blog's aims is to bring them to light. It is worth remembering, though, that many wonderful medieval paintings survive on the walls of country churches in forgotten corners of Britain. The styles and subjects are familiar, and they also have amazing stories to tell.

This image of a series of saints or apostles in roundels, holding scrolls, is from the wall of the tiny church of St Mary, Houghton-on-the-Hill, in Norfolk. which contains perhaps the most complete set of early medieval wall paintings in England; they date from the 11th century, shortly after the Norman Conquest of England. The figure on the right may be Jesus and on his left, not shown here, are demons, also holding scrolls (or are they snakes?).

Nave east wall: detail of the border with the saints (and Christ) holding scrolls, St Mary’s, Houghton-on-the-Hill (courtesy of the Friends of St Marys website)

The shape of the scrolls and the way the figures hold them up recalls this image of King Edgar, with Bishops Dunstan and Æthelwold, in a copy of the Regularis Concordia, made at Christ Church, Canterbury. in the first half of the 11th century. 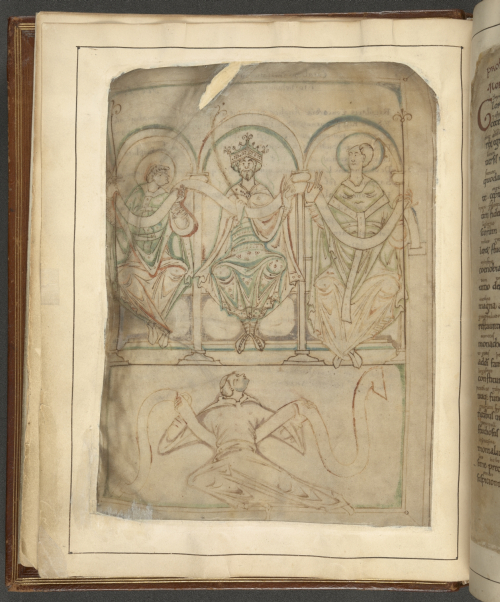 The way the wavy scroll is held up by the three figures above and its undulating shape, shaded in brown, green, mauve and ochre, repeated in the image of the monk holding the scroll below, is reminiscent of the wall painting. It has the same clear ochre outlines, though there is predominant use of yellow, and traces of white, red and green have been found on the plaster. However, the image in the Regularis concordia is clearly one long scroll held by all three people whereas the three in the St Mary’s church border are detached from each other. 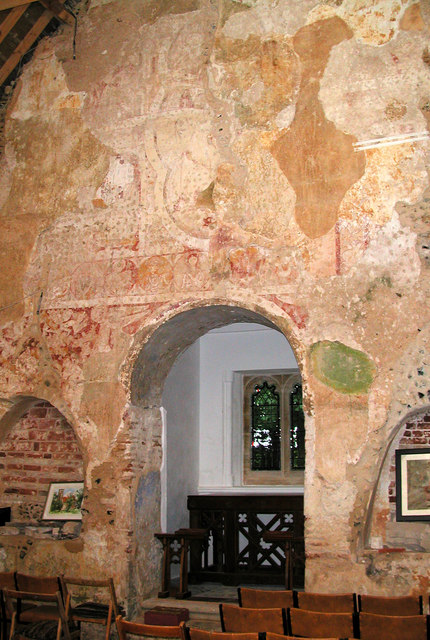 The east wall with the Last Judgement including the ‘Throne of God’ Trinity, St Mary’s Church, Houghton-on-the-Hill

The roundels are part of a scene of the Last Judgement that covered the east wall of the church, over the chancel arch. At the centre in a triple mandorla, now rather damaged, is a representation of the Trinity known as the ‘Throne of Grace’, where God the father, seated, holds the cross with Christ on it and a dove with wings outstretched represents the Holy Spirit. On God’s knee is a quatrefoil (not visible in the photographs), an Anglo-Saxon motif that indicates a very early date of before 1090 for these paintings; it is found in a number of 11th-century manuscripts.

In this image in the 'Eadui Psalter', the seated St Benedict has quatrefoil shapes on each knee, and one above and below. We have published a detailed analysis of those quatrefoils (with astonishing results) here. 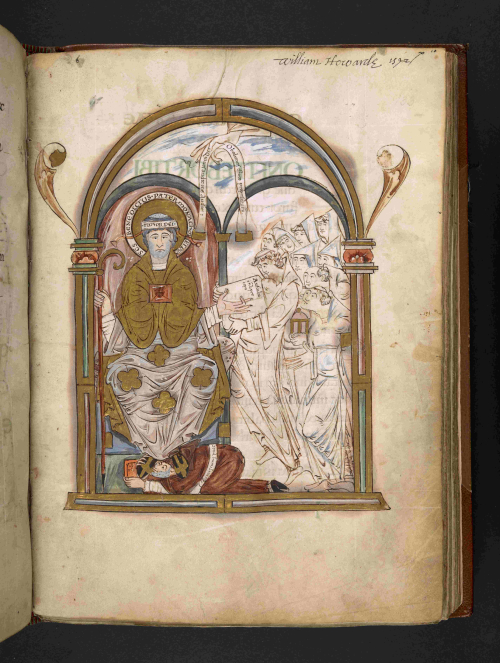 A group of monks presenting a copy of the Rule of Benedict to St Benedict who sits enthroned while another monk prostrates himself at Benedict's feet, the 'Eadui Psalter', England, S.E. (Christ Church, Canterbury), 1st half 11th century, British Library Arundel MS 155, f. 133r

If the dating is correct, this remote church may contain the earliest known example of the ‘Throne of Grace’ Trinity. Two French works of the early 12th century are the earliest manuscript witnesses (Cambrai, Bibliotheque Municipale, ms. 0234 and Perpignan, Bibliotheque Municipale, 1: see Park and Heywood, ‘Romanesque Wall Paintings’). Representing the difficult concept of the Trinity in art was first undertaken in this period; the ‘Throne of Grace’, an early attempt to depict the relationship between the three figures, became the most popular form throughout Europe from the 12th century onwards. Here is a later example from the Egerton Psalter, originating in East Anglia in the late 13th century. 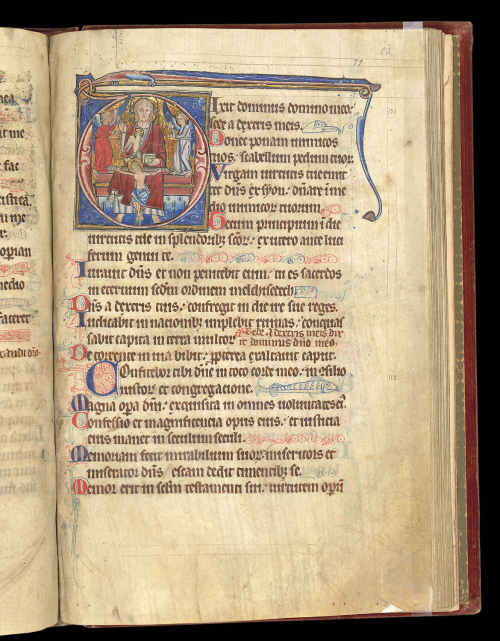 A manuscript from the early 11th century (before 1029), containing a liturgical and computistical collection known as ‘Ælfwine’s Prayerbook’, has this image of the Trinity, with the Father and Son seated together and the dove on Mary’s head, as she holds the infant Christ. 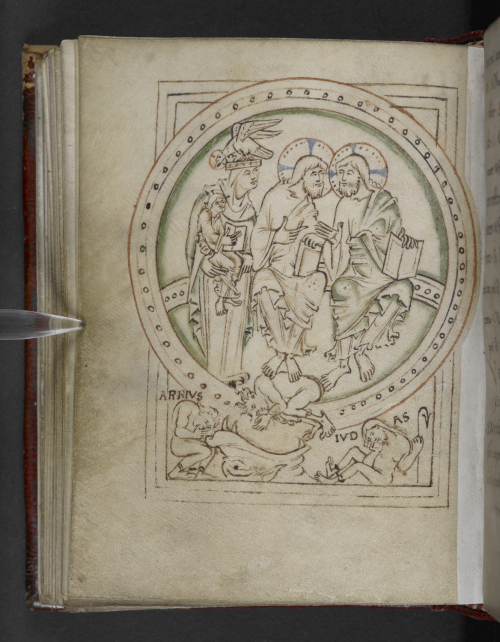 On the north wall of the church are scenes from the Old Testament, including a well-preserved image of God creating Eve from Adam’s rib, and a trace of what is believed to be Noah’s Ark. On the south wall is a fragment of a Wheel of Fortune (or perhaps a Wheel of Life), once again an early representation of this subject that was popular with later manuscript illuminators. The Friends of St Mary’s are currently raising funds to complete the uncovering of the medieval paintings on this wall. 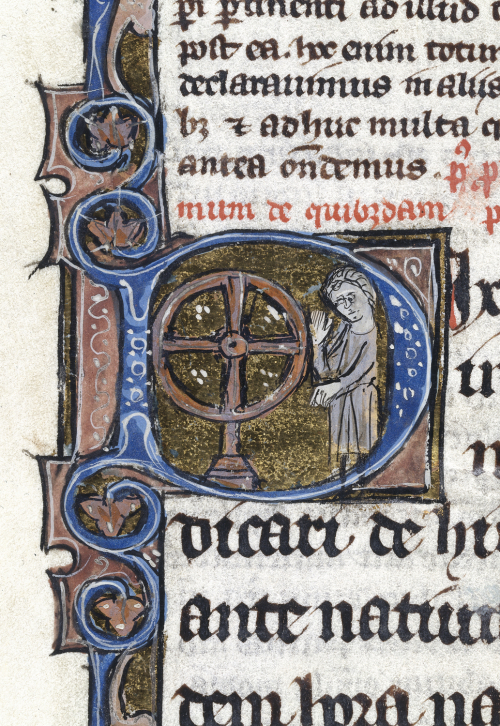 Although the subjects may be familiar, their innovative iconography and style for the Romanesque period, and the fact that they were created in a small church in a remote corner of Norfolk, makes these paintings exceptional. But even more exceptional is the story of their survival and restoration in the late 20th century. 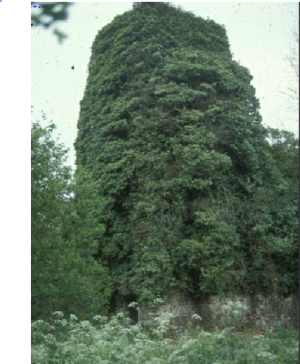 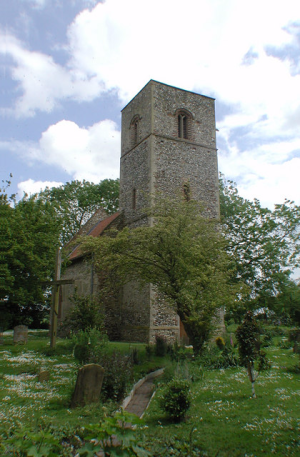 Photographs of the tower of St Mary’s church, Houghton-on-the Hill, before and after restoration

St Mary’s church is at the end of a bridleway, west of the village of North Pickenham in Norfolk, close to an old Roman road known as Peddars Way. The original village of Houghton-on-the-Hill was mentioned in Domesday Book, but earlier Saxon artefacts from the 5th to 7th centuries have been found in the fields nearby. Sir Robert Knolles, an infamous commander in the Hundred Years War, who ravaged large parts of Normandy, was Lord of the Manor from 1376 until his death in 1407. The church is believed to have been built in 1090 and was extensively altered in the 14th century, perhaps by Knolles. The congregation gradually dwindled as the village shrank in size and, following damage by a First World War Zeppelin in 1916, it was finally abandoned in 1937. 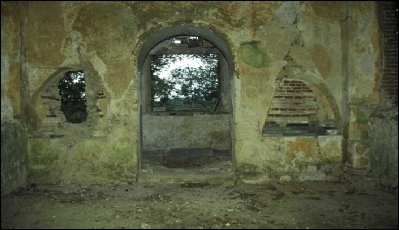 The interior of St Mary’s, Houghton-on-the-Hill, before restoration (courtesy of the Friends of St Marys website)

The crumbling, desecrated ruins, covered in ivy were discovered in 1992 by a remarkable local resident, Bob Davey, who, with his wife Gloria, worked tirelessly to restore this beautiful little church. Bob started and even paid for some of the restoration work himself, although once the wall paintings were discovered, experts were called in to continue the renovations. Bob Davey MBE, with the wall paintings in the background (courtesy of the Friends of St Marys website)

Bob Davey is usually found at the church in the afternoon, accompanied by one of the Friends of St Mary's, and he talks movingly about the building he loves so much, its history and decoration. He has his own theories on the wall paintings. For him, the figures in the roundels are holding not scrolls but snakes: the ones on the right held by Satan and his companions (not shown), drooping down at the ends, signify the Fall; whereas those on the left held by the saints have upturned ends.

With thanks to the Trustees of the Friends of St Mary’s for the information in this blogpost, for the use of their images and for their dedication to preserving this gem of medieval art, now a working church. Their website contains further information and opening hours.