Have you ever wondered how medieval manuscripts get their modern names? Did you know, for instance, that the so-called 'Bosworth Psalter' (British Library Add MS 37517) isn't named after the Battle of Bosworth Field (give yourself an extra bonus point if you knew that took place on 22 August 1485) but is instead so known because it may once have been kept in the library at Bosworth Hall in Leicestershire?

The beautiful Bosworth Psalter has recently been digitised as part of The Polonsky England and France Project: Manuscripts from the British Library and the Bibliothèque nationale de France, 700-1200. We're delighted that you can now explore it in full on the British Library's Digitised Manuscripts site, where you can drool over its sublime decoration and sumptuous script. You can also learn more about Psalters and Psalter commentaries in the  'Glossed Psalters' article on the Polonsky Medieval England and France website. 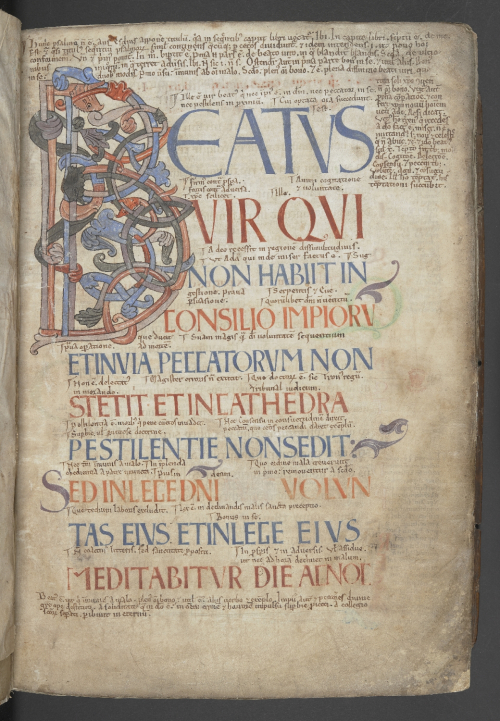 The Beatus-initial (Beatus vir), which begins the book of Psalms. Add MS 37517, f. 4r. Possibly from Canterbury, 4th quarter of the 10th century.

The Bosworth Psalter is written in Latin, in one of the translations traditionally ascribed to St Jerome (d. 420). Over a period of nearly twenty-five years, St Jerome worked on translations of biblical texts from Greek and Hebrew into the Latin vernacular; he completed three versions or revisions of the Psalms. The first was made from the Greek Septuagint version, and is now commonly known as the Roman or Romanum Psalter because it was adopted by the church in Rome. One reason the Bosworth Psalter is so special is the purity of its text of St Jerome’s Roman version of the Psalms. 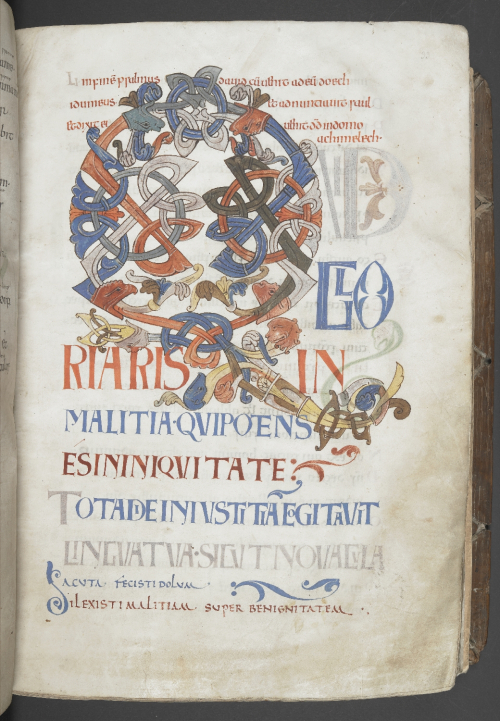 The Psalter’s large initials together with multi-coloured script divide the text in three parts at Psalms 1, 51 and 101, in a division of the so-called ‘three fifties’ that is found in English, but not most Continental manuscripts. The scribe used initials with interlace decoration, some zoomorphic elements and capital letters of varying size and colour to enhance the importance of these pages. At the beginning of Psalm 101, the first letter ‘D’'(omine) (Lord) is enhanced by delicate foliate forms. 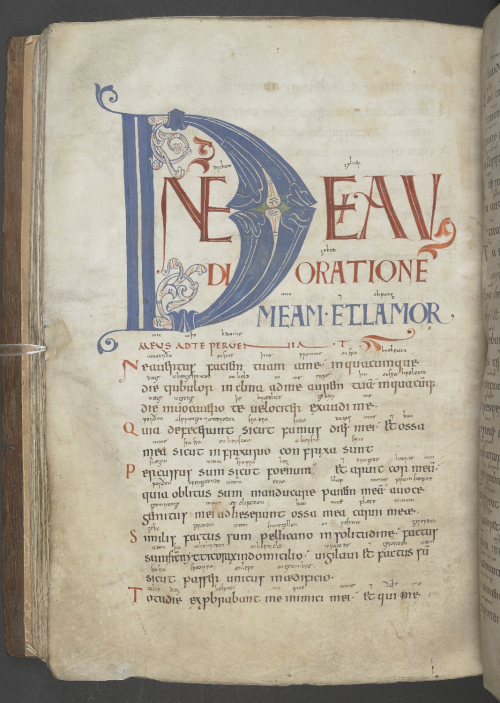 In addition to this threefold division, the other major divisions of a Psalter are also marked by large decorated initials, as in this initial for the beginning of Psalm 109, which in Benedictine monasteries is the Psalm sung at Vespers on Sundays.

The Bosworth Psalter was designed for use of a community following the Rule of St Benedict. In fact, it's the oldest English manuscript that includes all of the important texts of the Benedictine Office (Psalter, canticles, hymns and monastic canticles). 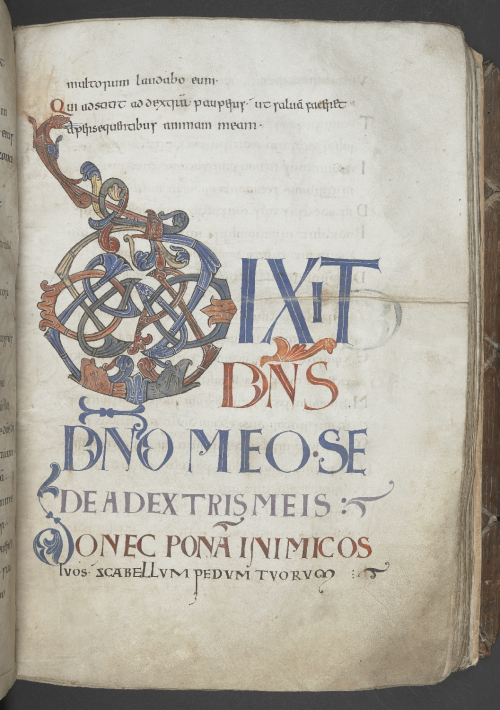 It is the earliest surviving manuscript of the 'New Hymnal' from England. This hymnal was developed on the Continent in the 9th century, and expanded the number of hymns used in monastic services. The greater diversification of hymns meant that monks were able to avoid daily repetition of same hymns. The practice of singing a much expanded variety of hymns spread to England with the English Benedictine Reform movement in the second half of the 10th century. Because of this inclusion, it is generally thought that the Bosworth Psalter was made in and for one of the monastic houses in Canterbury during the archiepiscopate of St Dunstan (r. 959–988), a prominent proponent of monastic reform in Anglo-Saxon England. 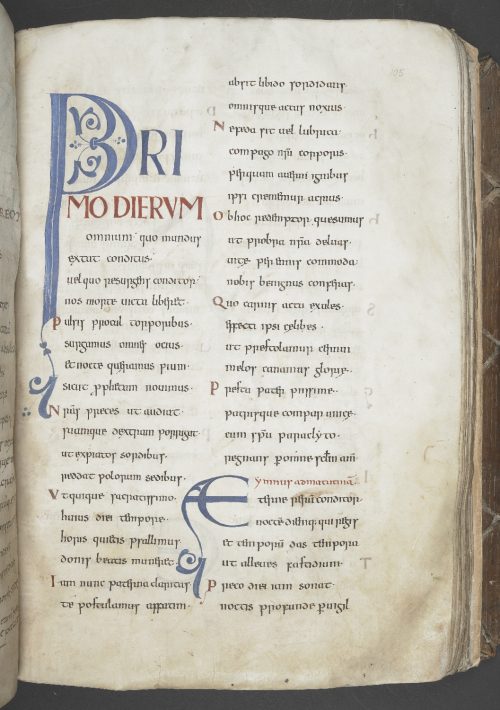 The manuscript acquired different layers of additions: some pages are covered with Latin commentaries spreading from margin to margin. 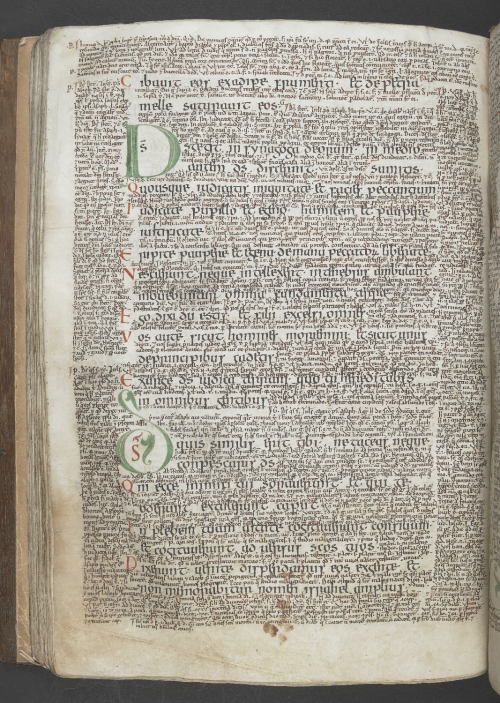 Another remarkable feature is that parts of the Psalter and some of the canticles were glossed with Old English words, written above the Latin text, in the early 11th century. We're sure you'd agree that the Bosworth Psalter is another superb addition to our Digitised Manuscripts collection. The magnificent artistry in the initials, and the importance of its text and annotations, make this a very special manuscript. Do go and explore this unique historical book online!