The medieval period had a fascinating relationship with colour, producing beautifully illuminated manuscripts, vibrant stained glass and other richly decorated artworks. It is surprising then, that during the later Middle Ages a new highly prized art form developed almost entirely in shades of grey. From the French word gris (‘grey’), the technique of grisaille was only used in luxury manuscripts and signified the wealth and social status of their owners. 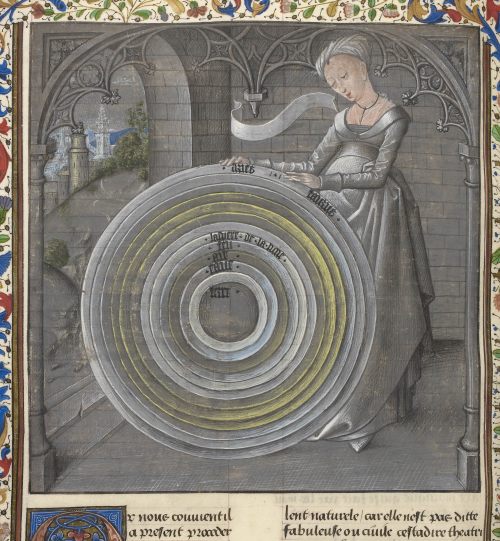 Miniature of Philosophy holding the planetary spheres, in a French translation of Augustine’s De civitate Dei, last quarter of the 15th century, from Royal MS 14 D I, f. 337v

The use of grisaille possibly originated in the 12th century, following an attempted ban on the use of colour in stained-glass painting made by the Cistercian Order. During the 12th and 13th centuries, windows decorated in grisaille rose in popularity and were installed in medieval churches alongside coloured glass portraits of figures. The Italian artist Giotto (c. 1267–1337) is credited with the first use of grisaille in wall painting in the early 14th-century allegorical fresco of the Seven Virtues and Vices. Featuring on the north and south walls of the Scrovegni Chapel, Padua, the monochrome figures of the Virtues and Vices are painted to resemble stone and marble sculpture. 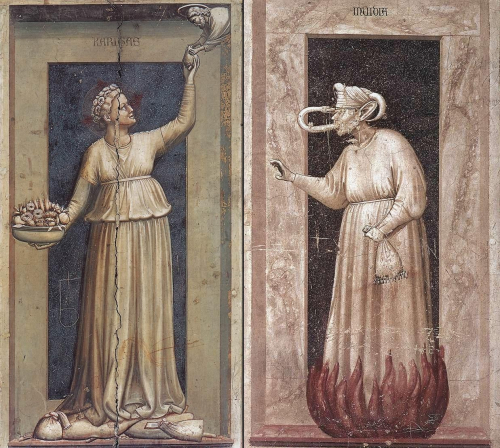 Manuscript illuminations began to feature grisaille painting from the first half of the 14th century onwards, and the art technique was used to indicate the manuscript’s status as a luxury product. The British Library houses several examples of the grisaille style of illumination, including a French Bible historiale in two volumes produced for Charles V of France in 1357 before his coronation as king in 1364. Both volumes (now Royal MS 17 E VII vol 1 and vol 2) open with large miniatures partially in grisaille. The second volume opens with scenes from the life of Solomon with a playful bas-de-page scene underneath of a lion, Charles V’s symbol. 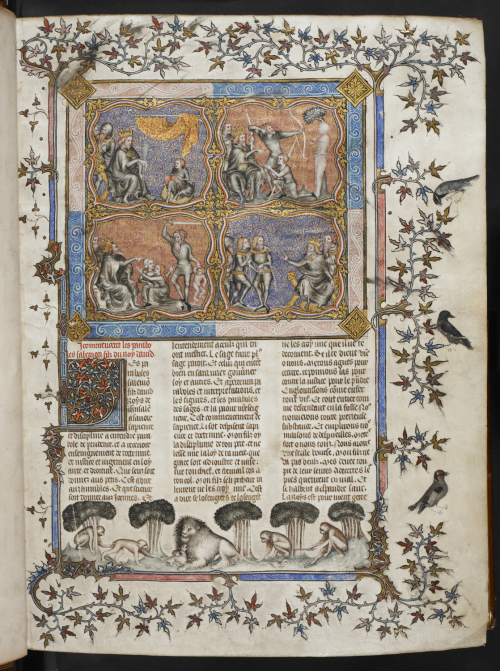 Opening page of Guyart des Moulins, Bible historiale with miniature of scenes from the life of Solomon and bas-de-page below of lion and monkeys, France, 1357, from Royal MS 17 E VII vol 2, f. 1r

Grisaille continued to be used in manuscript illuminations into the 15th and 16th centuries, as seen in a French translation of Augustine’s De civitate Dei (now Royal MS 14 D I) made for an unknown noble patron and featuring 11 miniatures in grisaille at the beginning of each book,  and containing a depiction of Philosophy holding the planetary spheres. Similar illuminations appear in a later copy of Caesar’s Commentaries on the Gallic War (now Harley MS 6205) produced for Francis I in 1519. The manuscript’s decoration was completed by a Flemish artist, Godefroy le Batave, including a dramatic night scene illustration of Caesar in battle. 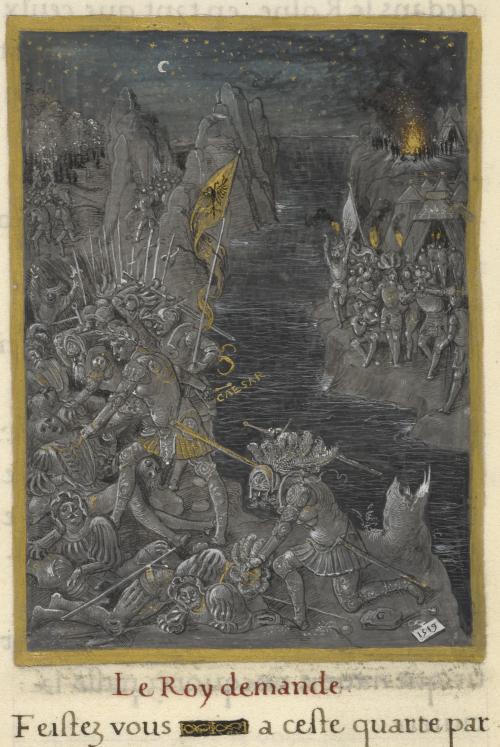 Monochrome painting techniques soon developed beyond the colour grey. A 16th-century luxury Book of Hours features beautiful examples of camaïeu decoration, that is, single-colour painting in any colour other than grey. This Book of Hours (now Add MS 35313) was possibly produced for Joanna ‘The Mad’ I, Queen of Castille and Aragon, and illustrated by two Ghent master artists known as the Master of James IV of Scotland and the Maximilian Master. The calendar pages at the beginning of the manuscript are accompanied by illustrations of the labours of the months and zodiac signs completed in colour, as well as medallions in camaïeu of imitation gold. These medallions illustrate the lives of saints that have feast days listed in the calendar. The November page medallions depict All Saints; the soul in purgatory; St Martin of Tours; St Clement; St Catherine; and St Andrew. They are ordered by appearance in the calendar page from earliest (top) to latest (bottom), and the feast days are written in red ink to highlight them. The medallions also appear to imitate wood panel and the careful highlighting and shadow provides a 3-D relief effect, much like Giotto’s earlier fresco panels. These medallions are best seen close up: you can zoom in on their fascinating detail on our Digitised Manuscripts site here. 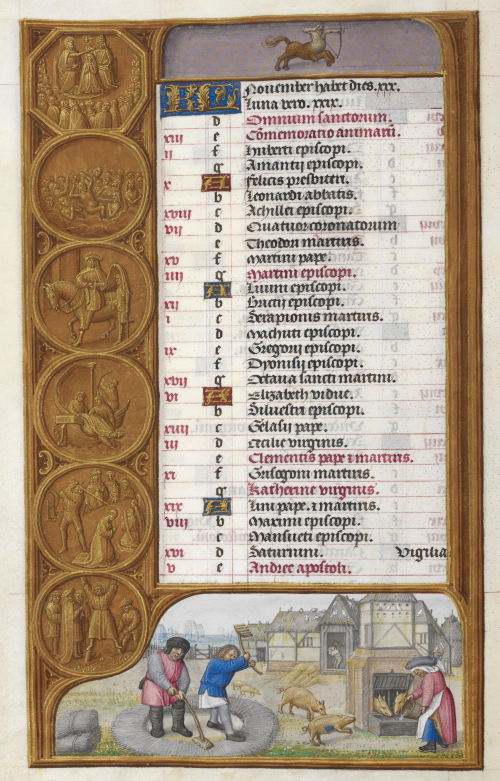 Calendar page for November bordered by medallions in camaïeu depicting saints’ lives, from the Hours of Joanna I of Castile, Add MS 35313, f. 6v