Inside the Tudor court

The House of Tudor reigned over England for almost a century and a quarter, and is renowned for its displays of indulgence. King Henry VIII (1509–1547) is especially associated with having led a luxurious and decadent lifestyle: he is thought to have squandered a large part of the treasure amassed by his father, King Henry VII (1485–1509), on banquets and festivities. Even so, their account books show that the Tudor kings, including Henry VIII, were very much interested in book-keeping, and did not simply throw money around at will. Such behaviour was thought to have a corrupting effect — it was portrayed as a shower of coins in a near-contemporary prayer-book commissioned by William of Hastings (d. 1483), Master of the Royal Mint. 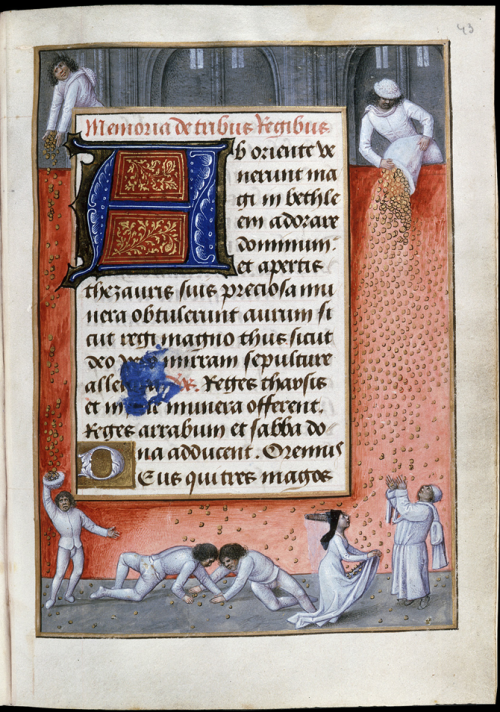 The British Library has recently digitised four account books of Kings Henry VII and Henry VIII. These two kings clearly kept track of their income and expenses by inspecting their account books. This is indicated by the fact that three of the account books, (partially) written by John Heron (1470–1522), Treasurer of the Chamber, include the kings’ signatures at the end of several of their entries. 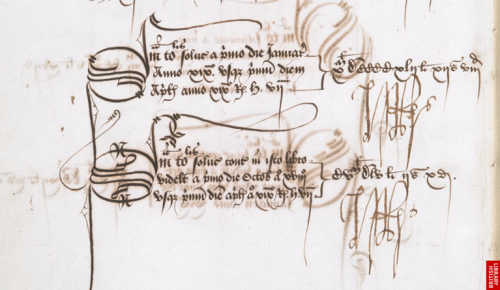 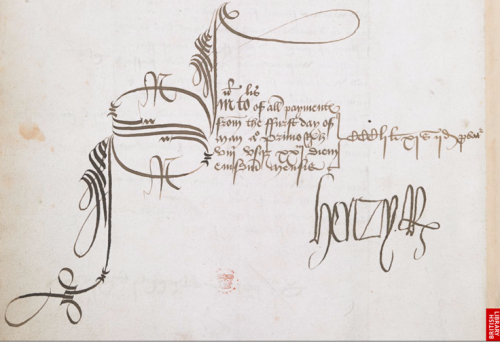 The household books give us an insight into the life and activities at the courts of Henry VII and Henry VIII. They contain records with payments for many types of labourer and artisan: gardeners, such as the ‘moletaker’; cooks, such as the ‘Frenche coke’ employed by Henry VIII; tailors, such as the ‘yeman of the robes’ and the ‘fethermaker’; falconers; trumpeters; crossbow makers and maintainers, known as the ‘grome of the crosbows’; clockmakers, such as Nicholas Kratzer, a German astronomer who was commissioned by Henry VIII to design an astronomical clock for Hampton Court; engravers, referred to as  the ‘graver of precious stones’; courtiers; soldiers; secretaries; ambassadors and other officials. They also document material goods, such as horses and greyhounds, as well as spiritual goods, such as alms and prayers.

One account book (Add MS 21481) contains a letter dated 23 January 1512 (ff. 347r–348v), in which Henry VIII orders John Heron to make payments to Gilbert Talbot (1452–1517), Lord Deputy of Calais, and Edward Poynings (1459–1521), military commander and diplomat, for ‘certain men of arms and houses in Flanders for our war’s purpose’ [‘certain men of armes and hooysse in fflaunders for oure werres use’] in preparation for a campaign against France. But the books also give insight into the kings' personal lives. For example, we can see that Henry VIII, several years after the annulment of his marriage with his fourth wife, Anne of Cleves, was still making payments directly to her and her treasurer Wymond Carewe, for ‘her officers and certain gentlewomen an gentlemen’ [‘her Officers and certeyn gentilwomen and gentilwomen’].

You can explore the world of the Tudor court for yourself by viewing the following household books online: