Richard the Lionheart in Speyer

A major new exhibition devoted to Richard the Lionheart has recently opened in Speyer, to which the British Library is pleased to have loaned three of our magnificent medieval manuscripts. The books in question can be viewed in Richard Löwenherz: König-Ritter-Gefangener (Richard the Lionheart: King, Knight, Prisoner) at the Historisches Museum der Pfalz until 14 January 2018. Alongside precious artefacts such as the Cross of Henry the Lion, the exhibition features the Psalter of Henry the Lion, Matthew Paris's Chronicles of England and pages from an illustrated, verse chronicle. Here we tell you a little more about the stunning Psalter on loan to the Speyer exhibition.

In February 1168, Henry the Lion, Duke of Bavaria and Saxony (b. 1129, d. 1195), married the 12-year-old Princess Matilda of England in Minden Cathedral. Matilda provided an important political connection for Henry: she was the third child and eldest daughter of King Henry II of England and Eleanor of Aquitaine, and she had four surviving brothers, including Richard the Lionheart. The ducal couple had five children, the last of whom was William of Winchester, who was born while Matilda was in England, as his epithet suggests. Matilda died a few days before her father, in the summer of 1189, so she did not live to see her brothers, Richard the Lionheart and John, become kings of England. Nevertheless, her descendants also became kings: the current English royal family is descended from William of Winchester through the ducal house of Brunswick-Lüneburg and the royal house of Windsor. 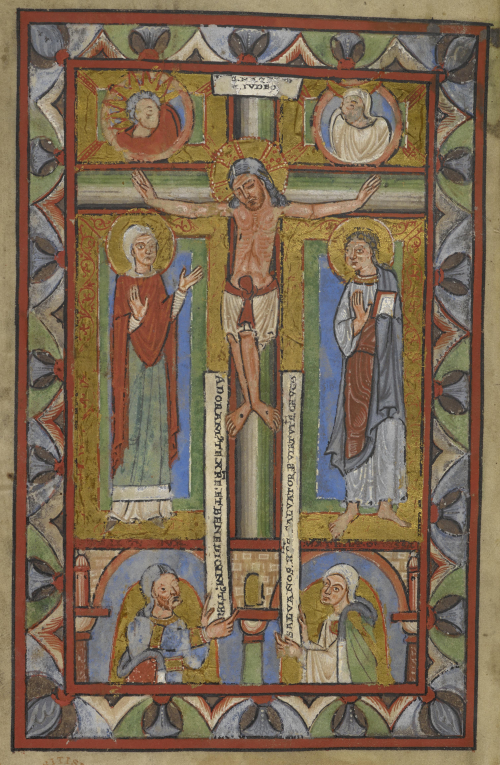 Representation of the Crucifixion with a portrait of Henry and Matilda (below), from Lansdowne MS 381/1, f. 10v

A portrait of Henry and Matilda is preserved in an image that originally formed part of a luxury copy of a Psalter (British Library Lansdowne MS 381/1). The ducal pair appear below a representation of the Crucifixion, and opposite the Resurrection. They are identified with their names and titles ‘Henricu[s] dux’ (Duke Henry) and ‘Mathilt[a] ducissa’ (Duchess Mathilda) just above them, and each holds a scroll with a text appropriate to the scene above, from the Feast of the Inventio Crucis (the Finding of the Cross). Henry’s scroll reads ‘Adoram[us] te xre [Christe] et benedicim[us] tibi’ (We adore you, O Christ, and we bless you), while Matilda’s declares ‘Salva nos xre [Christe] salvator p[er] virtute[m] crucis’ (Save us, O Saviour Christ, by the virtue of the Cross). Calendar page for the month of September portraying the zodiac symbol of Libra and the month’s labour of wine-making, from Lansdowne MS 381/1, f. 5v

Only eleven leaves from this small Latin Psalter are preserved, but they give an indication of just how splendid the book must have been originally. Psalters include the book of the Psalms, but also other texts that add to the book’s devotional character, such as a calendar, which provided its user with information about saints’ days and other holidays. In the Psalter of Henry the Lion, six months of the calendar survive, showing the saints’ days for June to December. In most Psalters the Canticles and personalized prayers and litanies follow the Psalms, but these are not among the surviving leaves of the Henry the Lion Psalter. 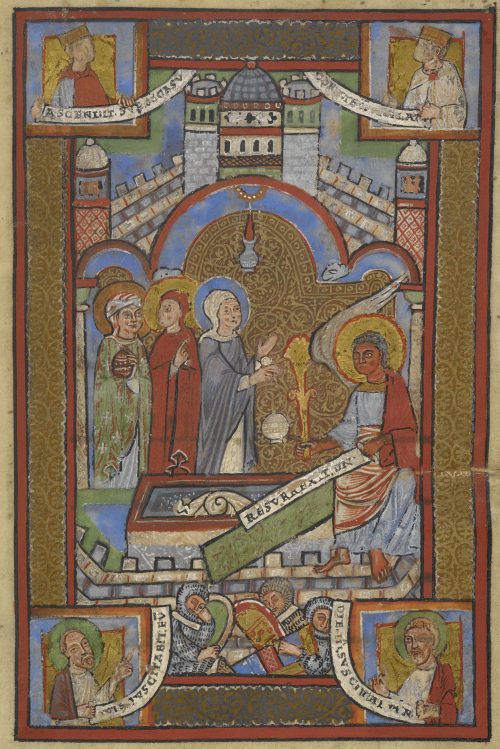 Representation of the Resurrection, from Lansdowne MS 381/1, f. 11r

Particularly opulent Psalters, like this one, also featured full-page devotional images, usually placed before the Psalms. Two such paintings survive in the Henry of Lion Psalter (the Annunciation and the Presentation), but, more unusually, full-page scenes also appear at important divisions of the Psalms itself. For example, the Duke and Duchess were placed right before the beginning of Psalm 101, as is clear from the text on the other sides of the Crucifixion and Resurrection scenes. This is an important position in the book, at a division of one of the so-called ‘three fifties’, dividing the Psalms into three groups, and at a point where a donor portrait sometimes appears. 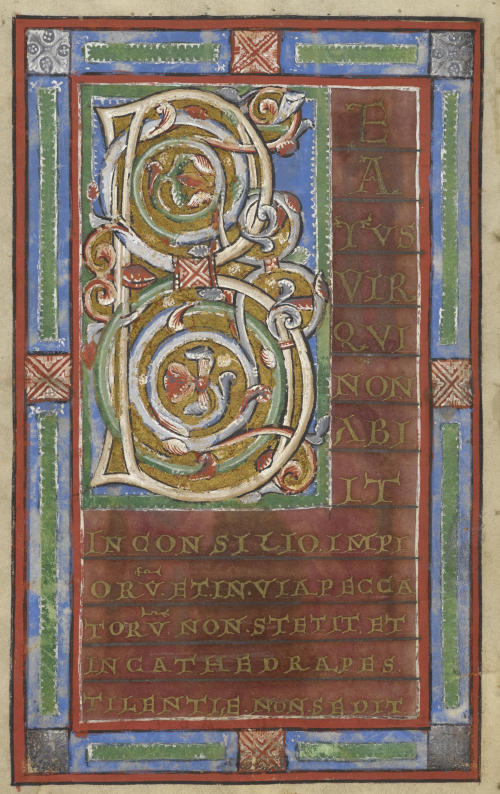 The decoration and painting in the Psalter is of high quality, and includes precious materials. Moreover, the beginning of Psalms 1 and 101 and the calendar pages are written on a stained or painted purple background, and written in liquid gold ink. Purple is replete with both imperial and spiritual references; certain Roman emperors famously reserved the use of purple clothing for themselves, and books, too, written on purple were high-status objects. In a Christian context, the purple also may refer to the blood of Christ’s sacrifice, while the gold and silver reflected the preciousness of the sacred text itself. The richness of the illumination is appropriate as well to the status of the book’s princely owners.

The Psalter of Henry the Lion together with the Chronicles of England (Cotton MS Claudius D VI) and the illustrated verse chronicle (Cotton MS Vitellius A XIII/1) can be viewed in person at the Historisches Museum der Pfalz in Speyer until 15 April 2018. We would be delighted if you were able to visit the exhibition; but if you can’t get to Germany, you can also see all three manuscripts online in full on the British Library's Digitised Manuscripts website.

Royal house of Windsor? That is what George V made of it. It is actually called Royal house of Sachsen Coburg Gotha. He thought this change would make his family sound less German what of course they actually are more than they are British