There was once a scribe named Walter, a canon and deacon who lived at Cirencester Abbey in the latter part of the 12th century. And that is practically all we know of him. With little biographical information, is it possible to make personalities of the past feel closer? Studying Walter’s handwriting can actually take us a little bit further. He is known to us from his meticulous scribal work and the marginal notes that he made in surviving manuscripts.

Walter’s hand appears throughout an exceptionally early copy of the letters of Thomas Becket (Cotton MS Claudius B II), dating to the 1180s, both in the main text and in the margins. (We have recently digitised this manuscript as part of The Polonsky Foundation England and France Project, and it can be viewed in full on the British Library's Digitised Manuscripts site.) Walter’s notes compare the manuscript’s text to that of another rescension, which he calls his exemplar or the alius liber, the ‘other book’. His heightened editorial interest in this text suggests he was keenly aware of the political importance of Becket’s letters, assembled only a few years earlier by Alan of Tewkesbury, and which laid out the murdered archbishop’s dispute with King Henry II (1154–1189). According to Michael Gullick, Walter probably worked on the manuscript over several years, in a self-directed campaign (‘A twelfth-century manuscript of the letters of Thomas Becket’, in English Manuscript Studies 1100–1700, 2 (1990), pp. 1-31).

Walter's notes highlight disparities between the two books. For instance, on one page a Latin note appears in the margin beside a rubric stating that the following letter is from ‘Thomas the Archbishop of Canterbury to Margaret Queen of the Sicilians’. It tells us that in his other book, in alio libro, the text names her as Matilda, Matildi. As a Queen of Sicily named Margaret actually lived between 1135 and 1183, we can conclude that, in this instance, the version we are looking at here is more accurate than the ‘other book’. Walter placed a line and a dot above the ‘in’ of his note (which is abbreviated). The same symbol appears above the word ‘Margerete’ in the rubric, to help match them up. 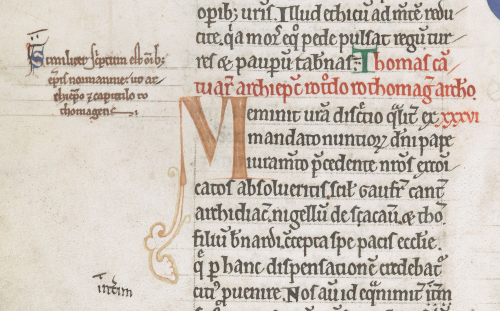 The notes are not mere musings. This is demonstrated both by their meticulously composed content and their decorative treatment. For example, now and again Walter added a coloured initial to the manuscript. Again, we can tell what part of the text this note relates to from matching symbols in the margin and in the text proper (look to the left of the green ‘T’). In some cases, Walter even arranged his notes in an elaborate shape. 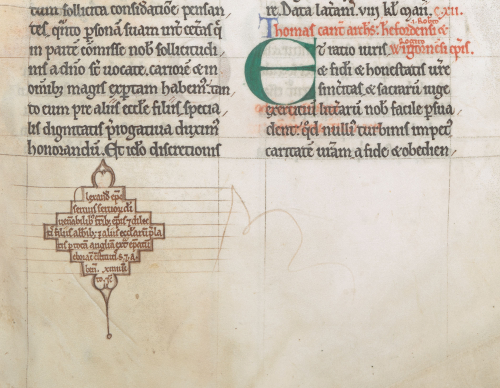 For instance, this diamond with stepped sides and ornate finials shows particular commitment to the decorative cause. But there is one delightful glimpse in this manuscript of fallibility. Finding a mistake can sometimes feel like meeting the person behind the script for the first time. So let’s ‘find’ Walter. 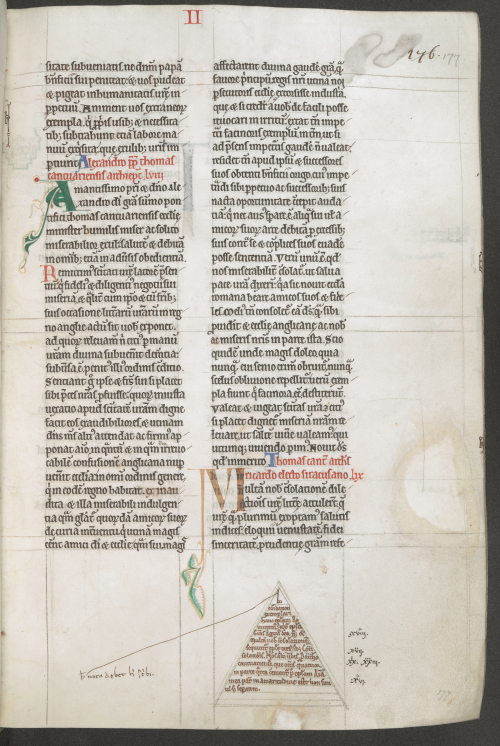 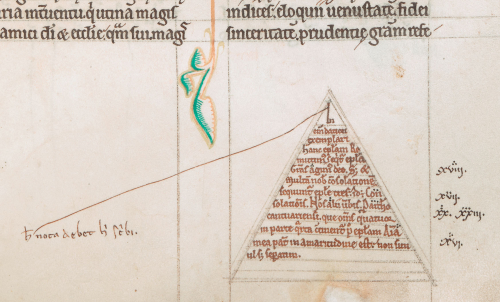 Mistakes may be rare, but they can allow us to glimpse the personality behind the pen: Cotton MS Claudius B II, f. 177r

In column two of one page about half-way through the book, Walter carefully outlined and ruled a triangle, filling it with neat lines of script. When proof-reading the text, however, he must have kicked himself. Drawing a line from the top of the triangle to the space beneath the first column, he directed the reader to a confession in chastened cursive script: ‘I should have written this note here.’

What's the significance of the marginal vertical line figures, similar but varying in detail? Eg f.3r, 4r etc. Emphasis?
Appears to be in the same ink as the original ms, and not by Walter.
Interesting post thanks. Brendan

Thank you for your question! They are elongated ‘Nota’ abbreviations (see the elongated N, T at the top, central O and little A at the bottom), alerting the reader to important bits in the text.