A calendar page for October 2017

Hard to believe it, but it is now October. Let’s see what one of our favourite artists, the ever-creative talent behind Add MS 36684, has given us for this, the tenth month. If you’d like to know more about Additional MS 36684, check out January’s post, and for more on medieval calendars, please see our calendar post from 2011. 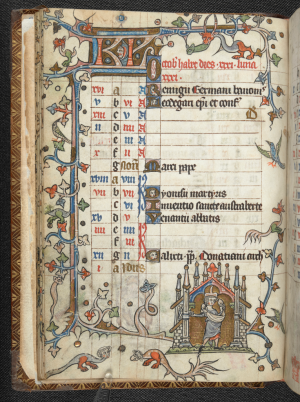 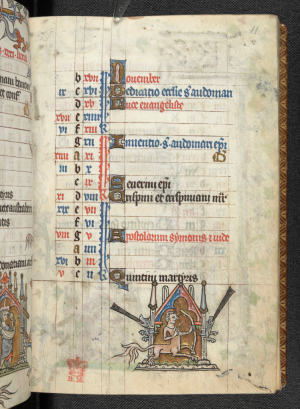 The labour of the month for October, found at the bottom of the first page of October’s calendar, is somewhat ambiguous. The labourer stands in the usual gilded niche, and appears to be outdoors, given the greenery around his feet. He wears a sling made of cloth around his neck, to hold whatever he has been gathering or is planting. October’s labour is usually either planters sowing fields (as in the Hours of Joanna of Castile) or gathering grapes to make wine (as in the London Rothschild Hours). Another possibility is that the labourer is shown gathering acorns for animal feed. On the second page, we have our next misplaced zodiac figure (as we pointed out in in August’s post): a centaur armed with a bow, the traditional figure for Sagittarius, which is the star sign spanning the second half of November and first part of December. The centaur has a particularly majestic tail, which extends out beyond the niche and into the margin. Sagittarius’s index and middle fingers on his right hand are raised in what might look to modern viewers as the ‘peace’ sign, but are in fact the two fingers used to grasp a bow string. We would wish him happy hunting, but he appears to have forgot something important — his arrows! A reminder that you can browse the whole of Additional MS 36684 in high definition on our Digitised Manuscripts site. The leaves are changing and the days are about to get much shorter — make sure you’ve gathered enough acorns and made enough wine to survive the coming winter.

Well of course! A peaceful centaur would have discarded his arrows.