Today we're living easy, living free because we're on the highway to Hell! We have a season ticket on a one-way ride to explore the Hell-mouth, a popular depiction of Hell in illuminated manuscripts. 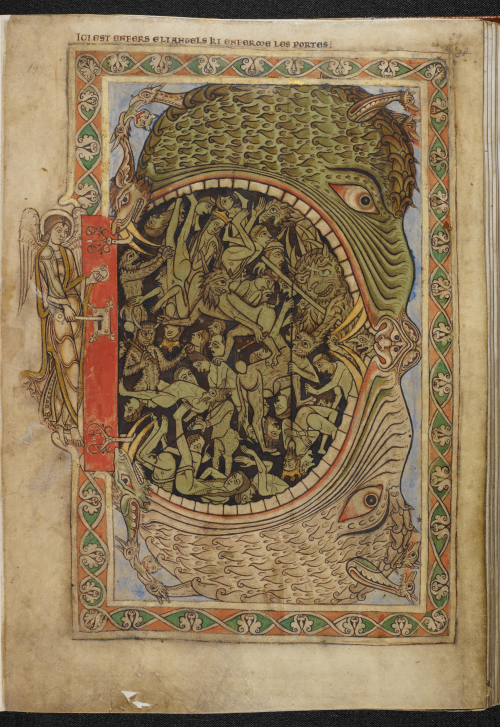 Imagery of the Hell-mouth has been used from the early medieval period, as the gaping mouth of a beast or serpent filled with the tortured souls of the damned. This image may have originated in Anglo-Saxon literature, with a number of surviving works describing Hell as the mouth of a beast or the Devil himself. One late 10th-century collection of religious texts now known as the Vercelli Book, currently housed at the Biblioteca e Archivio Capitolare di Vercelli, northern Italy, contains a quotation in Old English comparing the Devil to a dragon swallowing human souls:

'came they never out of the pit of snakes and of the throat of the dragon which is called Satan' (Homily 4:46-8: transcription from The Digital Vercelli Book; translation from D. G. Scragg, ed., The Vercelli Homilies and Related Texts (Oxford: Oxford University Press, 1992)).

This type of imagery inspired illustrations in contemporary manuscripts like the New Minster Liber Vitae (now Stowe MS 944). Produced in Winchester, this manuscript features 11th-century prefatory drawings including dramatic scenes of the Last Judgement that stretch across two folios. The top illustration shows angels leading souls to St Peter, who holds open a door to the Heavenly Jerusalem. In the middle scene, two saints watch on as St Peter and a demon fight over a human soul. In the final scene below, Archangel Michael locks the door to Hell as a demon drops struggling souls into the open mouth of a beast, the Hell-mouth. 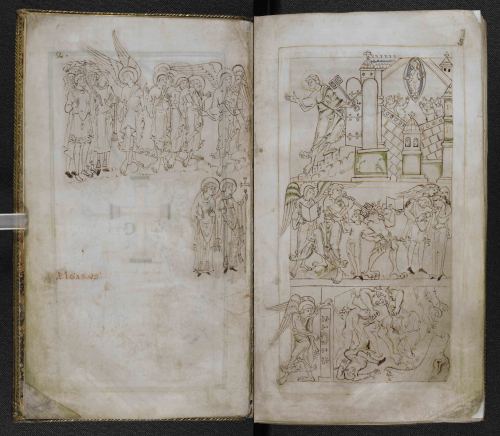 An almighty scene: a depiction of the Last Judgement with the Hell-mouth in the bottom illustration, from the New Minster Liber Vitae, Stowe MS 944, ff. 6v–7r

Hell-mouths continued to appear in manuscript illuminations throughout the Middle Ages, becoming more imaginative and wonderfully gruesome in their decoration. The Winchester Psalter (now Cotton MS Nero C IV), produced in the 12th century, contains an elaborate miniature cycle of the Last Judgement, featuring the toothy Hell-mouth of a beast filled with grinning demons tormenting human bodies, including one demon spearing an upside-down king with a pitchfork. Ghastly images like this miniature reminded medieval Christians that judgement awaited them also after death: if they passed, they could join the angels in heavenly paradise; if they failed, they faced eternity in the jaws of Hell. 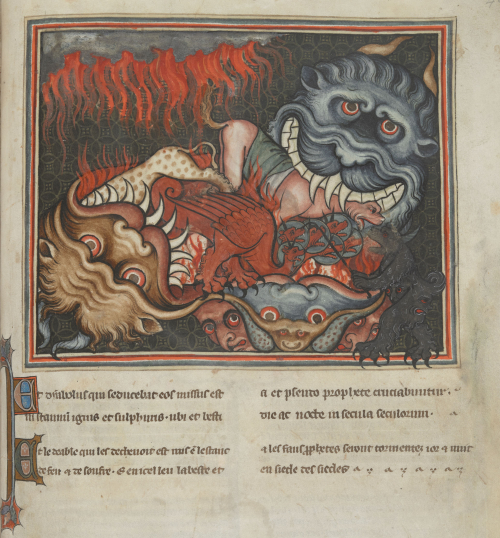 Illustrated Hell-mouths were particularly popular in Apocalypse manuscripts, works that contain copies of the Book of Revelation. This text is the final book of the Bible, featuring lurid visions of the struggles between good and evil before the Last Judgement. In a 14th-century French Apocalypse composed in both Latin and French (now Add MS 17333), images are used to depict the text, like a three-headed Hell-mouth illustrating the following passage from Revelation 20:10 (f. 43r): 'And the devil that deceived them was cast into the lake of fire and brimstone, where the beast and the false prophet are, and shall be tormented day and night for ever and ever.' Three creatures likely representing the devil, beast and false prophet of the text are consumed by fire and brimstone within the wide jaws of the Hell-mouth. A demon can even be seen prodding a six-headed beast with a poker.

A 15th-century Book of Hours known as the Bedford Hours (now Add MS 18850) similarly contains scenes from the Last Judgement at the opening of the Office of the Dead, a prayer cycle commonly read for deceased loved ones in order to help their souls reach Paradise. The accompanying miniature acts as a visual reminder to readers of what awaited them after death: elaborate detail and decoration to glorify Paradise and gore-ify Hell. Christ appears enthroned in judgement over human souls, flanked by saints and angels. Souls that have passed judgement are greeted by angels as they reach Heaven. The damned souls below are forced into a fiery Hell-mouth, and roundels feature demons grinning as they beat human figures with mallets and turn a torture wheel. 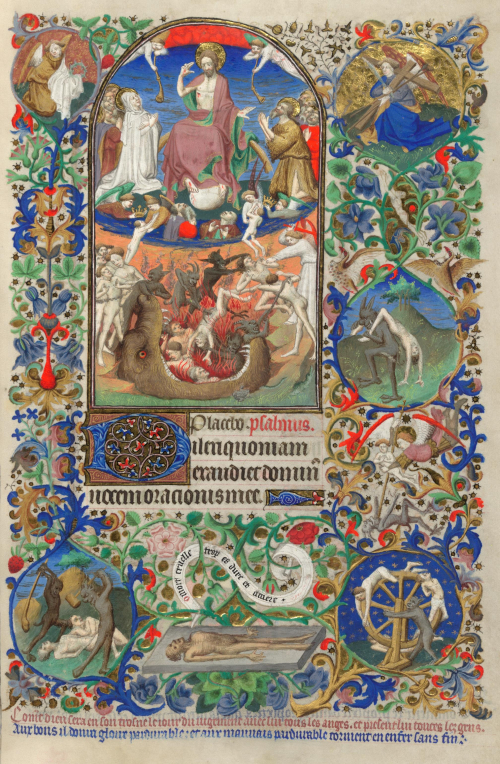 Glorification of Heaven, Gore-ification of Hell: Hell-mouth in a full-page miniature depicting the Last Judgement, from the Bedford Hours, Add MS 18850, f. 157r

However, according to AC/DC, there is a bright side to ending up as a snack to a Hell-mouth:

My friends are gonna be there too! 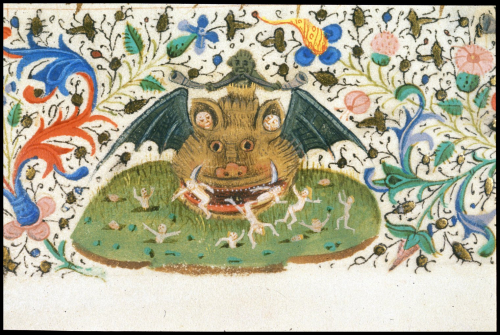 Like a bat into Hell: Detail of a marginal drawing with a bat-like Hell-mouth devouring souls, from Harley MS 3999, f. 21r