Purple pages at the Ashmolean

How have humans depicted and talked about gods? Some answers to this question are presented at the exhibition Imagining the Divine, which is on at the Ashmolean Museum in Oxford until 18 February 2018. This exhibition focuses on the 1st millennium AD — a time which witnessed the development and expansion of several major world religions — and it shows how different religious traditions influenced and interacted with one another. The British Library is delighted to have loaned a number of manuscripts to the exhibition which exemplify that theme. 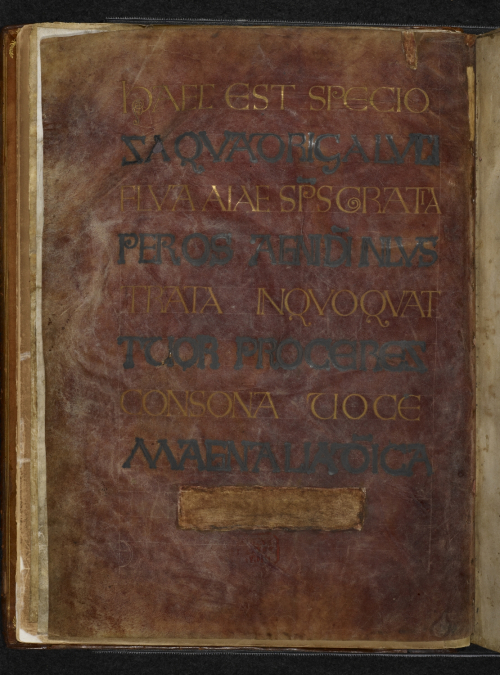 One of the manuscripts that can currently be seen at the Ashmolean is the Royal Bible (Royal MS 1 E VI), which was probably made at Canterbury in the early 9th century. Its ninth-century scribes created at least three pages covered in a deep purple colour, with text written in silver and gold. Pages dyed or painted purple had been created in the Mediterranean earlier in the first millennium. Purple was a colour reserved for the clothes of Roman emperors and it had connotations of power and luxury. 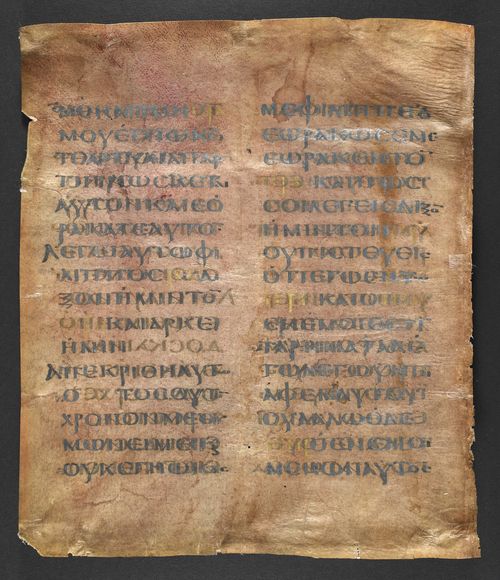 In a Christian context, purple pages and text in gold silver represented the glory of heaven. As the text in a late 8th-century gospel lectionary (Paris, BnF nouv acq lat 1203, f. 126v) put it:

The Thunderer's shining kingdoms of the starry heavens,

Revealed in rose-red blood, disclose the joys of heaven ...

Striking ‘purple pages’ were used in sacred texts throughout and beyond Europe. The Ashmolean’s exhibition also features a Qu’ran from Baghdad with deep blue pages. Like the Royal Bible, it was made in the 9th century. 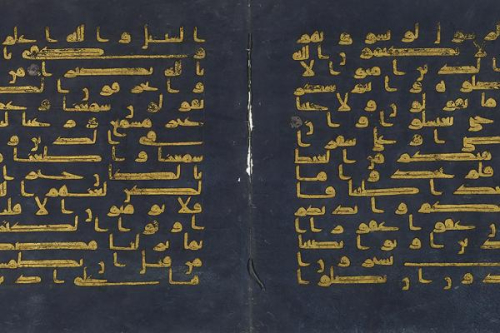 The ‘blue Qu’ran’ on display at the Ashmolean Museum, from the Sarikhani Collection

The exhibition also shows how much work went into the showpieces that the scribes produced. On display is an end page of a British Library manuscript (Royal MS 15 A XVI) where different scribes have copied words or fragments of prayers and hymns. At the top of the page, someone has practised drawing interlace decoration. This type of decoration is found in manuscripts throughout northern Europe and also in metalwork and sculpture. Other examples are on display in the exhibition. Underneath the interlace is a very rough sketch of a man with a shield. 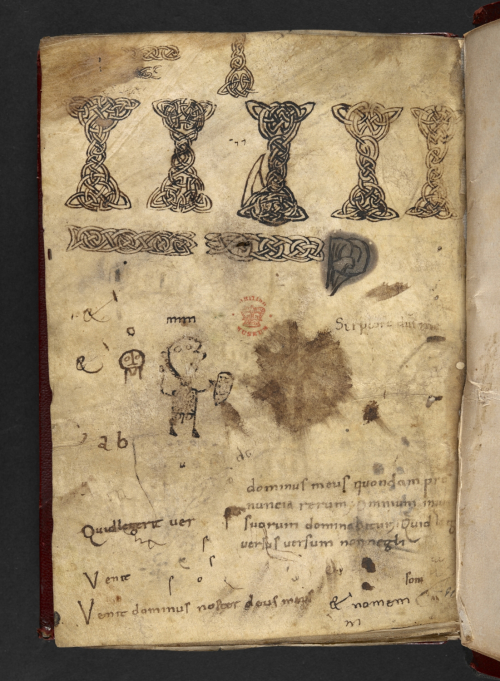 The rest of the manuscript contains riddles, a poem on the Gospels, a glossary of Greek words and a copy of Bede’s textbook, On the Art of Poetry. These texts were written by Northumbrian, West Saxon and Iberian authors. However, judging by this manuscript’s ink and script, it was mostly copied in what is now France, before coming to England, which is probably where the scribes added the pen trials. Detail of pen trials of interlace from Royal MS 15 A XVI, f. 84v

Other items loaned by the British Library to the exhibition come from the Asian and African collections. These include a copy of the Book of Exodus in Arabic script (Or 2450); a copy of the Heart Sutra from China, where the text is written in the shape of a stupa, or shrine (Or 8210/S4289); and an 8th-century Qu’ran (Or 2165). If you get a chance, you can visit the Ashmolean and see them all!