A calendar page for November 2017

Ah, November – the days are shorter and it’s getting colder! Let’s dive into the 11th month as shown in Add MS 36684. If you’d like to know more about this fascinating Book of Hours, see January’s post, and for more on medieval calendars, check out our calendar post from 2011. 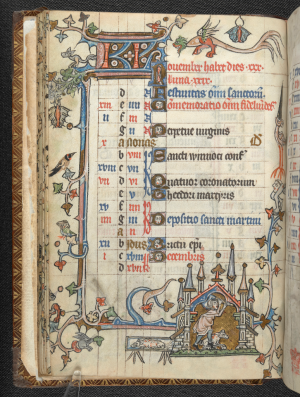 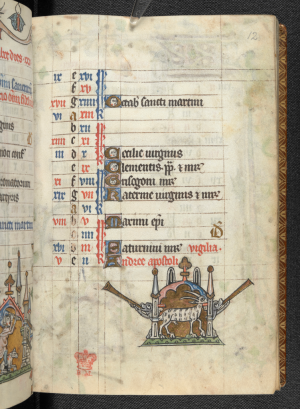 The first page of November’s calendar is a riot of colour and decoration. Crowning the page is a lizard-bird hybrid creature, with a green head, lurid red lips, red feet and a long, feathered tail. 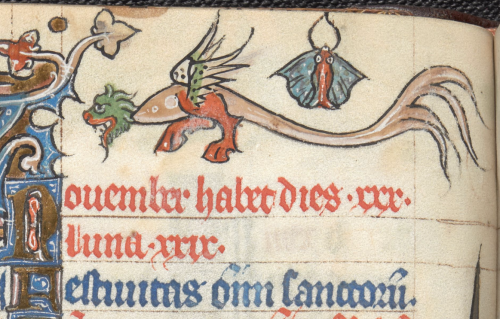 The right margin – known in medieval manuscript parlance as the ‘gutter’, because it falls between the two bound pages – includes the intriguing combination of a tonsured male head stuck between two long legs. Above him stands a stork-like figure with bright orange, spindly legs and a long, pointed beak.

November’s labour of the month is arguably the creepiest scene we’ve had in this calendar, but how was it perceived by contemporary audiences? Our labourer wields an enormous axe. The animal in a box next to him is likely a hunting dog used to help capture the boar depicted at the labourer’s feet. The boar is about to be stunned with the back of the axe, before being slaughtered. This method is called ‘poleaxing’ and is the origin of the modern term. A poleaxe is a butcher’s axe with a hammer as well as a blade. 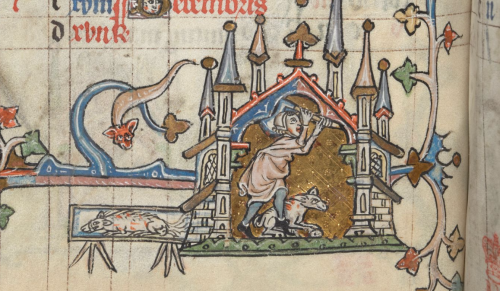 A similar scene of slaughter for the month of December appears in the Bedford Hours (f. 12r), except the figure holds a giant mallet.

Slaughtering livestock at the beginning of winter ensured the animals were killed before they began to lose the weight gained over summer and autumn. Rural communities could then feast on the fresh meat and preserve as much as possible for the year’s meanest months. In fact, Blotmonath (blood month) was the Anglo-Saxon name for November. This may seem sinister to us now, but for them it must have held a promise of winter feasts and nourishment when food was scarce.

November’s calendar finishes on the second page with the zodiac figure of Capricorn, shown as a goat. As we discussed in August’s post, the artist is ahead of himself with zodiac figures; Capricorn is normally shown in December, as its period is December-January. 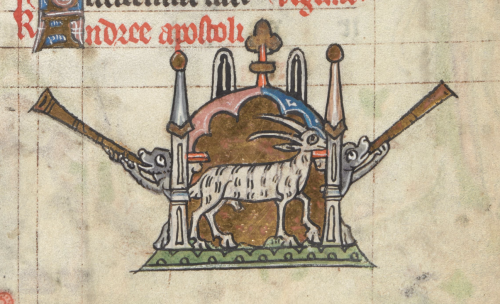 Please do go and browse all of the wonderful Add MS 36684 in high definition on our Digitised Manuscripts site.

The identification of the image as a hunting dog is not correct. This is clearly an image of the slaughter of the pig. The man has the axe raised over the pig's head. The composition is very similar to Royal 2 B III f.7v (http://www.bl.uk/catalogues/illuminatedmanuscripts/ILLUMIN.ASP?Size=mid&IllID=30576). I have a scholarly article about images of pig butchery (using many BL images!) coming out in a few months and can confirm that this part of the image is a classic representation of that practice. It may be in the wrong month (since the slaughter is usually Dec), but there is no doubt about what is being shown.

What is unique about this particular image is the pig in the box on the left. I have never seen this before! It is certainly a pig as evidenced by the tusks and raised hairs on the back. The function of the box is very unclear here, but it could be some sort of holding pen for the pig before slaughter. I will definitely be on the look out for more images to confirm that interpretation.