A new exhibition, The Venus Paradox, opened this September in Nicosia in Cyprus. It celebrates Venus, goddess of love, and the stories she has inspired through the ages. According to legend, Venus — or Aphrodite as she was called by Greek authors from Hesiod onwards — rose from the sea foam wearing a golden crown and was wafted over the waves to the island of Cyprus, where she was clothed with heavenly garments. The exhibition focuses on Venus’s place in the western artistic tradition, in both image and text, and her significance for the island of her birth. One of the British Library's exquisite Boccaccio manuscripts is part of this show. On display is an image of Venus as she appears in a 15th-century volume that has links to another very strong woman (see below). In the image, Venus is depicted as the Queen of Cyprus, wearing a crown (the rubric reads, ‘tres ancienne royne des cipriens’). This is one of 106 glorious illustrations of Des cleres et nobles femmes, an anonymous French translation of ‘De mulieribus claris’ (Concerning famous women). Considered the first collection of biographies in western literature devoted exclusively to women, this popular work, first completed in 1361, provides a fascinating insight into medieval attitudes to women, in a time of changing attitudes. In the section on Venus, Boccaccio discusses various beliefs about her, including her disputed origins (was her father a king of Cyprus or Jupiter himself?), and the assertion that Cupid was her son. Her great beauty is compared to the planet, Venus, but she is harshly judged for her licentiousness; having been unfaithful to both husbands, Vulcan and Adonis, she is accused of the ‘shameful madness’ of founding the first public brothels in Crete.

This precious and beautiful volume is already a celebrity: the opening page with a four-part image and a gorgeous rinceaux border was displayed in our 2011 exhibition, Royal Manuscripts: The Genius of Illumination. 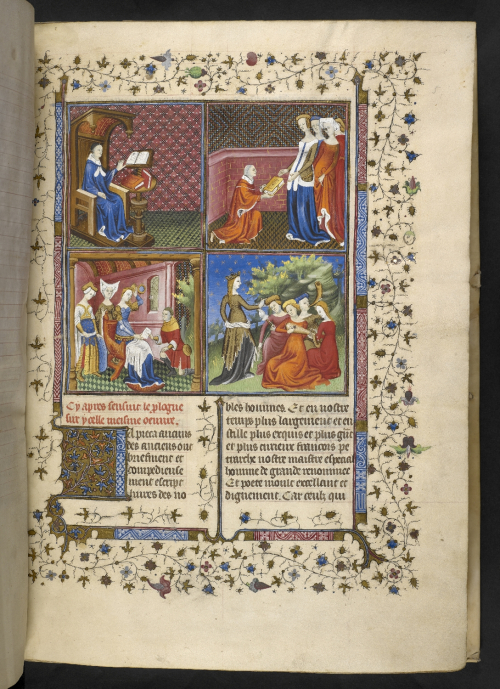 A frontispiece in four panels of Boccaccio reading a book, Boccaccio presenting the book to Andrea Acciaivoli, countess of Altavilla, a messenger presenting a letter to Semiramis and a queen with four female musicians, Paris, 1st quarter of the 15th century: Royal MS 20 C V, f. 5r

It is no surprise that its former owner of this manuscript was wealthy and powerful, a member of the illustrious Beaufort family, probably Lady Margaret Beaufort, one of Britain’s earliest ‘tiger mothers’. She was determined her son, Henry, would become King of England, even if she had to found a new dynasty in the process! She achieved her aim in 1485, when he was crowned King Henry VII aged 28, the first of the Tudors. Perhaps she was inspired by some of the stories in this work, though she is known to have been extremely devout, so it is unlikely Venus was a role model for her. 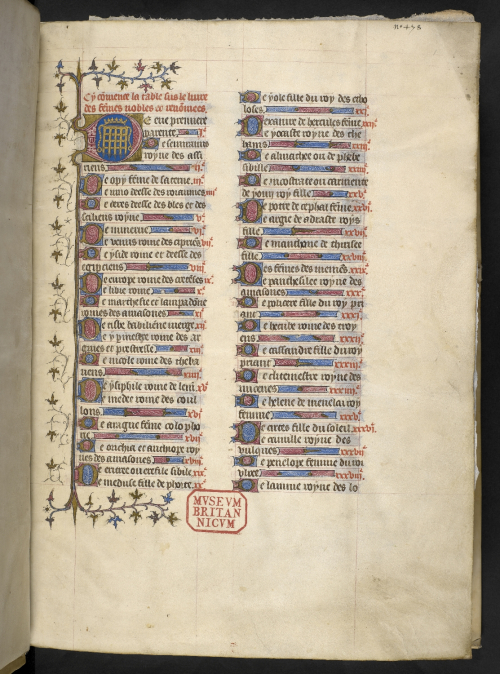 The opening folio has an added initial 'D' containing the Beaufort badge of a portcullis and chains surmounted by a coronet. James Carley has suggested that this manuscript is 'possibly to be identified as the "greatte volume of velom named John Bokas lymned" owned by Lady Margaret Beaufort' (The Libraries of King Henry VIII (2000) p. xxiv).

Venus is described on the Pafos website as ‘mother, woman, mistress, huntress and seductress’. Here are a variety images from our manuscripts depicting the goddess in her many guises, as she was seen in the Middle Ages. 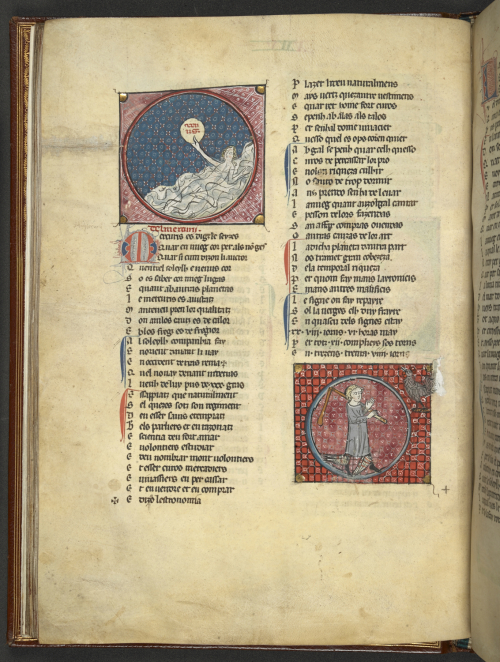 Venus with a mirror, emerging from the sea, from Matfre Ermengaud, Breviari d'Amor, France, S. (Toulouse?); 1st quarter of the 14th century: Royal MS 19 C I, f. 41v (this manuscript was recently featured in a blogpost on Occitan manuscripts) 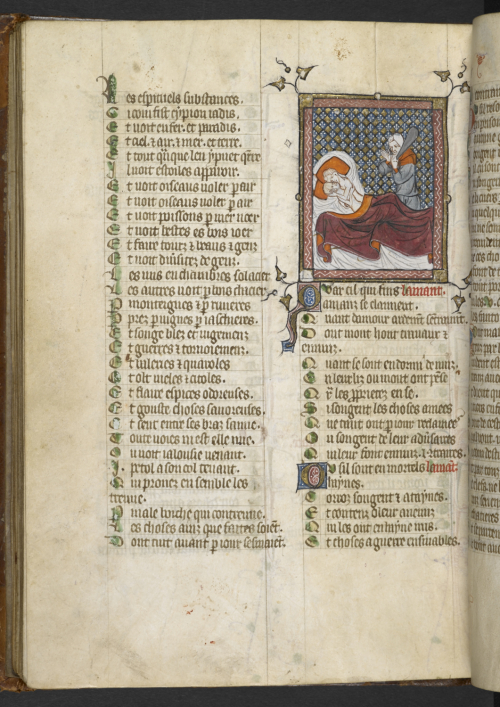 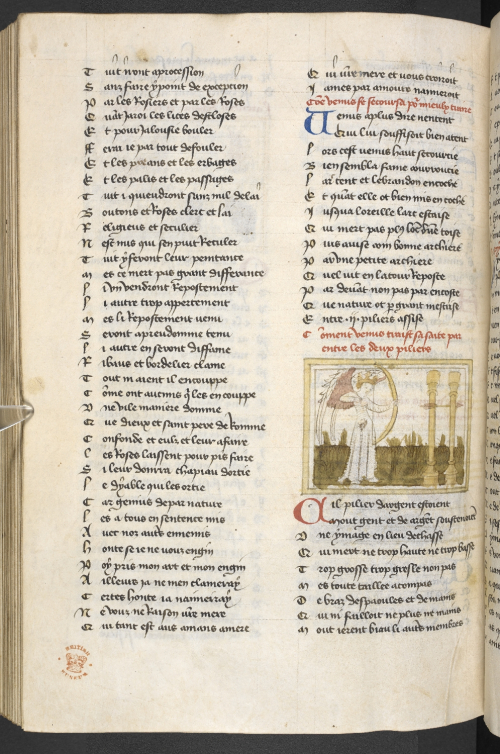 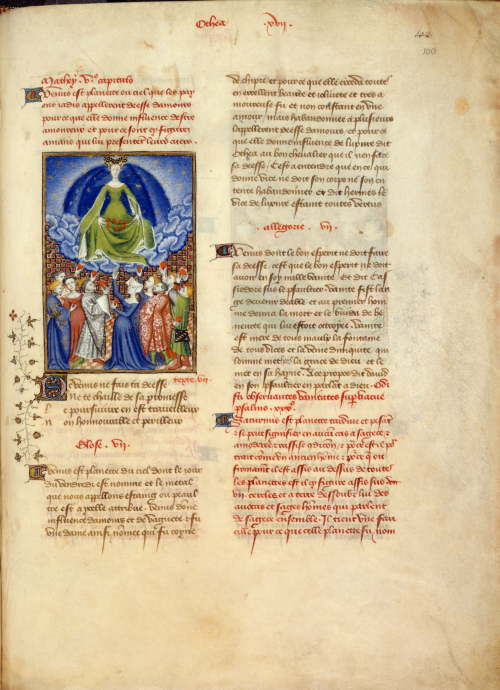 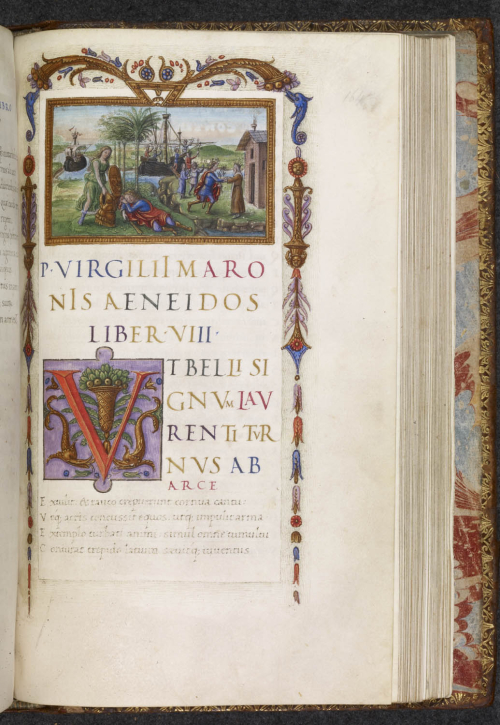 Miniature of Venus arming Aeneas in the foreground, and on the right, Aeneas meeting Evander, at the beginning of book VII of Virgil's Aeneid, Italy, Central (Rome); between 1483 and 1485, King’s MS 24, f. 164r 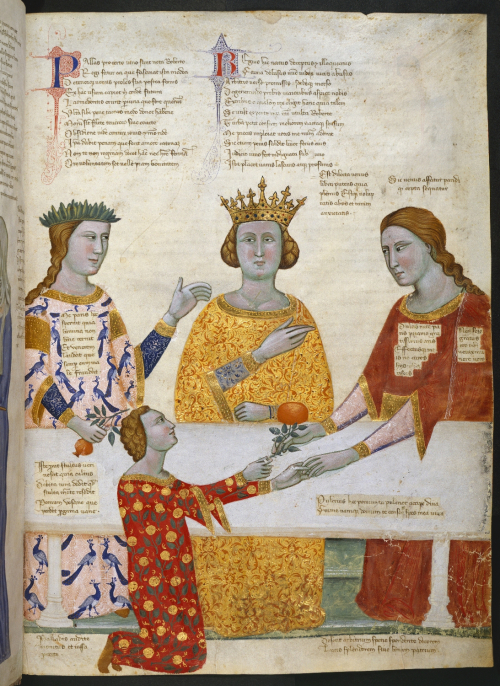 Miniature of the Judgement of Paris, with Pallas Athena, Juno and Venus sitting at a table, and Paris giving an olive branch to Venus, in the Convenevole da Prato, Italy, Central (Tuscany); c. 1335–c. 1340: Royal MS 6 E IX, f. 22r 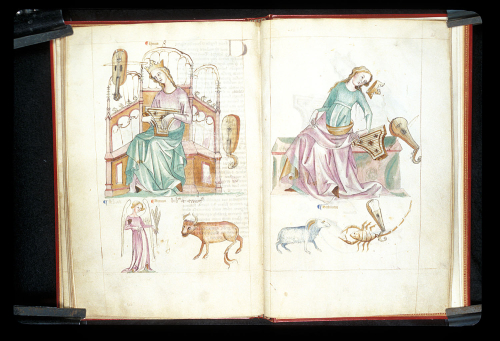 Venus playing a musical instrument with her ruling Zodiac signs, from a treatise on astrology by Albumazar, Netherlands, S., 2nd or 3rd quarter of the 14th century: Sloane MS 3983, f. 42v