Canon tables in the Lindisfarne Gospels now on display

As a text, the canon tables are ubiquitous and fundamental to Christian copies of scripture. Over many centuries copies of the Gospels in Latin, Greek, Coptic, Ethiopic, Armenian, Gothic, Syriac, Georgian or Slavonic begin with these tables. Devised and created in Greek by the early Church Father Eusebius (d. 340), bishop of Caesarea in Palestine, these tables formed a unifying gateway to the fundamental, but multiple narratives of the Evangelists Saints Matthew, Mark, Luke and John. As Eusebius explained in a prefatory letter to his friend Carpianus, he compiled the ten tables (or canons, in Greek) to help the reader ‘know where each of the Evangelists was led by the love of truth to speak about the same things’.

Canon 1 lists passages common to all four Gospels, Canons 2-9 different combinations of two or three Gospels and Canon 10 those passages found only in one Gospel. Building on a system of dividing up the text of the Gospels into verses that he attributed to Ammonius of Alexandria, Eusebius assigned consecutive numbers to sections in each Gospel and used these numbers within his tables to correlate related passages. By this means he adduced the unity of the four narratives without attempting to harmonise them into a single text. 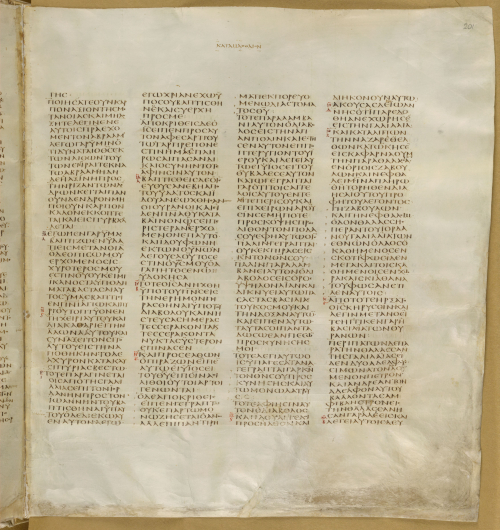 The earliest known evidence for the use of the tables occurs in Codex Sinaiticus, an extraordinary 4th-century Greek manuscript that is also the earliest surviving complete New Testament. In Codex Sinaiticus the tables themselves do not survive, but the Ammonian section numbers are included throughout the Gospels. These can be seen in the Gospel of St Matthew currently on display in the British Library’s Sir John Ritblat Treasures Gallery, or viewed in detail on our Digitised Manuscripts website. In Codex Sinaiticus, the section numbers (in Greek characters) are added on the left-hand side of each column in red ink, with the number of the canon table that needs to be consulted for parallel texts of that section.

For example, in the right-hand page on display in the Gallery, the third number in the second column (in the account of one of Christ’s temptations) is marked as section 16, in Canon 5. Further information about the manuscript is available on the Codex Sinaiticus website, including a full transcription and translation, and in this previous blogpost. 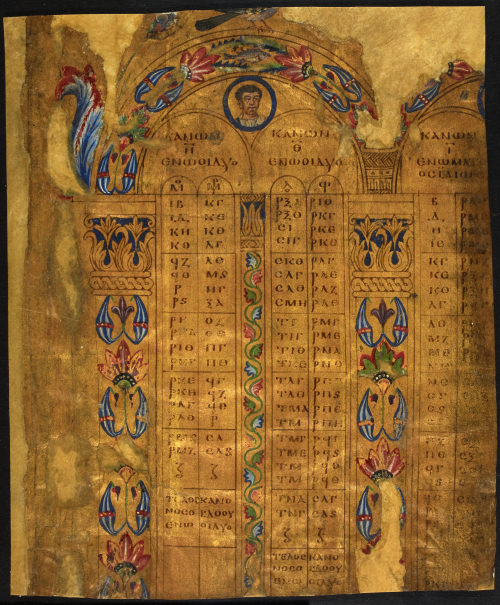 One of most splendid illuminated examples of the Canon Tables in Greek are the leaves now known as the Golden Canon Tables, because they are written on parchment previously painted entirely with gold. Made in Constantinople in the 6th or 7th century, the tables are now fragmentary but nevertheless betray a very sophisticated artistic style. They are a rare witness of an early version of these tables. 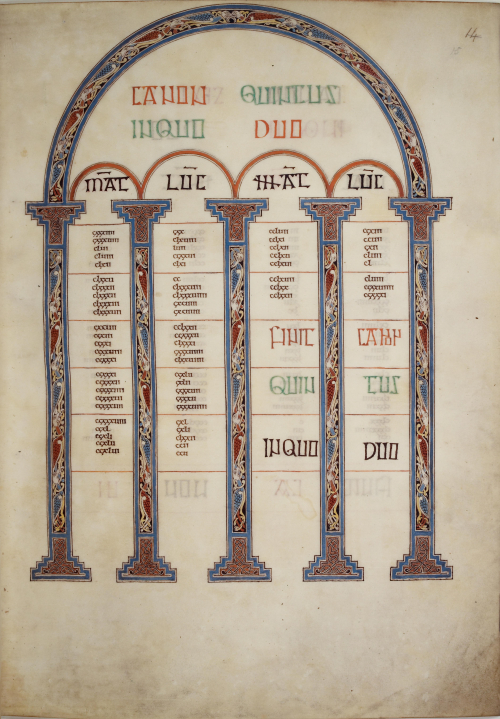 The pages of the Lindisfarne Gospels currently on display at the British Library: Cotton MS Nero D IV, ff. 14v–15r

Canon tables are also included in the Latin copy of the Gospels known as the Lindisfarne Gospels, which was probably made on the island of Lindisfarne in Northumbria in around 700. The fifth canon, which lists texts that are common in the two Gospels of St Matthew and St Luke, is now on display in the British Library's Treasures Gallery. This is the same canon as that referred to in Codex Sinaiticus, several centuries earlier. The canons in the Lindisfarne Gospels are surrounded by intricately designed micro-architectural decoration, with wonderful intertwined biting birds. You can view them in more detail with the zoom function on the Digitised Manuscripts website, or visit the Treasures Gallery in the coming months.