Bushy hair, writing furiously — why, it must be Hermione! But this is not an early image of Hermione Granger. This is the Hermione of Greek mythology. She features in Greek and Latin writings about the Trojan War, from Homer’s Odyssey to the plays of Euripides and the poems of Ovid. 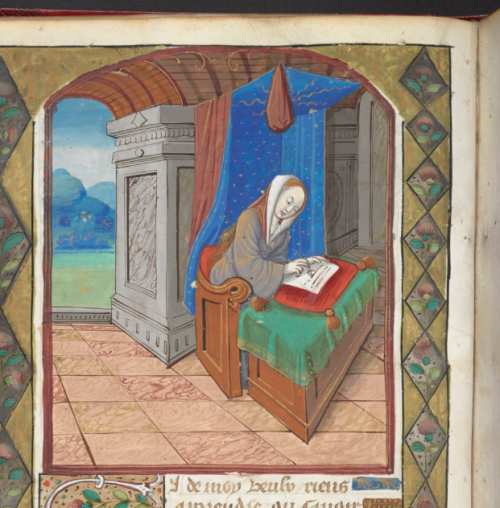 Hermione writing a letter, from a copy of a French translation of Ovid’s Heroides, made in Paris at the end of the 15th century: Harley MS 4867, f. 60v

In classical mythology, Hermione was said to be the daughter and only child of Helen of Troy and Menelaus, king of Sparta. She was only a young girl when her mother ran off with (or was kidnapped by) Paris, starting the Trojan War. Hermione’s love life became just as complicated as her mother’s. She was initially engaged to Orestes, the son of Agamemnon. In some versions of the story she even secretly married him. However, Hermione’s oblivious father married her to Achilles’s son, Neoptolemus, also known as Pyrrhus. This wedding is one of the first events in Homer’s Odyssey. Odysseus’s son Telemachus travels to Sparta to ask Menelaus if he has heard any news about the missing Odysseus and

found [Menelaus] in his own house, feasting with his many clansmen in honour of the wedding of his son, and also of his daughter, whom he was marrying to the son of that valiant warrior Achilles … [Menelaus’s] son, Megapenthes, was born to him of a bondwoman, for heaven vouchsafed Helen no more children after she had borne Hermione, who was fair as golden Venus herself (translated by Samuel Butler). 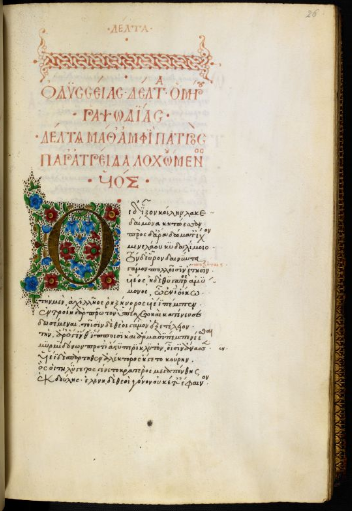 There is magic in some of the stories about the mythological Hermione. After the sack of Troy, Hermione’s husband Neoptolemus/Pyrrhus was given Andromache, the widow of Hector, as a concubine. In Euripides’s play Andromache, Hermione accuses Andromache of putting a spell on her so she is unable to bear children. She tries to persuade her father, Menelaus, to kill Andromache and her child while her husband is away, but Andromache is protected by Neoptolemus's grandfather, Peleus.

Meanwhile, Hermione's ex-fiancé Orestes arrives. He has killed Neoptolemus. Orestes declares that he is still in love with Hermione and takes her back to his kingdom. The love of Orestes and Hermione also inspired the Roman writer Ovid. She is one of the heroines of Ovid’s poems known as the Heroides. These 15 poems take the form of letters written by mythological heroines to the men in their lives who have let them down. Ovid portrayed Hermione as a woman who, against her will, had been dragged off by Neoptolemus/Pyrrhus. She writes to Orestes, begging him to come and rescue her.

prisoner here, contrary to the laws of both gods and men ...

Deafer to [my pleas] than the sea, he dragged me into his palace,

as I tore my hair in grief and shouted your name …

When the Greeks won the war and set wealthy Troy on fire,

they didn’t maltreat Andromache as badly as this ...

Follow my father’s example of claiming back an abducted wife …

[But] don’t muster a thousand ships with swelling sails

Or an army of Greek warriors — come yourself!’

The sense of these verses is similar in the later medieval French translation, see in the first image in this post. This translation was made by Octavien de Saint-Gelais for King Charles VIII between 1490 and 1493. 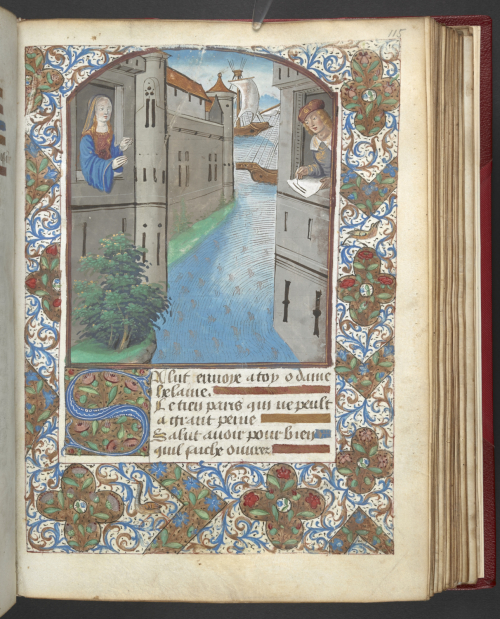 Paris and Helen writing to each other, from a copy of a French translation of Ovid’s Heroides, made in Paris at the end of the 15th century: Harley MS 4867, f. 115r

In Ovid’s poem, Hermione then wonders whether the women in her family have been struck with a curse ‘that makes all us female descendants of Tantalus ripe for the ravishing’, citing the examples of her mother Helen and her grandmother Leda. Ovid’s Hermione is not entirely sympathetic to her mother, however. Part-way through the letter, Hermione addresses her mother directly, allowing Ovid to give a haunting, child’s eye-view of the start of the Trojan War:

‘I tore my girlishly short hair and kept on shouting:

“Are you going away without me, mother?” …

I went to meet you when you came home, and — honestly —

I didn’t know what my mother’s face looked like.

I realized you were Helen because you were so beautiful.’

Hermione was a fascinating character who continued to inspire writers, musicians and artists in the Middle Ages and beyond, as Greek and Latin texts were recopied, rewritten and reintepreted. The manuscripts featured here are only a small sample of the books that feature the original Hermione.