A calendar page for December 2017

Happy last month of 2017, dear readers! It’s hard to believe the year is nearly over — and we’re a bit sad to be leaving behind the fabulous characters in the calendar of Add MS 36684! As always, if you’d like to know more about the whole manuscript, see January’s post, and for more on medieval calendars, check out our calendar post from 2011. 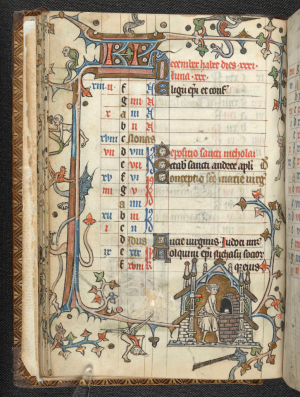 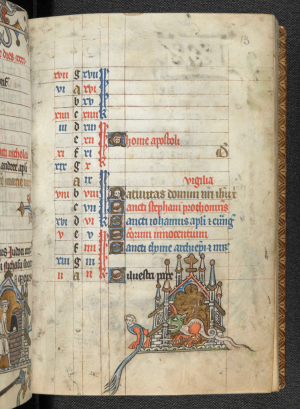 Our artist has pulled out all the stops for his last calendar pages. In addition to the fabulous birds and hybrid animals decorating the borders of the first folio, there are two fully nude men and one partially nude woman (our labour of the month — more on her in a minute). The nude man in the left margin (modesty protected by the bar border) is having his nose nibbled on by a small animal, whose body was sadly cut off when the manuscript’s leaves were cropped. A dragon roars angrily below, and farther below him — again cropped — is the backside of another nude figure. In the right margin stands another nude man, complete with doe-ears and antennae. The bas-de-page shows a woman’s head atop a long, orange neck extending from between two legs, which are topped with wings. 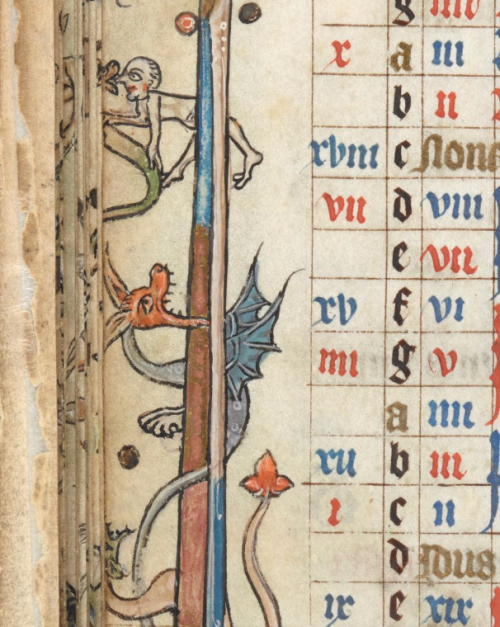 In the calendar entries themselves, you will notice two days outlined in gold ink. These can be considered one step up from the feast days (shown in red letters), as they are connected to the life of Christ and his mother, the Virgin Mary. On the first page, on 8 December, is the celebration of the Virgin Mary’s conception; and on the second page, as is expected on 25 December, is the birth of Christ.

December’s labour of the month is a partially nude woman baking bread in a brick oven. Baking and feasting are the traditional labours for the month of December; perhaps she has discarded some clothing because it’s hot in there! 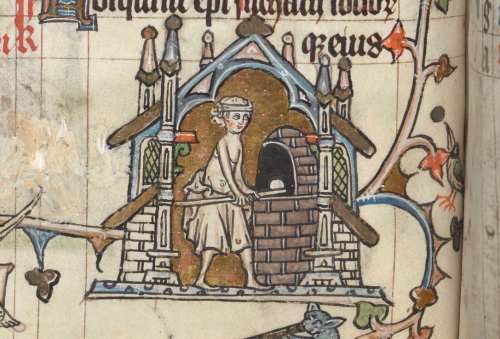 On the second page, we see the artist’s omission of the zodiac figure of Virgo, back in August, has left him without an established image to put in the niche. Having run through the rest of the zodiac figures a month early, either by choice or by mistake, he is left to make his own figure for December. Luckily for us, he presents a characteristically fantastic beast — green head, single orange horn, rose coloured body, and bright orange legs. For the first time in the calendar, there are not two heraldic hybrid figures on either side of the niche, but rather, a single creature with the head of a man and a long blue tail. 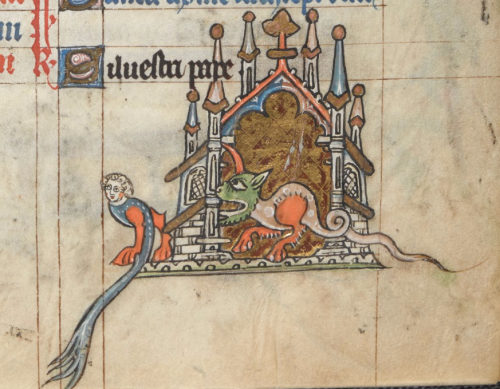 While our monthly discussion of Add MS 36684 is now at an end, remember you can go and look at the entire manuscript whenever you’d like on our Digitised Manuscripts site. Here’s to the end of a great year!