A medieval recipe for gingerbread

‘Tis the season to be merry, and what better way to celebrate than enjoy a festive treat of gingerbread. A medieval recipe for gingerbread features in a 15th-century English cookery book of extravagant banquets held at the British Library (Harley MS 279). Unlike our modern cake or biscuit-like version of gingerbread, the medieval recipe is more similar to confectionery in texture but experts agree that it will satisfy any sweet-tooth.

The opening of a medieval recipe for gingerbread, from Harley MS 279, f. 27v

tyd Bred, & make it so chargeaunt that it wol be y lechyd.

square, lyke as thou wolt leche yt. take when thou lechyst hyt

if thou wolt haue it Red coloure it with Saunderys y now.

The recipe calls for honey, saffron and powdered pepper to be mixed with grated bread. Cinnamon is then added before the gingerbread is shaped and cut into slices, and finally decorated with box leaves attached to cloves. If you wish to colour the gingerbread red, you may add saunders (sandlewood) as dye. 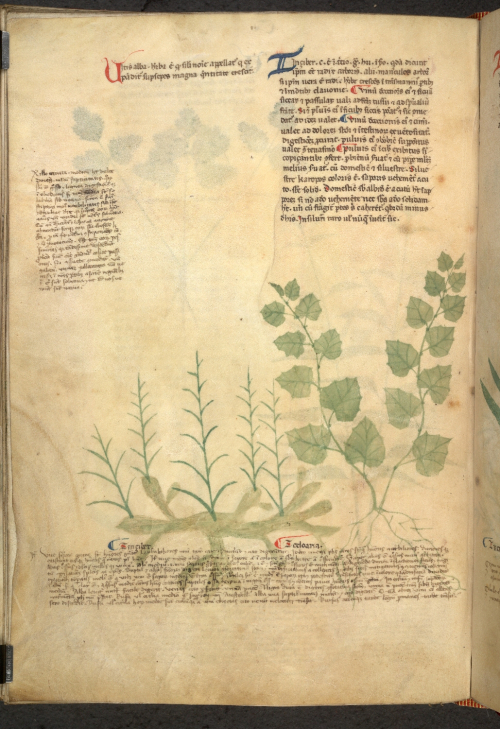 Miniature of a zinziber, or ginger plant (left) with a zedoary, or turmeric plant, from a medieval herbal, Egerton MS 747, f. 105v

Keen-eyed readers may have noticed that the recipe is missing one key ingredient – ginger! We can speculate that this ingredient may have been left out accidentally by the scribe, but we cannot know for sure. Ginger was a popular spice in more luxurious medieval culinary recipes, especially winter dishes. Along with cinnamon, nutmeg and pepper, ginger was believed to have heating properties, and it was thought to be able to warm the stomach and aid the digestive process. These spices are still found in modern Christmas dinner recipes, so medieval gingerbread will complement your holiday roast nicely. Miniature of a banquet with courtiers, servants, and dogs, from Harley MS 4372, f. 215v