A poem for literally all seasons

As followers of the @BLMedieval Twitter account know, some of us are fond of the hashtag #OTD. Short for ‘On this day’, it is used to recall which historical events took place on a given date. It’s a great excuse to highlight items from the British Library’s collections. In a way, it’s also rather medieval. When Benedictine monks assembled for their daily chapter meetings, they would have read an excerpt from a martyrology about which saints were commemorated that day and the next. Some medieval calendars included entries for every single day, and one of those is known as the Metrical Calendar of Hampson. 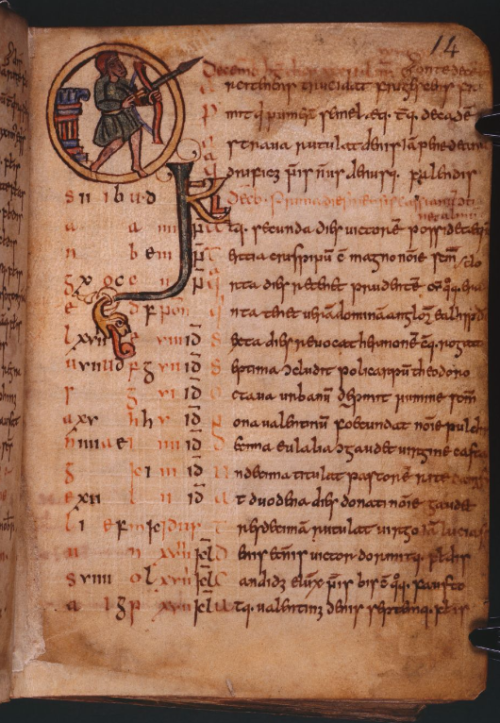 The entries for December, from the oldest copy of the Metrical Calendar of Hampson, Winchester?, 1st quarter of the 10th century, Cotton MS Galba A XVIII, f. 14r

The metrical calendar of Hampson survives in four manuscripts, all made in England in the 10th or 11th century (and three of which are held at the British Library). It takes its name from R.T. Hampson, its 19th-century editor. The calendar comprises 365 verses, one for each day of the year. To take account of leap years, medieval calendars added a second 24 February, instead of adding an extra day at the end of the month, known as 29 February.

The oldest surviving copy was made in England in the first decades of the 10th century. It was added to a 9th-century Psalter from the region that is now France (Cotton Galba A XVIII). The poem mostly lists saints commemorated on each day, but it also includes information about the movement of the moon and planets and some versions note the deaths of King Alfred and his queen, Ealhswith. The poet(s) sometimes had to stretch to fill some days. For example, the entry for 28 February roughly translates as, ‘This is the last day of February.’ In other instances, however, the poet(s) used vivid, memorable imagery. The feast of the Assumption of the Virgin on 15 August was described as the day the Virgin Mary ‘crossed over to the stars.’ Meanwhile, 29 August was listed as the day John the Baptist’s ‘neck was truncated with a sharp sword’. 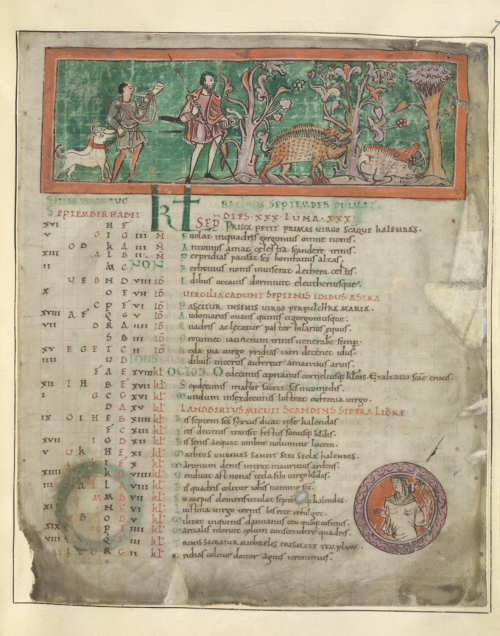 The entries for September, from a calendar, 11th century, Cotton MS Tiberius B V/1, f. 7r

There are two more versions from the first half of the 11th century, both associated with Canterbury or another major scriptorium: Cotton MS Julius A VI and Cotton MS Tiberius B V/1. Cotton MS Julius A VI contains a series of scientific diagrams and tables, now bound with a hymnal made a decade or two later. Cotton MS Tiberius B V/1 includes a range of texts on astronomy, geography and chronology, and includes an early world map. The fourth, abbreviated copy of the metrical calendar is found in an early 10th-century Psalter (Oxford, Bodleian Library, MS Junius 27). 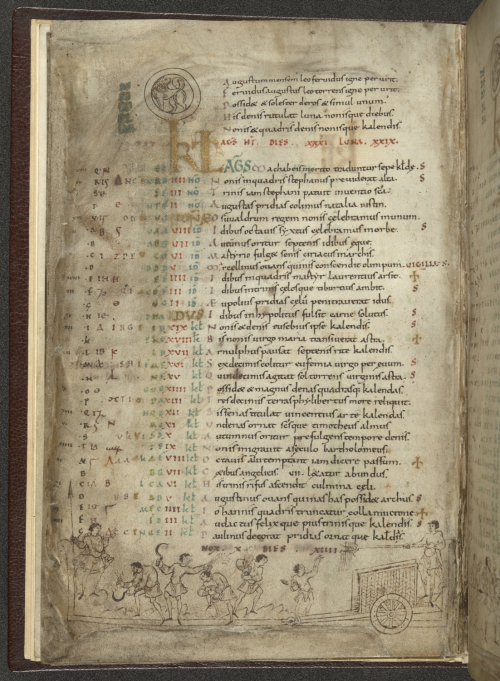 The entries for August, including the feasts of the Assumption and the Decollation of John the Baptist, from a calendar, Canterbury?, 11th century, Cotton MS Julius A VI, f. 6v

The origin of this poem is debated. It includes many Irish and northern French or Flemish saints, leading some to claim that it was composed by an Irish or continental scholar working in England. There were certainly plenty of candidates: the inhabitants of several northern French churches fled to England following viking raids in the late 9th and early 10th century, while many Irish and continental scholars stayed at the West Saxon court. Alternatively, the surviving poem may have been based on calendars composed elsewhere but modified by someone working in England.

The date when the earliest surviving version of the poem was compiled is slightly easier to narrow down. The oldest copy was made after Alfred's wife, Ealhswith, died in 902, since it mentions her death in the verse for 5 December: ‘The fifth [day] has dear Ealhswith, true lady of the English’.

However, there could have been earlier versions of the poem. The references to Ealhswith and Alfred could have been added later and, indeed, one of the later calendars (Cotton MS Julius A VI) omits them. Instead of Ealhswith, the entry for 5 December in that calendar commemorates ‘dear Candida, true lady of the Franks’.

The precise origins of the poem remains a mystery. However, the surviving copies show that the calendar continued to be read and copied for well over a century. It’s easy to see the appeal of a calendar with a verse for literally every occasion. Even to this day, we are fascinated by events which happened #OTD. At least we don’t have to write our tweets in verse!

Why haven't I found this blog before? Thank you so much for sharing! You just gained a new follower! Together, with many others around the world, we'll keep medieval history alive!