Two British Library manuscripts are featured in the exhibition, Le Verre, un Moyen Âge inventif (‘Glass, the Inventive Middle Ages’), at the Musée de Cluny in Paris, which opened on 20 September and runs until 8 January 2018. A collection of miniatures from a treatise on the Vices and Virtues and a 13th-century copy of Roger Bacon’s Opus Maius are two of nearly 150 objects that include glassware, illuminated manuscripts, engravings and paintings as part of an examination of the use of glass throughout the Middle Ages. 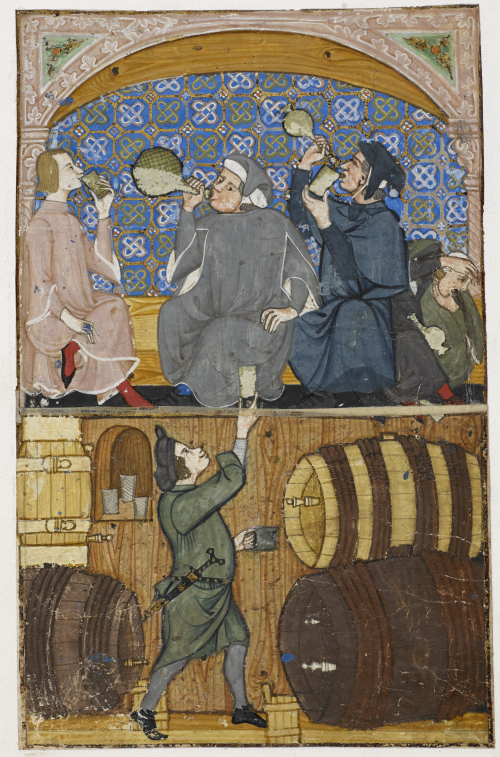 Miniature of a tavern scene with men drinking illustrating Gluttony, and below a cellarer passing up a drink, from a treatise on the Vices and Virtues (fragment), Genoa, c. 1330–1340: Add MS 27695, f. 14r

The scene above is an image originally bound with a 14th-century treatise on the Seven Vices (now Add MS 27695) by a member of the Cocharelli family of Genoa. Possibly used to instruct the children of the family on the seven deadly sins, the painting depicts four men representing Gluttony as they drink in an Italian tavern. The scene also features a variety of glassware: the moderate drinker on the left sips from a glass, the excessive drinkers beside him both drink from bottles and glass, and the drinker on the right has dropped his bottle as he vomits. The cellarer below is passing the drinkers a refilled glass, and his additional glasses are visible on a shelf beside him.

During the 14th century, northern Italy was a leading centre in the production of glass for domestic and scientific use. Venetian glassmakers specialised in making high quality, colourless glassware made from quartz pebbles from the Italian mainland and plant ash from Egypt and Syria. By the Renaissance, the glass industry of Venice was booming with spectacular glassware used to celebrate special occasions across Europe. As prized status symbols in events such as the marriage ceremonies of noblemen and women, Venetian glassware featured opulent glass imitating semiprecious stones, gilding and enamelling. 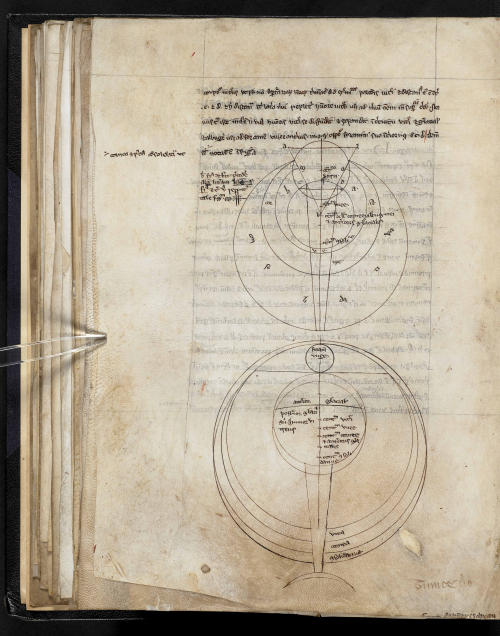 As well as domestic glass, medieval glass was used to create scientific apparatuses and invent life-changing tools. The 13th-century English friar and scholar Roger Bacon produced major works on natural philosophy and mathematics, including the Opus Maius, which he sent to the Pope in 1267 or 1268. In this treatise of over 800 pages, Bacon examined topics ranging from celestial bodies to gunpowder. The British Library holds what is thought to be the earliest manuscript copy of several of Bacon’s works (now Royal MS 7 F VIII). This copy features the text of Bacon’s work on optics known as the Perspectiva, in which he describes the properties of light, colour and vision. His study of mirrors and lenses greatly influenced the scientific community, leading to the invention of reading glasses and magnifying glasses. In 1289, the Florentine writer Sandro di Popozo commented in a treatise on the conduct of family that, ‘I am so debilitated by age that without the glasses known as spectacles, I would no longer be able to read and write.’ 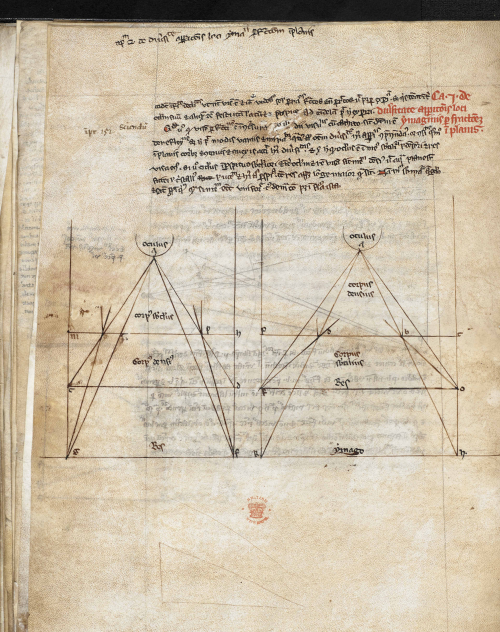