Chronicles and cartularies – fact and fiction

Regular readers of this Blog will know that we are constantly adding more manuscripts to our Digitised Manuscripts site. Many of these medieval books have been digitised as part of a major project sponsored by The Polonsky Foundation, in collaboration with our friends at the Bibliothèque nationale de France. Here are three examples of newly-digitised British Library manuscripts containing chronicles and cartularies. All three have a connection to France and/or contain texts written in French.

Additional MS 11662 contains an illustrated verse chronicle of the priory of Saint-Martin-des-Champs, produced in Paris between 1072 and 1079, shortly after the events described took place. The priory was founded by King Henry I in the mid-11th century, on or near the site of a Merovingian church just outside Paris, dedicated to St Martin, the Roman soldier who gave his cloak to a poor beggar.

Narrative illustrations in chronicles are rare in the Romanesque period, and these are unique early examples of the scenes represented. The text includes a copy of the foundation charter by Henry I, dated 1059–1060, and Philip I's confirmation of the donation of Janville and Neuvy-en-Beauce to Saint-Martin-des-Champs (1065). A page is missing after f. 4, but a complete copy of the text with its illuminations was made in Paris c. 1245 (now BnF, nouv. acq. lat. 1359). 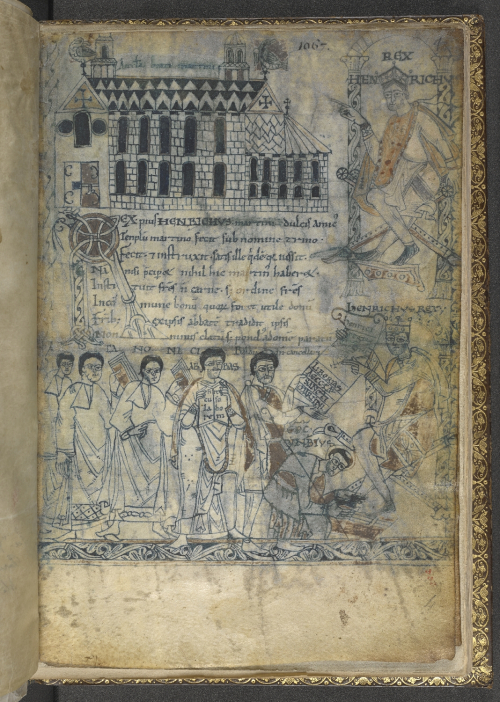 Philip I of France on his throne, surrounded by his court, giving the charter to the canons. Members of the court are named and the churches of Saint-Martin-des-Champs and Saint-Samson of Orléans are illustrated to his left: Add MS 11662, f. 5v

The chronicle is followed by a modern transcription of the text with one of the images (f. 13r) and an index added by an earlier owner. Baron de Joursanvault (1748–1792), whose arms are found on f. 10r. 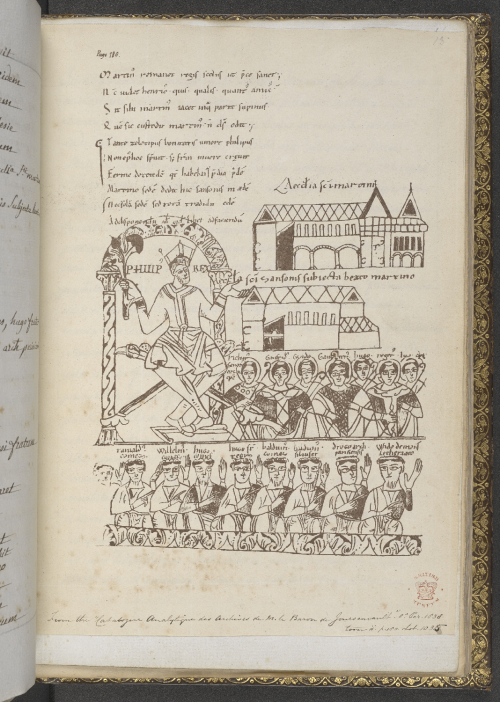 The next two manuscripts are associated with St Augustine's Abbey, Canterbury, founded by Archbishop Augustine (r. 597–604) in the early 7th century. The church, originally known as SS Peter and Paul, was re-founded by King Æthelberht (r. 860–866) to house ‘the bodies of Augustine himself and all the bishops of Canterbury and the kings of Kent’ (Bede, Historia Anglorum, I.33). In the 11th century, the possessions of the convent of Minster-in-Thanet, founded by St Mildreth in the 690s, were acquired by the abbey along with her relics, allegedly donated by King Cnut (r. 1016–1035).

Lives of the Canterbury saints 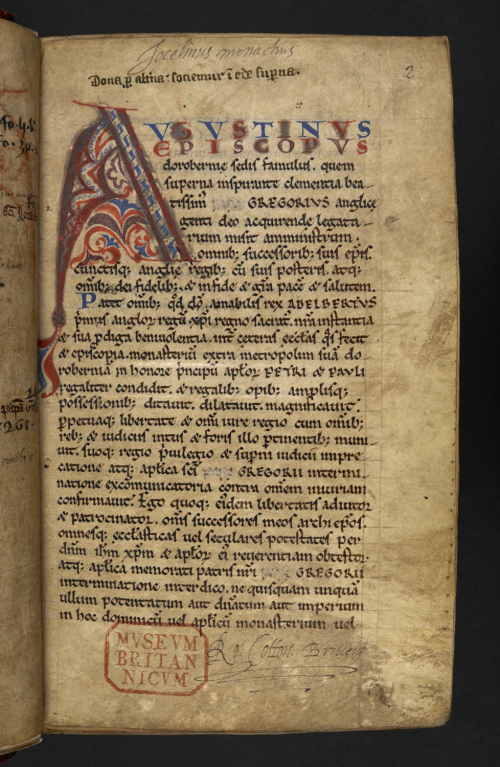 The opening page with a charter granting privileges to St Augustine’s Abbey. The name of its former owner, Sir Robert Cotton’s, is inscribed at the bottom: Cotton MS Vespasian B XX, f. 2r

Much of this volume, copied in the 12th century, consists of hagiographical works by Goscelin, a monk of the abbey of Saint-Bertin in Saint-Omer, northern France, who came to England in the 11th century and who visited many monasteries, collecting material on English saints. The manuscript contains Goscelin's writings on the miracles and translation of St Augustine, as well as a Life of St Mildreth and other texts relating to the early archbishops of Canterbury. On f. 25r, an otherwise blank page, are notes in very faint pencil, written in Old French, probably dating to the 14th century. 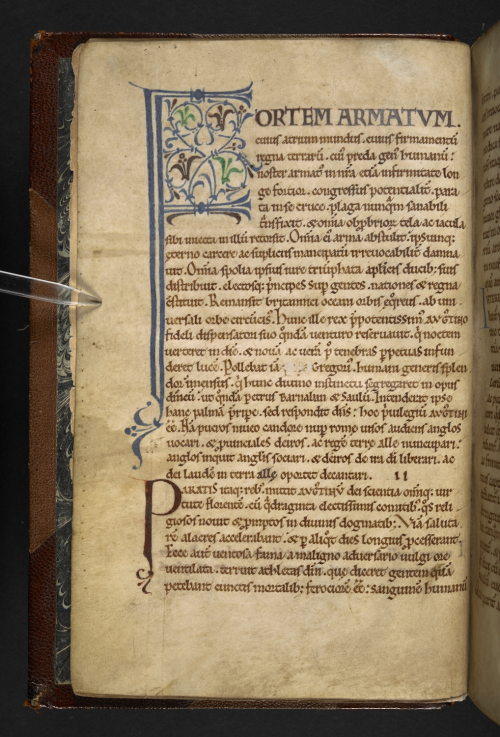 Monastic institutions in the Middle Ages often manufactured documents granting themselves land and privileges. A series of spurious charters and papal privileges follows Goscelin's works in this collection, including a charter of King Edward the Confessor written in a 15th-century hand (ff. 276r–v) and two charters of King Æthelberht I of Kent in Anglo-Caroline script (ff. 277r–279r). 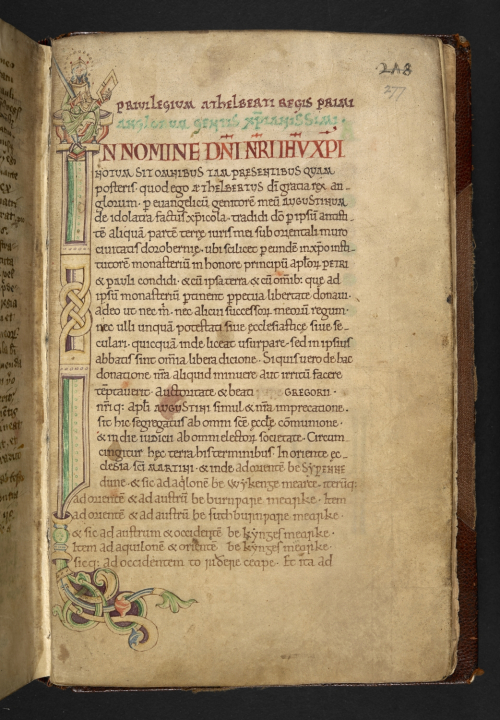 A full-page historiated initial 'I' depicting King Æthelberht I of Kent, holding a scroll in his right hand and a document in his left: Cotton MS Vespasian B XX, f. 277r

A cartulary of St  Augustine’s, Canterbury

A fragmentary 12th-century cartulary owned by St Augustine's Abbey, Canterbury, is the first item in this composite manuscript, comprising five booklets bound together in the early modern period (Harley MS 337). The Canterbury cartulary contains various papal and imperial privileges, including the confirmation of a privilege granted by Pope Innocent III and correspondence between Calixtus II (r. 1119–1124) and Henry V (r. 1111–1125), the Holy Roman Emperor, relating to the investiture controversy. 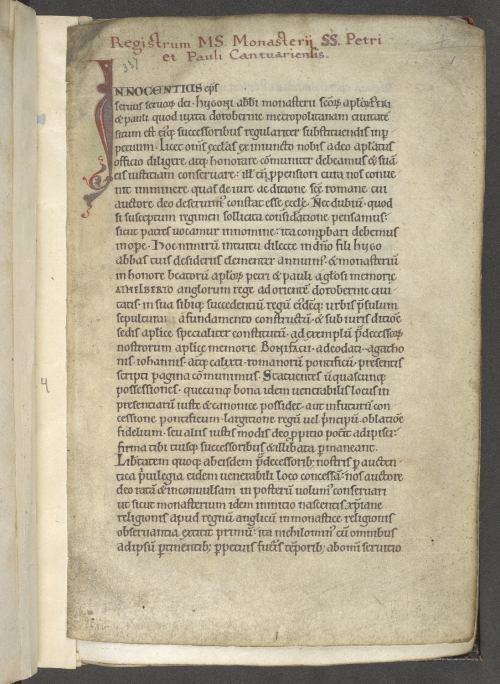 A decorated initial at the beginning of the cartulary: Harley MS 337, f. 1r

Also bound with these earlier works is ‘the Harleian Roll’, so-named because it contains a series of shields, painted around 1314, decorating a work in Anglo-Norman French by William of Waddington, the Manuel de Pechiez. A total of 126 armorial shields in colours are found in the upper margins and the outlines of unfinished shields are sketched in brown ink on the remaining pages. 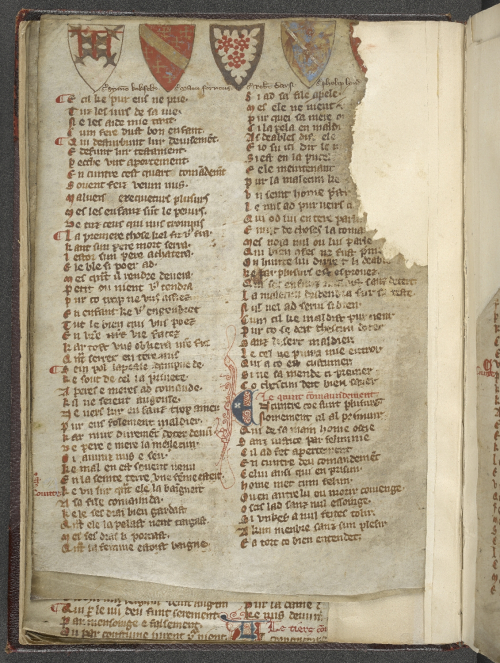 A fragment from the Manuel des Pechiez, with armorial shields including that of Sir Giles of Argentein, killed at Bannockburn in 1314: Harley MS 337, f. 15v