Digging for inscriptions in medieval manuscripts

Inscriptions are one of the key sources for understanding premodern history. Monuments carved in stone could outlast even the most carefully preserved papyri, and there are thousands of people in ancient times that go completely undocumented save for a single inscribed memorial. But monuments were subject to the elements, destroyed, and reused as building materials. We can look for evidence of lost inscriptions in medieval and early modern manuscripts. 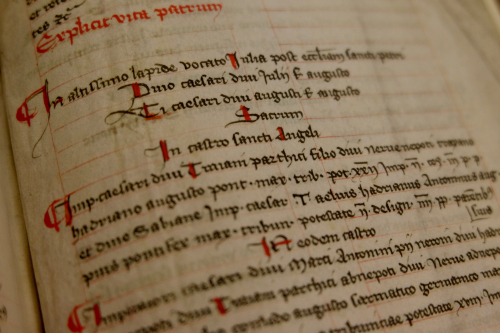 Interest in inscriptions never completely died away during the Middle Ages. The Carolingians preserved some of the most important collections of inscriptions, such as that in Einsiedeln, Stiftsbibliothek, Codex 326(1076). Within the field of epigraphy (the study of inscriptions), these are called a ‘sylloge’. Such collections might be found as part of a travelogue, or simply copied as a note with an unrelated text. British Library Harley MS 3685, ff. 3r–5v, includes an important witness of the inscriptions Pope Damasus designed for the new Roman catacombs of the martyrs, now destroyed. Add MS 34758 was made at the monastery of St Andrew in Rome in the late 14th or early 15th century: after a copy of the Lives of the Desert Fathers comes two pages of inscriptions from Rome relating to its emperors (f. 311r–v). This text was copied in the same hand as what precedes it: either it was of interest to the original compiler, or it was copied along with the rest from an earlier manuscript. It shares some features with a well-known sylloge by Niccolò Signorili, suggesting a common source. 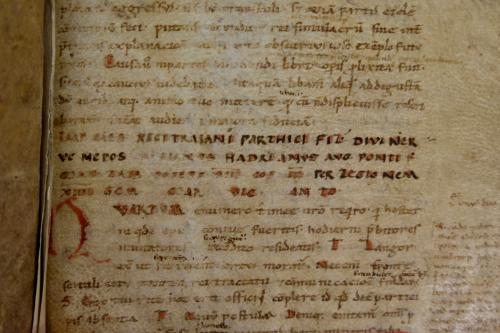 Other inscriptions end up in manuscripts almost by accident. In Royal MS 12 B XXII, a copy of Calcidius’s Latin translation of Plato’s Timaeus, an inscription from the time of the Emperor Hadrian, datable between 10 December 123 and 9 December 124, has been included at f. 2r. It was likely written into the margin of an earlier copy, and was copied along with the rest as if it were a rubric or heading. This inscription was not known from any other sources before a reader noticed it in the 20th century. 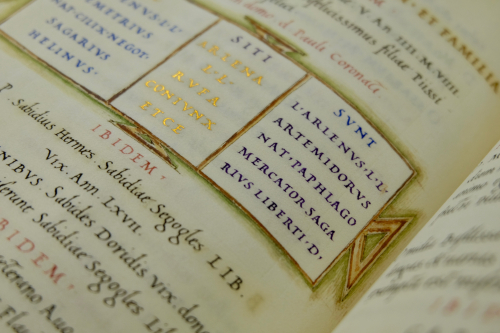 An inscription copied from the house of Paulus Coronatus in Rome: Stowe MS 1016, f. 119v

The most visually impressive example of manuscript epigraphy in the British Library is Stowe MS 1016, made by the scribe Bartolomeo Sanvito (1433–1511) some time after 1502. It includes a copy of a sylloge by his friend Fra Giovanni Giocondo, here in its third recension: he continued to revise the text as he saw new inscriptions. The results are stunning, even if some of the coloured monuments speak more of Renaissance than Classical tastes. 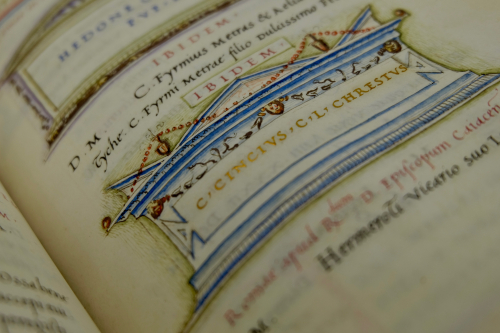 The use of manuscripts for finding evidence about inscriptions is best known for Roman epigraphy, but it continues to be applicable in the modern day. Many inscriptions of Aphrodisias are best preserved in the notebooks made by William Sherard in 1705–16 while he was British consul at Smyrna (Add MSS 10101–2), with fair copies in Harley MS 7509. Ancient monuments continue to be threatened by war, neglect and pollution. Such documents are a poignant reminder of the importance of preserving the past while there is still time.