Renaissance illumination at the Louvre

Two Renaissance manuscripts from the British Library collections are currently on loan to the Louvre in Paris, where they are displayed in an exhibition devoted to King François I of France (r. 1515–1547) as a collector of Netherlandish art. 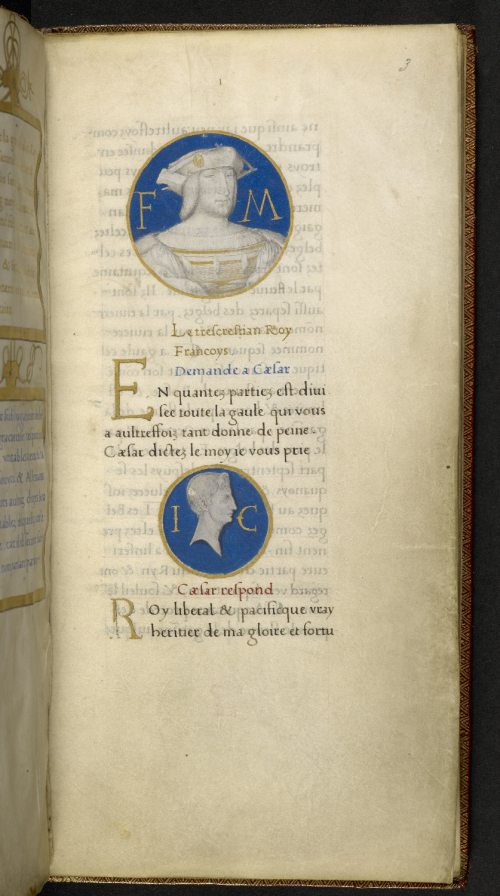 François I pictured in a medallion above Julius Caesar, with his initials FM, from Les Commentaires de la guerre gallique (Book I), Paris or Blois, 1519: Harley MS 6205, f. 3r

François I was a great patron of the arts, fostering the ideals of the Renaissance and humanism in France during his reign and sponsoring artists, musicians and craftsmen. He is well-known for his love for — and acquisition of — things Italian, but his extensive purchases of tapestries, objets d’art, paintings and miniatures show that his taste extended to artworks in the Netherlandish style, equally important at this period. Bringing together many of these objects, the Louvre's exhibition focuses on the influence of Netherlandish artists in France in the first half of the 16th century and the king's patronage. Lesser-known Netherlandish artists brought to the fore include Godefroy le Batave, Jean Clouet and Noël Bellemare, who worked in the ateliers that produced our two manuscript treasures on show in the exhibition.

The first is a manuscript that was made specifically for François by his former preceptor and almoner, the Franciscan friar, François Desmoulins de Rochefort (d. 1526). 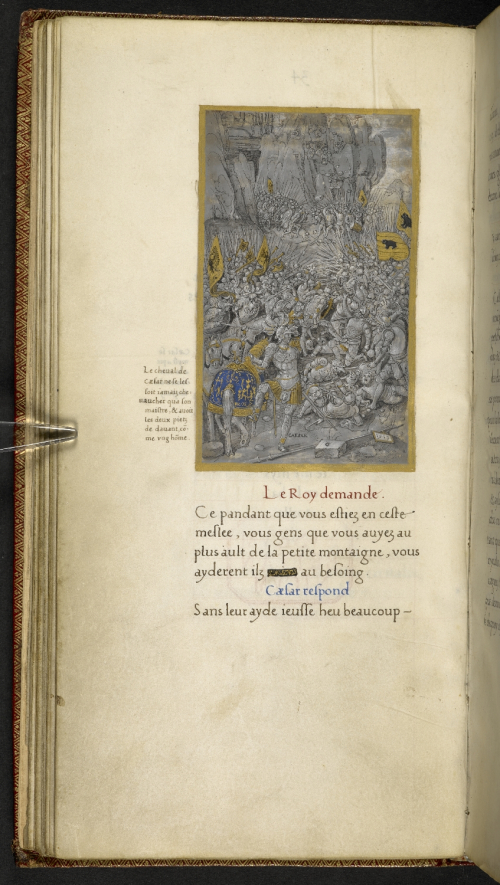 A miniature of Caesar and his horse in the midst of a battle, with the dialogue between him (in blue) and François (‘Le Roy’, in red) beneath, from Les Commentaires de la guerre gallique (Book I), Paris or Blois, 1519: Harley MS 6205, f. 36v

In a famous victory, François I defeated the Swiss pikemen at Marignan in 1515. This work draws parallels between the Swiss campaigns of the French king and those of Julius Caesar in his ‘Gallic wars’, taking the form of conversations between the two conquerors. 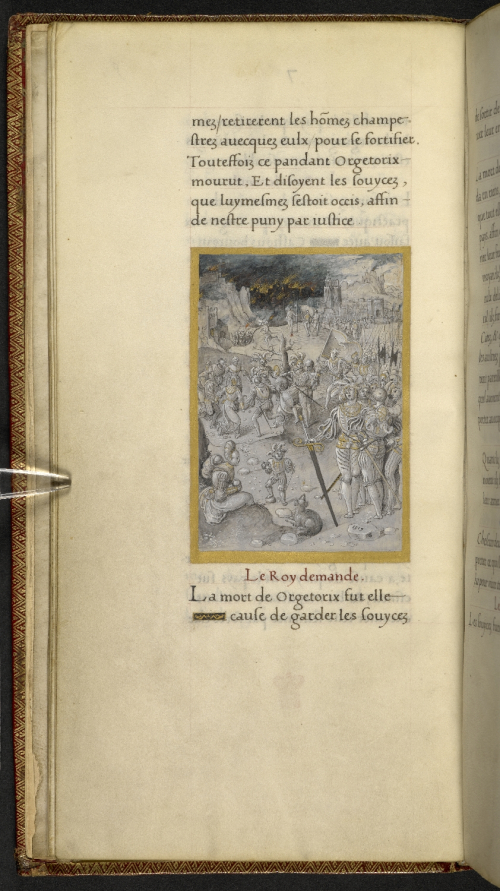 After the death of Maximilian I, the Holy Roman Emperor, in 1519, François I’s candidacy for this crown was strongly promoted by those around him. The Harley manuscript is the first of a series of three volumes made with this aim, perhaps commissioned by his mother, Louise of Savoie, for her ‘petit cesar’ from the author, François Desmoulins. The Dutch astronomer and theologian, Albert Pigghe (b. c. 1490, d. 1542), supervised the creation of the maps and may also have been the scribe. The other two volumes survive as Paris, Bibliotheque Nationale de France MS fr. 13429 and Chantilly, Musee Conde, MS 764/1139. The miniatures were painted by Godefroy de Batave, a Dutch artist trained in Antwerp who worked under his supervision. The portrait medallions on f. 3r and also those in the BnF volume have been attributed to Jean Clouet, who painted the famous portrait of François I that is also in the exhibition.

François I’s hopes of winning the crown of the Holy Roman Empire were dashed when his rival, Charles V, was elected emperor in 1519. Further humiliation followed with his defeat at the hands of Charles at the Battle of Pavia in 1525, and he went so far as to form an alliance with the Turkish emperor, the fearsome Suleiman the Magnificent. This image in a manuscript made thirty or more years later glorifies the supposed triumphs of Charles V over his enemies, including François and Suleiman. A portrait of François I from after his death (third from left) in a miniature of a scene from the Triumphs of Emperor Charles V: the Emperor enthroned among his enemies, including Suleiman the Magnificent and Pope Clement VII, c. 1556–c. 1575: Additional MS 33733, f. 5r

Book of Hours attributed to the Bellemare group 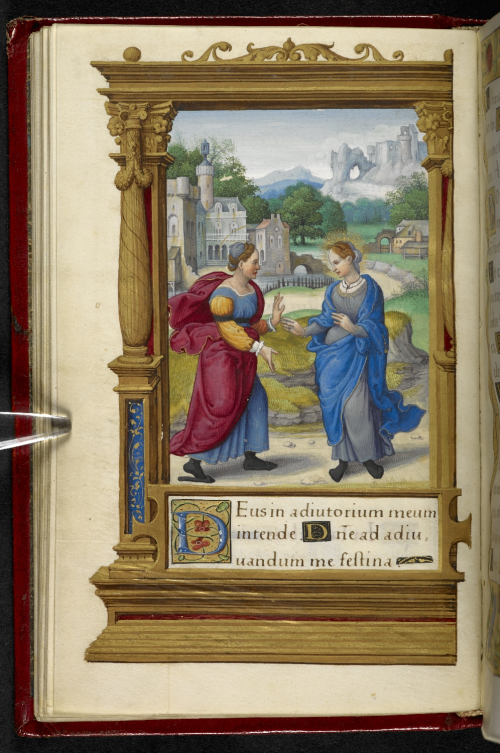 The second British Library manuscript on loan to the Louvre is an exquisite Book of Hours with fifteen full page miniatures, each embellished with a gold Italianate tabernacle frame. A group of illuminators who supplied decorated Books of Hours to the court of France at this time, known as the Bellemare Group after the artist Noël Bellemare, used a style reminiscent of the Antwerp Mannerists, characterised by brilliant, rather unnatural colours. Although this work is not directly associated with François I, it is a further example of the influence of Netherlandish style on the artworks produced within his court circles. 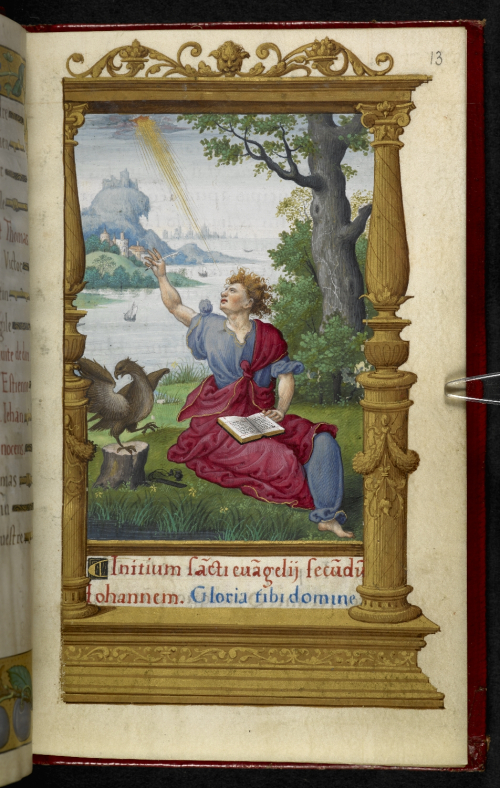 The British Library is delighted to be a lender to François Ier et l’Art des Pays-Bas, on at the Musee du Louvre until 15 January 2018.