You cannot be Sirius

Fans of a certain boy wizard will be familiar with Sirius Black, Harry Potter’s beloved godfather. In the Harry Potter books, Sirius Black was an Animagus, with the ability to turn into a shaggy-haired black dog. This is no coincidence, as his name was inspired by Sirius, the brightest star in the night sky, which lies in the constellation known as Canis major (The Greater Dog). The British Library's exhibition Harry Potter: A History of Magic explores the history, mythology and folklore behind the Harry Potter stories, and we are delighted that it features a wonderful 12th-century astronomical treatise (Cotton MS Tiberius C I), containing an elaborate illustration and description of the constellation Sirius. 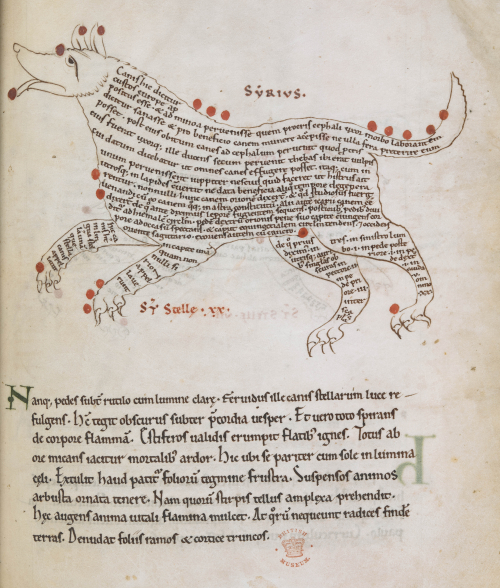 The constellation of Sirius the Dog Star, from Cotton MS Tiberius C I, f. 28r

This manuscript was produced at the Benedictine abbey of St Peter, St Paul and St Andrew in Peterborough, sometime in the early decades of the 12th century. The astronomical treatise it contains is known as the Aratea, being a Latin translation (by Marcus Tullius Cicero) of the Phaenomena by Aratus of Soli. The description of each constellation is accompanied by a pen-drawing of either human or animal figures, with red dots representing the stars. In this instance, the constellation Sirius takes the shape of a dog, with the words written in black ink.

The body of Sirius (and the other figures in this manuscript) is infilled with an account of the origins and history of each constellation. They comprise quotations from the Astronomica written by Hyginus, an astronomical source-book. Sirius, from the Greek seirios aster, meaning ‘scorching star’, was thought to have been named by the Egyptian goddess Isis, because the star shone more brightly than any other. The dog days of summer were so-called because the hottest days of the year traditionally coincided when the Dog Star ascended to rise before the Sun, from late July until August. 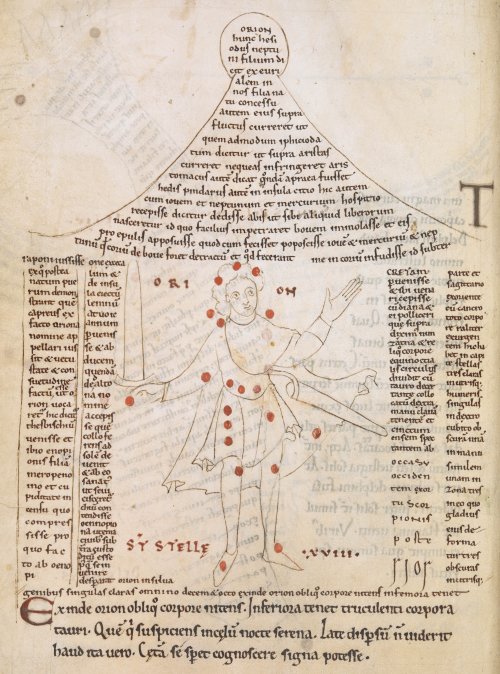 The constellation of Orion, from Cotton MS Tiberius C I, f. 27v

Sirius was also said to be the hunting dog of Orion. The constellation Orion is portrayed in the same manuscript as a man inside a house. According to the Astronomica of Hyginus, Orion was accidentally slain by the goddess Diana, as the result of a challenge that she could not hit him with one of her hunting arrows. To mourn his death, she placed him among the constellations. Bellatrix, meaning ‘female warrior’, is the third brightest star in the Orion constellation. Other figures in the night sky include the Hare, the Eagle, the Swan and the Centaur. The last-named was believed to be highly skilled in augury, that is, the interpretation of omens. 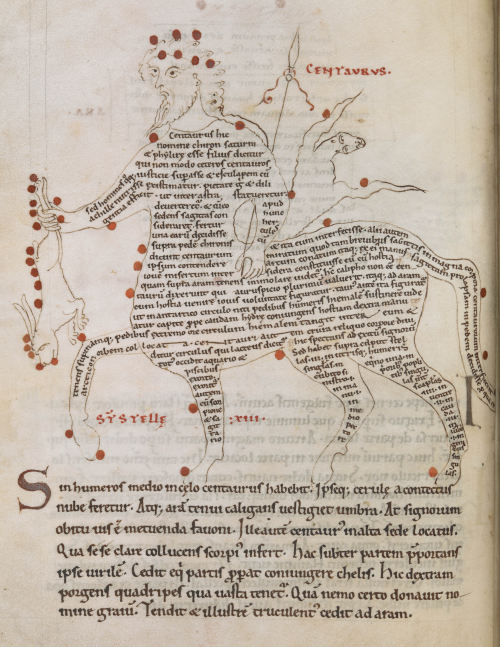 The centaur was highly skilled in the interpretation of omens: the Centaur constellation, from Cotton MS Tiberius C I, f. 31v

Would you like to stargaze more? This illustrated Aratea has been digitised by the Polonsky Foundation England and France, 700-1200 project. It is now available to view online on our Digitised Manuscripts site. Two other copies of the Aratea can also be seen in full there, one made in 9th-century France and later taken to Canterbury (Harley MS 647) and the other made at Fleury around the year 1000 (Harley MS 2506).

Meanwhile, the wonderful manuscript illustrated above is currently on display in the Astronomy section of the British Library’s major exhibition, Harry Potter: A History of Magic. Tickets can be purchased online, but they are selling extremely fast. The show has to end on 28 February, so catch it while you can.