For over one thousand years Constantinople (now Istanbul) was a byword for awe-inspiring splendour. Named after the Emperor Constantine the Great (r. 306–337), who transferred the capital of the Roman Empire there in 324, the city also became the Christian capital of the world.

The Golden Canon Tables (British Library Add MS 5111/1 [ff. 10–11]) are spectacular witnesses to the remarkable quality of painting undertaken in Constantinople to embellish Christian texts. For one modern authority, they are ‘perhaps the most precious fragments of any Early Christian manuscript’ (Kurt Weitzmann, Late Antique and Early Christian Book Illumination, p. 116). Now mere fragments, they both hint at what fine early manuscripts of the Bible we might have lost and caution against rash generalisations based merely on those that have survived. The Canon Tables are now available on our Digitised Manuscripts website to view in glorious detail with the zoom feature. 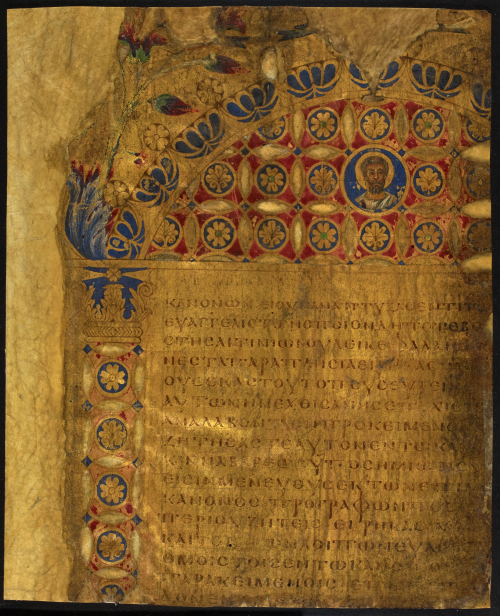 As we mentioned in a blogpost several weeks ago, as a text the canon tables are ubiquitous and fundamental to Christian copies of Scripture over many centuries. Of the two thousand or so manuscripts that each contains the Four Gospels in Greek (literally, the Tetraevangelion), the vast majority begin with these tables. Devised by the early Church Father Eusebius (d. 340), bishop of Caesarea in Palestine, these tables formed a unifying gateway to the fundamental but multiple narratives of the Evangelists Sts Matthew, Mark, Luke and John. Canon 1 lists passages common to all four Gospels, Canons 2–9 different combinations of two or three Gospels and Canon 10 those passages found only in one Gospel. Building on a system of dividing up the text of the Gospels into verses that he attributed to Ammonius of Alexandria, Eusebius assigned consecutive numbers to sections in each Gospel and used these numbers within his tables to correlate related passages. The present leaves are rare witnesses of an early revision of Eusebius’s tables.

The Golden Canon Tables are a chance survival. Separated from the text of the Four Gospels that they once prefaced, they were added to a Greek Gospels written sometime before 1189. As they survive, the tables comprise the end of Eusebius’s letter, part of Canon 1, all of Canons 8–9 and part of Canon 10. Originally each of the two leaves would have been around twice as large. Both letter and tables are written in an imposing majuscule, or upper case, script on parchment previously painted entirely with ‘shell’ gold, that is powdered gold suspended in a binding medium so-called because this pigment was often kept in a shell in the early Christian and medieval periods. 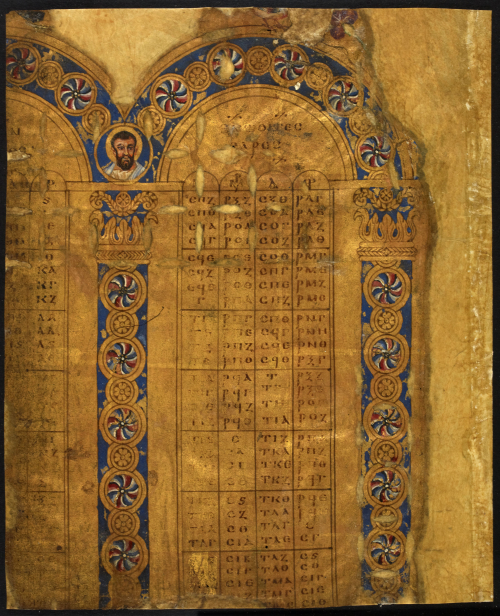 Each is framed by magnificently illuminated columns and arches that distinctively combine rigorous geometric and linear forms with remarkable naturalistic features. Carefully drawn outlines and regularly applied paint stress the surface qualities of the overall architectural scheme. Elsewhere lavish and energetic brushwork emulate three-dimensional, natural forms, including lushly growing flowers and colourful birds. The letter is enclosed by one wide arch that once extended to the full width of the page and the tables by two narrower arches on each page.

Within the tables each of the arches is inscribed at the top with the canon number and subdivided below into further smaller arches, each of which is headed by the abbreviated name of the relevant Evangelist. Below each of these smaller arches are the parallel lists of section numbers for each Gospel, written in Greek letters and in groups of four. 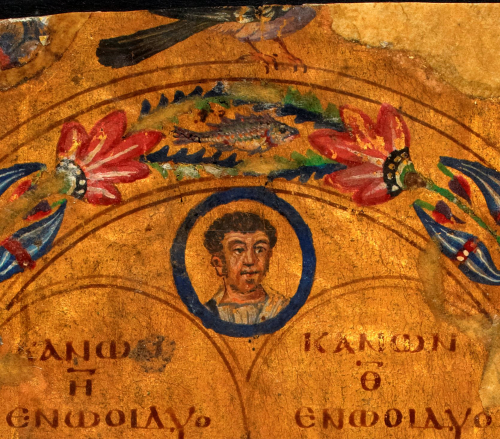 Within the surviving arches are four complete medallions with male bust portraits, three of which bear haloes. Each of these medallions emulates an ancient Roman form of portraiture known as the imago clipeata (shield portrait) which honoured the dead by a bust set within a round, shield-shaped form. The Christian symbol of the fish is included in the decorated arch directly above the bust portrait heading Canons 8 and 9. When complete the Golden Canon Tables probably contained twelve bust portraits. It has been argued that these memorialised the Apostles and were inspired by similar busts set in the arcades of the rotunda mausoleum of Constantine the Great located beside the Church of the Apostles at Constantinople.

For more information about Greek illuminated Gospels in general, including the Golden Canon Tables, please see our webspace dedicated to Greek manuscripts.

Byzantium: Treasures of Byzantine Art and Culture from British Collections, ed. by David Buckton (London, 1994), no. 68.