Lady Jane Grey is one of England's least fortunate monarchs. Aged just 15, she was catapulted to the throne in July 1553, in succession to her cousin, King Edward VI, in order to prevent the accession of Mary Tudor. Nine days later, she was deposed in favour of Mary, and taken into custody at the Tower of London. Within four months, she had been convicted of high treason; and on 12 February 1554, the erstwhile and never-crowned Queen Jane was beheaded on Tower Green.

On BBC Four this week will be broadcast a three-part documentary, England's Forgotten Queen: The Life and Death of Lady Jane Grey. Presented by Dr Helen Castor, the documentary was filmed in part at the British Library and features interviews with Dr Andrea Clarke (Lead Curator, Medieval and Early Modern Manuscripts). Among the manuscripts shown by Andrea to Helen Castor are the diary of Edward VI and Lady Jane Grey's very own prayerbook. 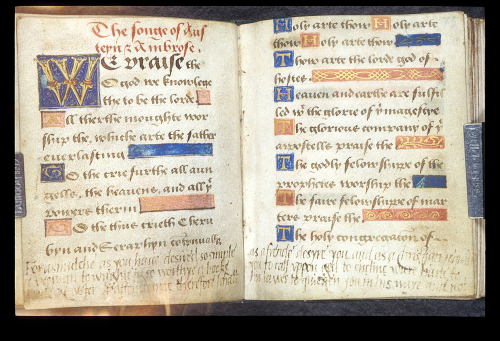 On this page of the manuscript, an inscription written by Lady Jane Grey to Sir John Bridges, Lieutenant of the Tower, reads, 'Forasmutche as you have desired so simple a woman to wrighte in so worthye a booke (good) mayster lieutenaunte therefore I shall as a frende desyre you and as a christian require you to call uppon god to encline youre harte to his lawes to quicken you in his waye and not to take the worde of trewthe utterlye oute of youre mouthe ...'

England's Forgotten Queen: The Life and Death of Lady Jane Grey will be shown on BBC Four at 9pm on Tuesday 9 January, Wednesday 10 January and Thursday 11 January. 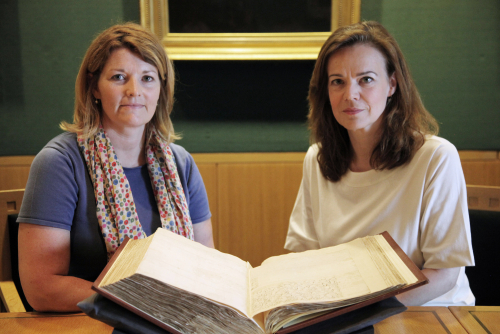 Andrea Clarke with Helen Castor at the British Library

A little horrified that a curator from the British Library pronounces the title Lieutenant in the American manner rather than in the British way.
Other than that , a fine example of excellent BBC History, as usual.

In the documentary, Jane was shown crossing herself. As a fervent Protestant, would she ever have made this gesture?