A calendar page for February 2018

It’s February: time to light candles and clear away some vines, according to the ‘Julius Work Calendar', an 11th-century calendar made in southern England.

The main illustration associated with February in both this and a related 11th-century calendar (Cotton MS Tiberius B V/1) involves workers clearing away vines. Above, their tools are depicted in detail and may reflect actual 11th-century agricultural practices. The men wield curved knives. Below, the man on the furthest left holds a bigger, curved blade attached to a longer handle.

The curling vines are reminiscent of the artistic flourishes that late 10th- and 11th-century English artists used to adorn their initials and borders. 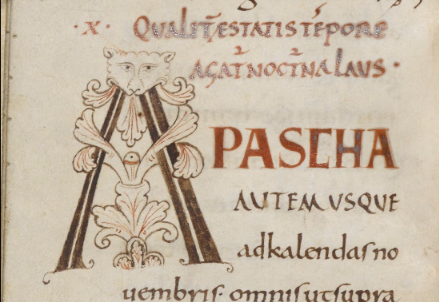 It is not clear why the two calendars are so similar. Some people have suggested that they were made at the same scriptorium, and that one might be a copy of the other. However, the poem that accompanies the calendar is slightly different in the two manuscripts, so the text does not seem to have been copied directly from one manuscript into the other. For example, the Julius calendar does not mention the death of Alfred the Great (d. 26 October 899) and his wife Ealhswith (d. 5 December 902), unlike the Tiberius calendar. Alternatively, both calendars could have been based on related exemplars which are now lost.

The zodiac sign associated with this month is Aquarius, based on the constellation that is said to look like a water carrier. Below, Aquarius is depicted standing on one foot, supported by a staff. He pours out a jug of water. The artist has cleverly posed him so his arm curves around a flaw in the parchment. However, these details are a little difficult to discern, because this manuscript was damaged in the Cotton fire of 1731. In particular, the heat warped the image as the edges of the parchment shrunk. 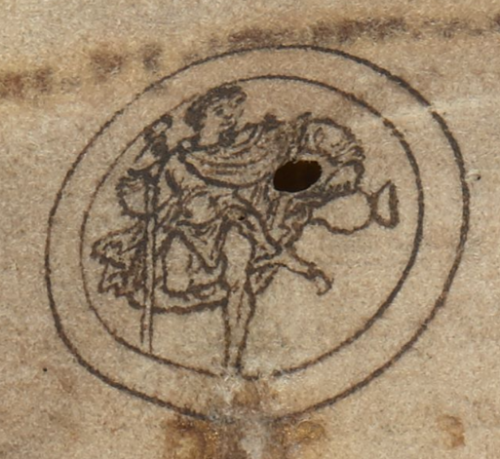 One early user of this calendar has put gold crosses next to two feast days in February. The first cross appears next to the feast for Candlemas on 2 February. This feast commemorated the Virgin Mary’s ritual purification after giving birth and Christ’s presentation in the temple. This manuscript was probably produced and owned at a reformed monastery or cathedral, where Candlemas was the subject of an elaborate liturgy. The ceremony involved a procession with candles that were blessed. This was followed by a service where monks continued to hold their candles, at least for the opening section (according to the Regularis Concordia: see Cotton MS Tiberius A III, f. 14r).

The second verse marked out with a gold cross is actually in incorrect Latin. The scribe has replaced the name of St Matthias (Mathiano) with the word for middle (mediano), or possibly ‘Methano’. He may have misread his exemplar. The red text next to the gold cross reads ‘sol in Pisces’. It is one of a series of notes about the sun’s position and other astronomical and astrological patterns that were noted in red in the margin of this calendar.

St Matthias’s feast day is not the only place where this scribe made a mistake. Another is above, in a verse about St Valentine, whose martyrdom is commemorated on 14 February. Instead of writing ‘Rite…’ (‘Solemnly/customarily…’), the scribe has written ‘Ride…’ (‘Laugh!’ ). It is tempting to wonder whether the scribe misheard or misremembered the verse, since ‘t’ and ‘d’ can sound similar, but ‘-te’ and ‘-de’ do not look similar in this script. For more on this manuscript (and details about when you will be able to see it in person), please see our calendar post for January 2018. For previous years’ calendar pages, and an explanation of medieval calendars, read our blogpost 'A Calendar page for January'.

twould be ever so appreciated if occasionally the text or bits of it translated - ie the verbiage above the image. I doubt all your followers read Latin or OE!
This is also a very dense calendar page - every day has a chunky line of script - ??
Also - it's February - workers are pretty scantily clad - meaning climare mild? I believe Feb standard images changed - but when? Mini ice age started...hmm, later. Thinking of the much COLDER images for Feb from later calendars ca mid late14 to 15 C.