We know that this blog is usually devoted to medieval manuscripts, but we couldn't help featuring this image of a garden gnome. The little chap in question (in actual fact, he's rather large) is currently standing proudly in the British Library's Harry Potter: A History of Magic exhibition. We have borrowed him from our friends at the Garden Museum here in London, and as with our other lenders (among them the British Museum, the Science Museum and the Museum of Witchcraft and Magic) we are indebted to their generosity in allowing him to be part of our show. 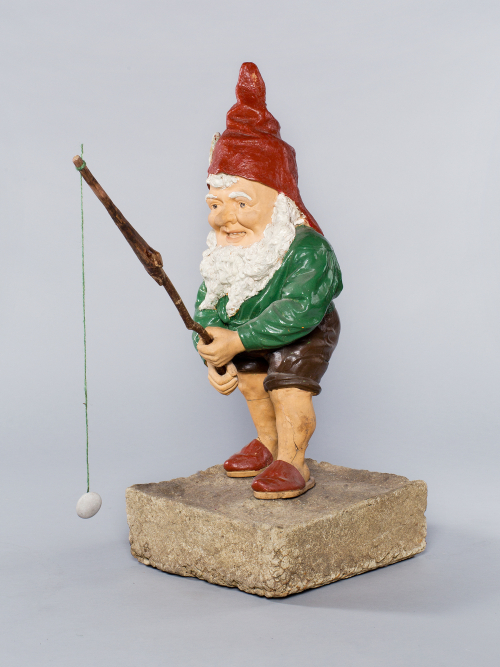 When we were researching our exhibits, I made an appointment to visit the Garden Museum to view their collection of historic gnomes. At that time, the Museum was closed for a major renovation programme, and so my first task on meeting Emma House, the curator, was to don a hard hat and a pair of sturdy boots before being allowed inside. I had originally been interested in a group of gnomes that had been hand-carved by German prisoners-of-war, but on closer inspection they turned out to be too small (although beautifully made) to have the impact we desired. Emma then showed me their Disney gnomes (too garish) and their Tony Blair gnome (not everyone's cup of tea); and it was then that we set eyes on this fishing gnome, sitting in one corner of the gallery. He dates from around the year 1900 and was made by Heissner of Germany, the world's foremost maker of garden gnomes. As Emma told me, he was the Garden Museum's oldest and most historically significant gnome. He fitted the bill in so many ways: fans of the Harry Potter novels may recall that Ron Weasley described the Muggle craze for garden gnomes, described as 'fat little Father Christmases with fishing rods' (Harry Potter and the Chamber of Secrets).

And so the British Library submitted its loan request. Last October, after all the necessary arrangements had been made and the fishing gnome had been safely packed, he made the short journey across London to our own exhibition.