If you live in the United Kingdom, you may be aware that 2018 marks the 100th anniversary of the Representation of the People Act, which for the first time gave some women in Britain the right to vote. The commemorations being held this year celebrate earlier efforts to enfranchise women, as well as examples of remarkable women from former times. In recent months, this blog has featured the Greek poet, Sappho, and Lady Jane Grey, England's forgotten Queen. 2018 also marks the 1,100th anniversary of the death of Æthelflaed, Lady of the Mercians, who is the subject of today's blogpost. 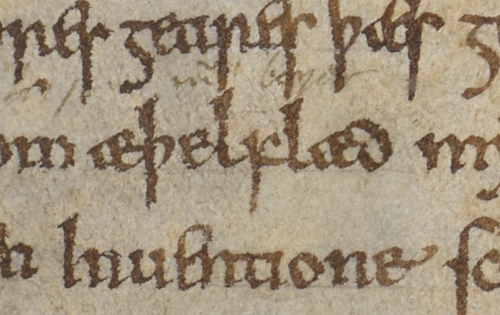 Æthelflaed was the eldest child of Alfred the Great, king of the West Saxons (reigned 871–899), and his wife Ealhswith. Ealhswith may have been related in turn to the royal house of the nearby kingdom of Mercia. Under pressure during the viking invasions at the end of the 9th century, King Alfred made an alliance with Æthelred, lord of the Mercians. Æthelflaed subsequently married Æthelred, strengthening this bond. 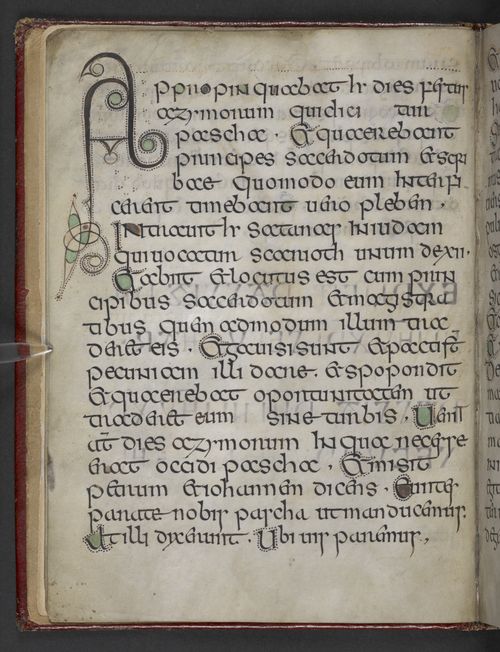 By the first years of the 10th century, Æthelred had become very ill. When he died in 911, Æthelflaed became the ruler of the Mercians in her own right. As lady of the Mercians ('Myrcna hlæfdige'), Æthelflaed expanded her territories to the north, east and west. She fortified settlements, or burhs, and led her armies into Wales and Northumbria. In the final year of her life, the people of York even pledged to obey her ‘direction’ ('rædenne'). It is possible that some of her military exploits were coordinated to help her brother, King Edward the Elder (reigned 899–924), but at other times Æthelflaed seems to have been acting independently. 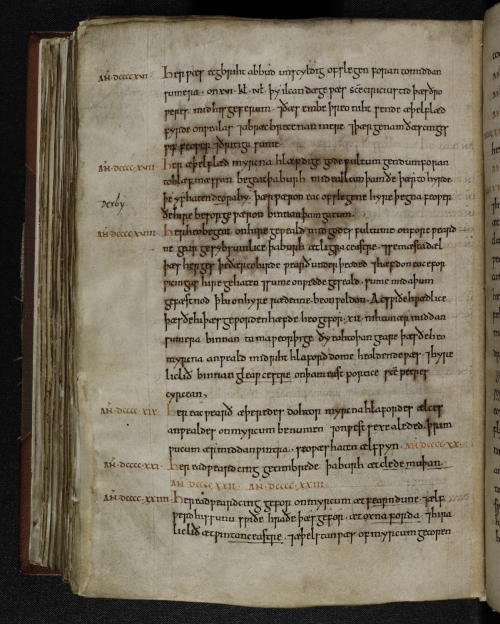 A page from the Anglo-Saxon Chronicle showing the entries of the Mercian Register: Cotton MS Tiberius B I, f. 140v

You may wonder how we know so much about Æthelflaed. We are fortunate in Æthelflaed's case because a narrative of Mercian affairs, for the years 904–924, is found embedded in the Anglo-Saxon Chronicle. This is known as the ‘Mercian Register’, and it provides a very different account of events from the main text of the Anglo-Saxon Chronicle, which focuses on Edward the Elder. For example, when discussing what happened during the same months in 916, one chronicle focuses on Edward building a burh; the other details the causes and results of Æthelflaed’s military campaign into Wales. 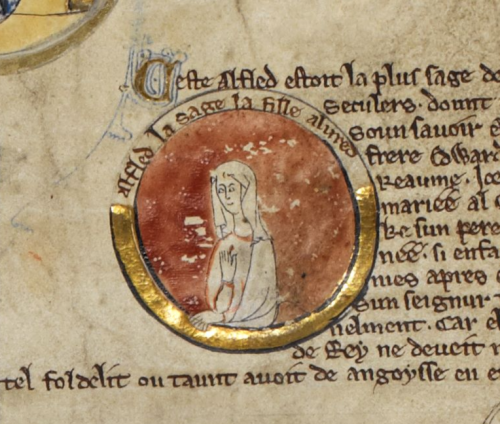 Æthelflaed was remembered long after her death. Here she is depicted in a roundel from a 13th-century geneaology of the kings of England: Royal MS 14 B V, membrane 2

Æthelflaed’s reign was unusual. Her successful political career did not necessarily reflect tolerant contemporary attitudes towards women, and (with one brief exception) she did not pave the way for future Anglo-Saxon female leaders. According to Asser, her father’s biographer, the West Saxon court where she grew up was particularly opposed to over-mighty queens: 'The West Saxons do not allow a queen to sit beside the king, nor to be called a queen, but only the king’s wife [because of] a certain obstinate and malevolent queen [from Mercia], who did everything she could against her lord and whole people' (Asser, Life of Alfred, chapter 13, translated by M. Lapidge and S. Keynes, Alfred the Great).

Æthelflaed was initially succeeded by her daughter, Ælfwynn, whose reign was significantly shorter. The Mercian Register claims that just one year later, in 919, 'the daughter of Æthelred, lord of the Mercians, was deprived of all authority in Mercia and taken into Wessex, three weeks before Christmas' (The Anglo-Saxon Chronicle: A Revised Translation, trans. by D. Whitelock and others (London: Eyre and Spottiswoode, 1961), p. 67). England would have to wait several hundred years for another queen to rule unchallenged in her own right.

Harley MS 2965 - its fascinating to see the ampersands and letter decoration...very simple and so so similar to that in Kells.

She fought Vikings to submission

And some grant her erudition.

Athelflaed O Aethelflaed whom no one ever called unread

She burrowed in Chester and Worcester.

No Viking could ever resist her.

If your nation lacks a leader

Send a scop to Aethelfleada.

The Mercian lady of whom we’re all fond.

The belle of the burghs on this side of the pond.

She can’t put a Foot wrong bringing forth Engellond

Though she’s just a page for Stenton

She now gets much more attention.

She’s the killjoy at your party

The Chronicler tries to sort out where she’s been.

In Runcorn, in Warwick, in Derby she’s seen.

They who played find the lady play God save the Queen.