In the 13th century, a mysterious annotator with shaky handwriting made marginal or interlinear notes (glosses) in around 20 manuscripts which belonged to Worcester Cathedral Priory. The Tremulous Hand — as he is now known — was from one of the last generations of people who could understand Old English. He is thought to have suffered from a nerve condition called ‘essential tremor’, a type of uncontrollable shaking that mainly affects the hands, which today affects around four out of 100 adults over the age of 40. His glosses show that he was concerned that knowledge of the past, as well as knowledge of an earlier form of his language, should not be lost. Here at the British Library we regard him in very fond terms, because we try to do the same things today.

In one of the British Library manuscripts which contains glosses by the Tremulous Hand, we get a powerful sense of how much Modern English owes to Old English, but also to Latin. Have you ever felt amorous? Or maybe only loving? Presumably you’ve been to villages as well as towns? Have you ever contemplated the celestial realm, which we also call heaven? The words in these sentences have both Old English and Latin roots and some of them are largely unchanged from their earlier forms. If we take a look at this page of the manuscript in question (Cotton MS Otho C I/2), we get some sense of this. 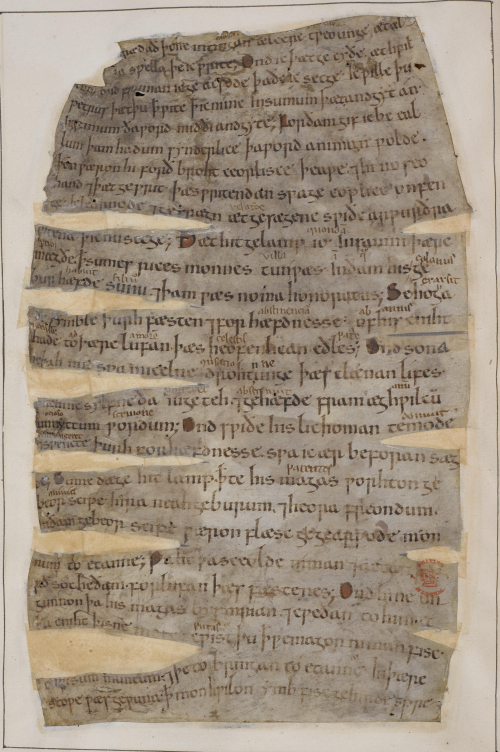 Here you may be able to make out the words ‘amore’ [love] above ‘lufan’; ‘celestis’ [heaven] above ‘heofen’; ‘villa’ [town] above ‘tun’; ‘parentes’ [kinsmen] above ‘magas’; ‘abstinentia’ [abstinence, restraint] above ‘for-hæfednes’; and ‘sermone’ [speech,words, conversation] above ‘wordum’. In the last case, the letter that looks like a ‘p’ is actually a runic ƿ, wynn, for ‘w’… So, you see you can already understand some Old English and some Latin.

We like to think that if the Tremulous Hand ever came across the text called Ælfric’s Colloquy, he might have approved of it. The Colloquy, which was written by Ælfric of Eynsham (c. 950–c. 1010), was an educational text aimed at helping novice monks learn Latin. It is structured like a conversation between a teacher and his pupils, who all have different professions. When we learn languages today, we often practice conversations, again not so dissimilar to our forebears.

In the copy of this text at the British Library, which dates from 1025–1050, a glossator (not the Tremulous Hand) added an Old English translation of the Latin text, in the spaces between the lines. In one exchange, the teacher asks his pupils:

[We do not want to be as wild beasts, who know of nothing but grass and water.] 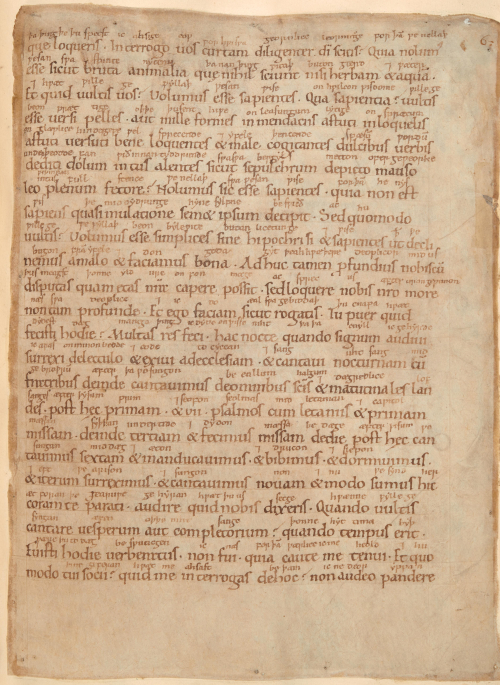 The Tremulous Hand would surely have agreed. He was keen that others after him should also be able to learn. Have you ever wanted to understand more about the Old English Language, and to be able to read some of the most magical texts of the Anglo-Saxon period? If so, please sign up for our Old English Masterclass, which will be held from 28–29 April. Places are strictly limited, so we advise you to book your place on the course soon.

You can find out more about the Tremulous Hand and Ælfric’s Colloquy on the British Library's new site, Discovering Literature: Medieval, which contains a host of accessible articles about aspects of literature in England from the 8th to the 16th centuries.

Posted by Ancient, Medieval, and Early Modern Manuscripts at 2:09 PM