The copying and decoration of the Lindisfarne Gospels represent a remarkable artistic achievement. The book’s importance lies in the evidence of its production, the beauty of its illustration and the late 10th-century added gloss of its text that is the earliest rendering of the Gospels in the English language. The Gospels were made on Lindisfarne island, in Northumbria, around 700. The manuscript has been fully digitised and can be viewed here in great detail, with the zoom function, on our Digitised Manuscripts site (Cotton MS Nero D IV). 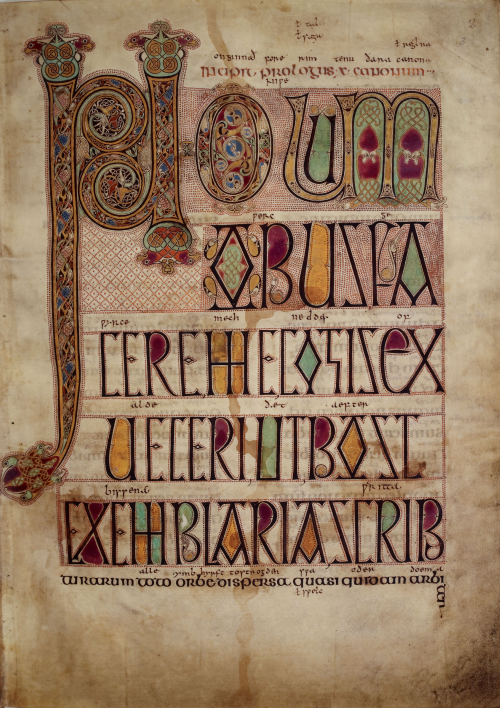 The book includes five highly elaborate full-page carpet pages, so-called because of their resemblance to Oriental carpets (indeed, some scholars have argued for the direct influence of carpets on their design). Four of the carpet pages appear before the beginning of a Gospel; the fifth precedes the book’s prefatory material. This material includes the associated texts that typically form part of Gospel-books, such as letters of St Jerome (d. 420), chapter lists and the ten canon tables (for more on the canon tables, see our previous blogpost). The first carpet page is now on display in the British Library’s Treasures Gallery for three months, as part of the manuscript's regular conservation rotation schedule. 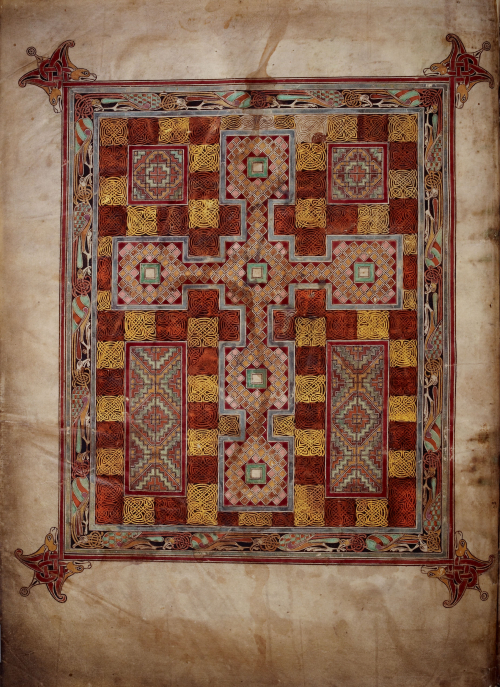 Each carpet page has a cross pattern embedded in its design. It seems likely that these pages were designed to serve as a sort of interior treasure binding to ornament each Gospel as a mirror of the ornate exterior one that once was ‘bedecked with gold and gems’, according to the colophon. Certainly the affinities with surviving contemporary precious metalwork such as the Sutton Hoo treasure are readily apparent in the carpet page panels, with their interlace patterns, intertwined sinuous and elongated twisted bodies and stylized birds’ and beasts’ heads.

From April 2018, the Lindisfarne Gospels will be off display in compliance with the conservation rotation schedule, which requires that the manuscript be rested for six months once it has been on show for eighteen months. From 19 October, the Gospels will again be on display as part of the British Library's Anglo-Saxon Kingdoms exhibition.

Can you tell us the text from the first image for those of who know a bit of Latin and/or might be interested in the Anglo Saxon, but don't have enough familiarity with the ancient scripts to make it all out?

Thanks for an interesting blog!