The Medieval Origins of Valentine's Day

At the bottom of folio 243r of the beautiful Queen Mary Psalter, there is an image of a kneeling man about to have his head cut off. Given that he is being threatened with imminent decapitation, his expression is calm. His hands are pressed together in prayer and he seems blithely unconcerned that the man standing in front of him with a raised sword has grabbed him by his tonsured head. There is little in this image that would make you think of romance. And nothing here seems loving, so it is perhaps surprising to the modern viewer that the inscription at the bottom of the image indicates that this is an image of Saint Valentine. 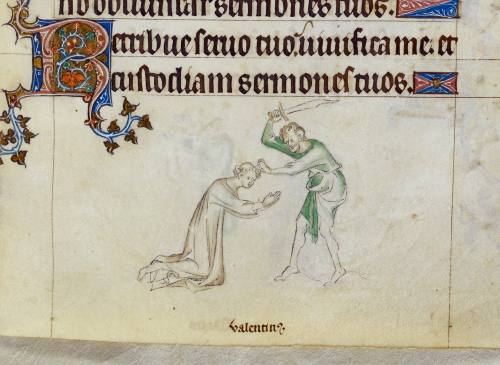 When the Queen Mary Psalter was made, in the early 14th century, there was probably little or no association between Saint Valentine and love. So why is 14th February considered a day for romance?

Who was Saint Valentine?

The Roman Martyrology (the official list of martyrs in the Catholic Church) lists two Saint Valentines for 14th February – one was a bishop from Terni, in Central Italy, who was martyred in Rome, while the other was a Roman priest martyred on the Flaminian Way. Some sources suggest there weren’t actually two and that these two were the same person: so far, so unromantic.

The association between Saint Valentine’s Day and lovers is the fault of one Geoffrey Chaucer (c. 1340–1400). In his late 14th-century comic dream-vision, the Parliament of Fowls, he describes a group of birds who gather together in the early spring – on ‘seynt valentynes day’ – to choose their mates for the year. Some scholars have suggested that the poem was written for King Richard II (1367–1400) during the negotiations over his marriage to Anne of Bohemia in 1380.

Either way, it seems that the poem sparked (or at least cemented) a tradition. In 1477, Margery Brews, a Norfolk woman, wrote a letter to her cousin John Paston, calling him ‘my right well beloved Valentine’. It is the earliest known letter of its kind. In the 15th century, the poet John Lydgate wrote a valentine’s poem addressed to the Virgin Mary. This is the inevitable consequence of letting a Benedictine monk get behind the wheel of a courtly love poem. 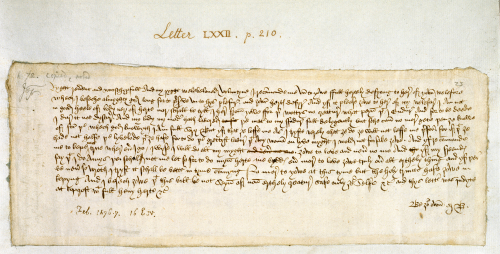 Don’t like Valentine’s Day? Fear not – the poem ends with the birds singing a song, having failed to choose their mates and deciding to defer the decision until the next year.

You can read more about the Parliament of Fowls on our new learning website, Discovering Literature: Medieval, which contains a host of resources for finding out more about literature in England throughout the medieval period, from the 8th to 16th century.