A calendar page for March 2018

There’s something fishy about the blog today: it’s Pisces, the zodiac sign for March, from the 11th-century calendar we are exploring month by month this year (Cotton MS Julius A VI). 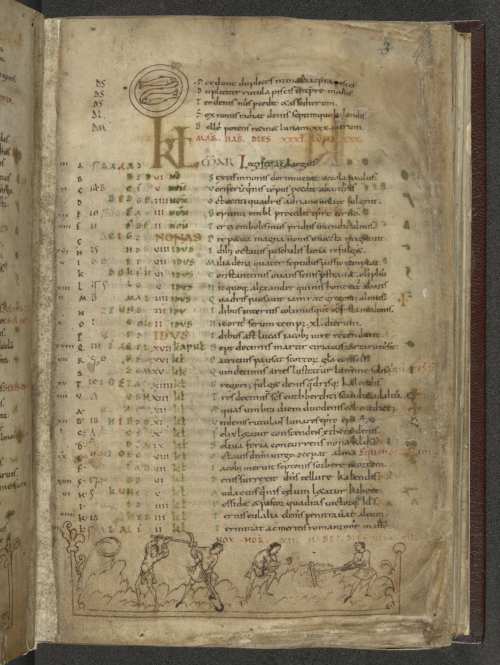 The zodiac symbol Pisces, represented by two fish, appears at the top of the page. Other zodiac symbols went through many different interpretations and presentations in different medieval calendars, even in closely related manuscripts. For example, Capricorn is depicted differently in this manuscript from the way Capricorn appears in its close relative, another 11th-century calendar also attributed to Canterbury (Cotton MS Tiberius B V/1). The representation of Pisces is remarkably consistent in much of medieval art, as two fish facing opposite directions, connected by a line. 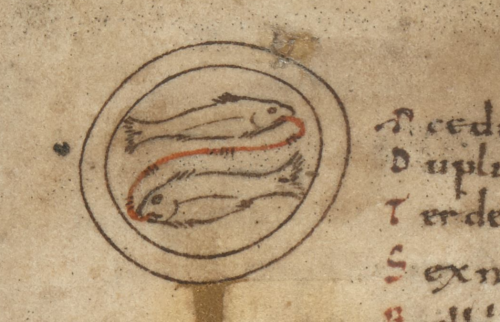 Reading down the page, you’ll notice several gold crosses. These were added by an early user of the calendar (or possibly by its original scribe) to mark out important feasts. In contrast to the pages for January and February, each of which had one or two crosses, four feasts were highlighted with gold crosses on the page for March: the death of Pope Gregory the Great (12 March), the feast of St Cuthbert (20 March), one of the feasts of St Benedict of Nursia (21 March), and the feast of the Annunciation (25 March).

Detail of the feasts of St Cuthbert, St Benedict and the Annunciation  marked out with gold crosses, Cotton MS Julius A VI, f. 4r

This proliferation of important feasts may reflect the number of significant saints with feast days in March. The calendar and its models were probably made at a reformed monastery or cathedral, as discussed in the post for January. As a community that followed the Rule of St Benedict, his feast days would inevitably have been important to the calendars' creators and owners, and reformed monks were particularly devoted to the Virgin Mary and her feast days. Meanwhile, Gregory the Great was celebrated in England for sending missionaries and establishing the see of Canterbury, while Cuthbert, the 7th-century Northumbrian saint, was popular throughout Europe in the early Middle Ages. 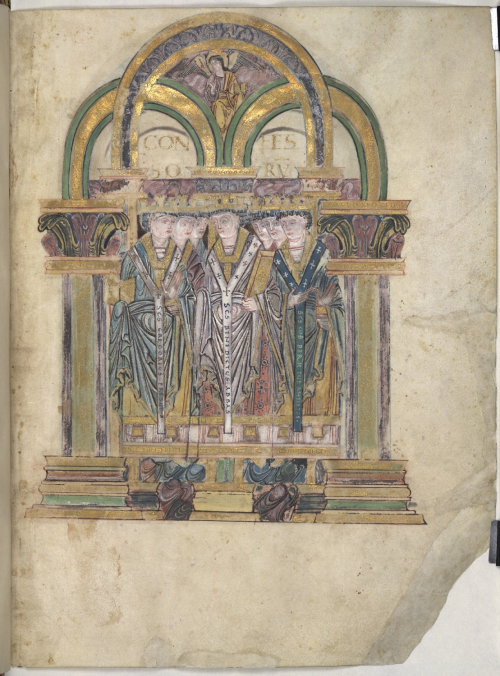 Saints Gregory, Benedict and Cuthbert are depicted in the front row of the choir of confessors. They can be identified by the names on their stoles. From the Benedictional  of St Æthelwold, England (Winchester or Thorney), c. 963-984, Add MS 49598, f.1r

There may also be another explanation for the number of feasts singled out in March. The month of March often coincided with Lent, the period of fasting before Easter. Sundays and major feast days were exempt from the fast. Perhaps it was in the annotator’s interest to highlight many important feast days when fasting could be suspended.

Detail of diggers and sowers, from Cotton MS Julius A VI, f. 4r

The page ends with the labour of the month. Here, labourers are portrayed digging and sowing. Sowing, along with ploughing, was also portrayed in the calendar page for January. However, sowing may not have taken place in January, and the January image may have been more symbolic. For many crops, March was closer to the time for sowing than January.

For more on this manuscript (and for details about when you will be able to see it in person), see our previous blogpost 'A calendar page for January' and check out this blogpost to find previous years’ calendar pages, and explanations of medieval calendars.