Cryptography is not something we normally associate with medieval manuscripts. But some medieval scribes understood the basics of code-making: constructing text using a cypher to be decoded and understood only by authorized parties. Anglo-Saxon scribes were masters at this, without the ‘espionage’ and political edge that cryptography would later acquire in the early modern period. The interest in code may be related to the popularity of riddles for which Anglo-Saxon England is famous. In some instances, codes were placed at the end of a manuscript as a way to record information relating to how a manuscript was produced and the people who were involved in its production. A colophon, as this information is called, was the preferred place for encrypted information in the Middle Ages.

For instance, as we wrote in a previous blogpost, a scribe called Ælfsige left his name in code, as well as that of the book's owner, in the colophon of Cotton MS Titus D XXVII:

The cypher consists of replacing vowels with the neighbouring consonants in the alphabet. The word Aelsinus (Latin for Ælfsige), the scribe’s name, was here encoded as ‘Flsknxs’ (in medieval manuscripts, the letter ‘s’ resembled the letter ‘f’).

The book belonged to a fellow monk called Ælfwine (Ælfwinus in Latin), whose name was encrypted as ‘Flfƿknp’. This time, the cypher is slightly different. ‘P’ here replaces ‘us’. The first letter that looks like 'p' in this inscription is the runic letter 'wynn', which early English writers sometimes used to represent the 'w' sound.

The encrypted text is much longer and explains that Ælfsige, ‘the most humble brother and monk’, wrote the book and that ‘Ælfwinus, monk and deacon’, owned it.

This cryptic art continued in the late Middle Ages. In a manuscript produced in France in the second half of the 12th century, containing medical works (Egerton MS 2900), the scribe used the same kind of cypher to mark the end of his copying effort, and not without effect. 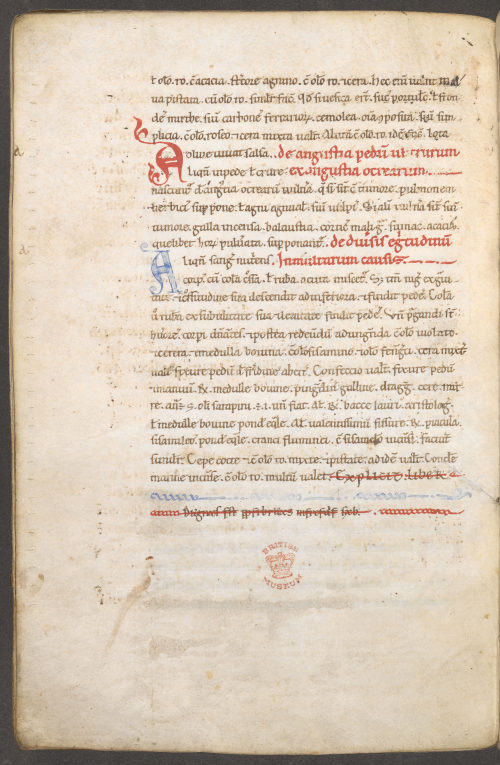 The last line, crossed through in red ink (a form of medieval highlighting), reads: ‘'Dkgnxs fst ppfrbrkxs mfrcfdf sxb’. The scribe also marked off the sentence from the rest of the text with red-and-blue line fillers, as shown in the image below.

This encrypted message can be decoded using the same consonant-for-vowel technique, which yields the following text: ‘Dignus est operarius mercede sua’. The Latin comes from the Gospel of Luke (chapter 10, verse 7) and states that ‘the worker is worthy of his reward’.

In a late 11th- or early 12th-century French manuscript (Royal MS 13 A XI), the scribe included Bede's explanation about how numbers can be substituted for letters based on their order in the alphabet. They can then be communicated via a system of finger-reckoning. Bede explained that, ‘if you wish to warn a friend who is among traitors to act cautiously, show with your fingers [the signs for] 3, 1, 20, 19, 5 and 1, 7, 5; in this order, the letters signify ‘act cautiously’ (caute age in Latin) (Royal MS 13 A XI, f. 33v). The finger signs from 1 to 9000 are presented in a reference table. 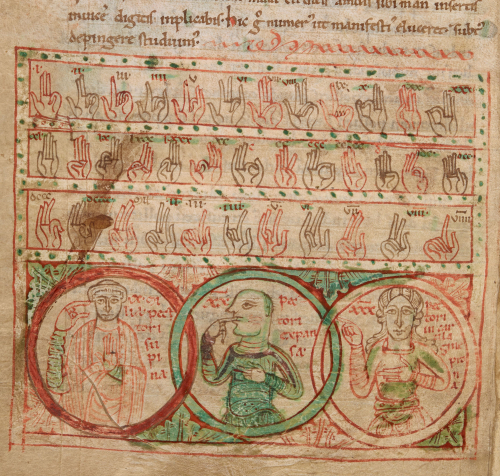 Bede also assured his readers that, if ‘greater secrecy is demanded,’ the Greek alphabet can help with a stronger level of encryption. The number values for Greek letters could be correlated with the Latin alphabet; any Latin word could thus be written in Greek code, based on their order in the alphabet and the number value of the relevant Greek letter. 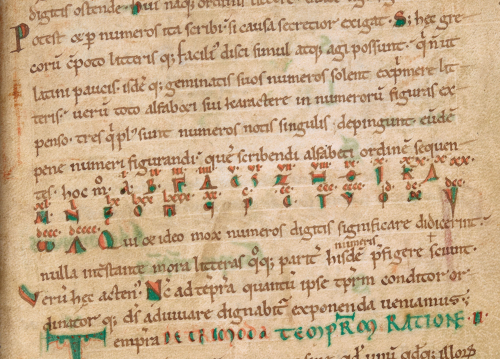