A Bible fit for a king

As regular readers of this Blog will know, the display of the Lindisfarne Gospels follows a conservation programme recommended by an international committee of experts. It is now back in secure storage for a rest period, until the autumn when it will be back on display and featured in the Anglo-Saxon Kingdoms exhibition at the British Library.

In its place we have just put out on display in the British Library's Sir John Ritblat Gallery (Royal MS 15 D I and Royal MS 18 D IX) two volumes that have been described as forming the most beautiful Bible in French ever made (Berger, La Bible (1884), p. 389; a companion volume is Royal MS 18 D X). Their large number of images, which illustrate a wide range of Old and New Testament subjects, certainly make the Bible among the most profusely illustrated. Moreover, many of their illustrations treat their biblical subjects with a painterly breadth and spaciousness that distinguish them from other late medieval Bible miniatures. Overall, the Bible is an eloquent witness to why Gabriel Tetzel, a visitor to England, described the court of Edward IV (r. 1461–83) in February 1466 as ‘the most splendid … in all Christendom’ (cited in Charles Ross, Edward IV (London, 1974), p. 259).

These volumes were produced in Bruges, one of the most vibrant commercial and artistic centres in Europe during the second half of the 15th  century. Bruges teemed with book artisans capable of producing high quality manuscripts for wealthy clients. 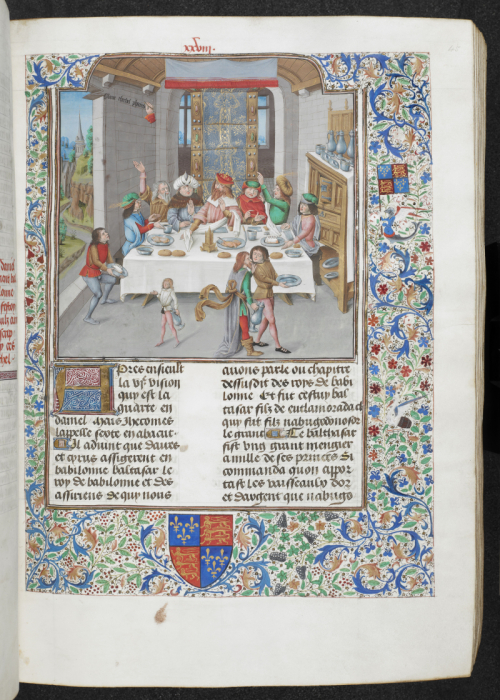 As he sits feasting at his table, King Belshazzar is distressed at the sight of a disembodied human hand writing on the wall of his chamber, in the book of Daniel: Royal MS 15 D I, f. 45r

As in many such volumes, the illumination is the result of close collaboration between several artists. All but one of its eleven large miniatures in the volume including the books of Tobit to the Acts of the Apostles (Royal MS 15 D I) were contributed by a principal artist working with a talented assistant. In such images as Belshazzar’s Feast these two illuminators developed striking compositions, the basic simplicity of which is enlivened by the bold application of a lively palette and the introduction of a range of complicated figure poses. Despite their large size, all the illustrations focus almost entirely on one episode each. 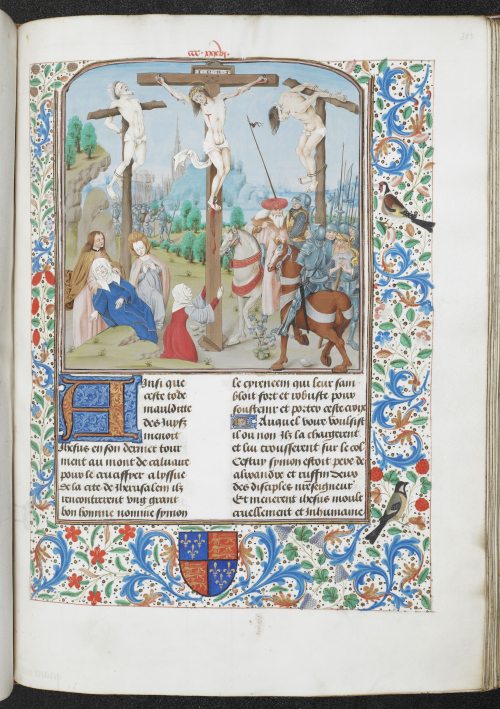 Christ dies on the Cross between the two thieves, as Mary falls into the arms of St John, the other two women look on in grief and the Centurion and soldiers converse, in the Gospel Harmony: Royal MS 15 D I, f. 353r

Additional scenes are relegated to obscure corners of the miniatures and easily overlooked by the viewer. In putting together their paintings, the two miniaturists drew on a stock of patterns of both individual figures and groups. Sources for the impressive Crucifixion, for example, include an earlier Netherlandish engraving of the same subject for the two thieves and a panel painting of the Crucifixion by the celebrated Netherlandish painter Rogier van der Weyden (d. 1464) for the crucified Christ. 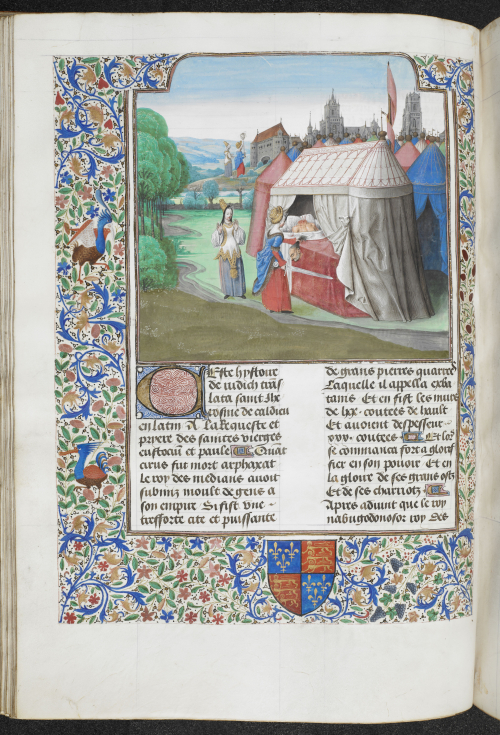 Judith holds the head of the Assyrian general Holofernes whom she has beheaded while in a drunken stupor in his tent outside the besieged city of Bethulia; in the background she carries his head on the point of her sword back to the city, in the book of Judith: Royal MS 15 D I, f. 66v

The only large miniature not painted by these two artists, The Death of Holofernes, was contributed by a painter who worked with a more subdued palette and had greater interest in the depiction of space and the play of light over forms.

Like many of his royal predecessors, Edward IV sought to possess some of the finest books produced on the Continent. As a result he established a remarkable collection of lavish south Netherlandish manuscripts that reflected contemporary aristocratic taste for French instructional and historicising texts enlivened by colourful illuminations. At the beginning of the Tobit to Acts volume, an inscription by the scribe Jan du Ries identifies the date of his manuscript as 1470 and its patron as Edward. However, the volume appears not to have been originally intended for the English king. Edward’s name and titles have clearly been written over an erasure and were not part of du Ries’s original text. Further evidence suggests that the volume was completed for Edward much later. 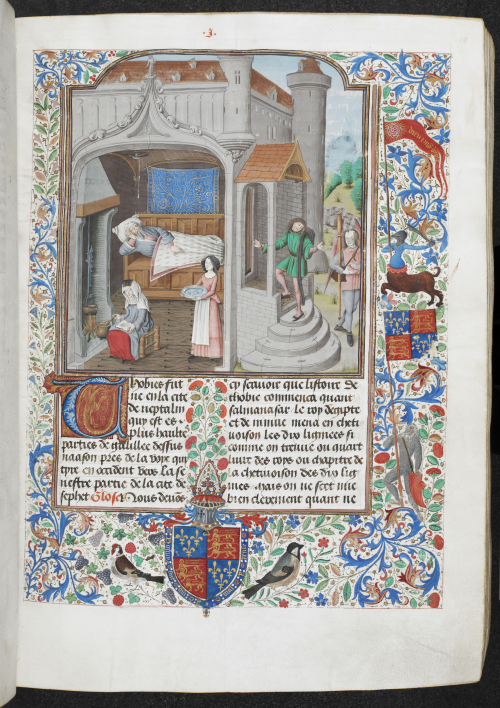 Tobit is blinded by bird droppings while he lies asleep in his house; outside Tobit’s son Tobias converses with the angel Raphael disguised as a traveller, at the beginning of the book of Tobit: Royal MS 15 D I, f. 18r

The two companion volumes that make up the remainder of his Bible historiale are dated 1479, a date that conforms to what we now know to have been Edward’s principal period of collecting Netherlandish illuminated manuscripts. Detailed analysis of the heraldry and border decoration, together with an analysis of the costumes of the figures, confirms that the decoration of this volume also formed part of that campaign around 1479. 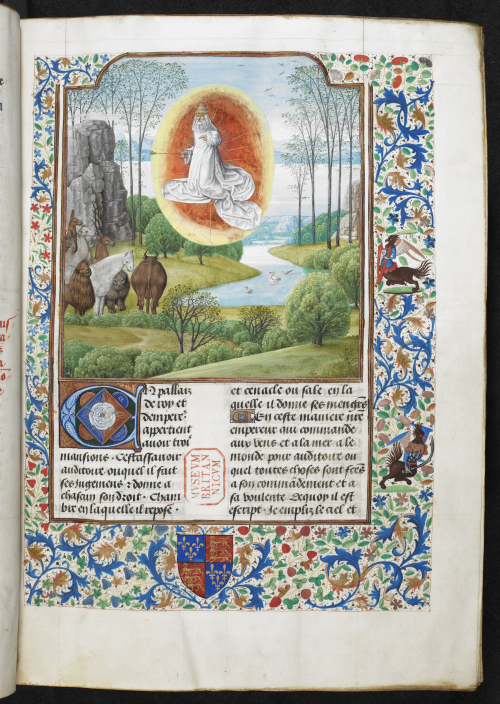 The other volume on display features a magnificent image of God creating the animals, painted in vivid detail. Probably for lack of an earlier patron with sufficient interest and wealth, the high ambition of the planners of this copy of the Bible historiale remained unfulfilled until several years after the writing of the text, when the painting was finally completed for the English king.

Thomas Kren and Scot McKendrick, Illuminating the Renaissance: The Triumph of Flemish Manuscript Painting in Europe (Los Angeles, 2003), no. 82.

Scot McKendrick, ‘The Manuscripts of Edward IV: The Documentary Evidence’, in 1000 Years of Royal Books and Manuscripts, ed. by Kathleen Doyle and Scot McKendrick (London, 2013), pp. 149–77.

Scot McKendrick and Kathleen Doyle, The Art of the Bible: Illuminated Manuscripts from the Medieval World (London: Thames & Hudson, 2016), no. 42.