A calendar page for April 2018

It's April, which means it's time to party. At least, in a calendar page for this month, made about 1,000 years ago, a party is in progress: men are drinking and chatting, seated on an ornate couch.

Detail of feasting, from a calendar page for April: Cotton MS Julius A VI, f. 4v

The artists of the two surviving, illustrated calendars from early 11th-century England both depicted scenes of feasting on the calendar page for April. They may have chosen to depict feasting in April because Easter often falls in that month. Indeed, in Old English, April was called Eáster-mónaþ (Easter month). Easter was a major holiday in early medieval western Europe, on a par with Christmas. Surviving sources mention it was also an occasion for political gatherings and grand ceremonies such as coronations and important royal meetings, where law codes were issued and other announcements made. For example, the prologue of the first law-code of King Edmund (reigned 939–946) states that Edmund called a meeting of a great number of nobles and churchmen in London, ‘during holy Easter-tide’ (‘halgan easterlicon tid’: Cotton MS Nero A I, f. 87v).

Closer examination of the image reveals a number of intriguing details, from spears and shields to a variety of drinking vessels. The left-most figure (see a detail below) pours liquid from a jug into a drinking horn. Archaeological examples of early medieval drinking horns have been found throughout northern Europe and beyond. In the centre, two men are holding drinking vessels with stems. The image may also hint at some types of objects which do not survive in the archaeological record. The seated figures are perched on cushions. Likewise, elaborate couches with sculptures of animals, if they were made of wood, would not have survived. However, it can not be proved if this scene, and the one in a related calendar, were imitating the way parties and furniture were depicted in classical art, or if these scenes were intended to represent contemporary furnishings. 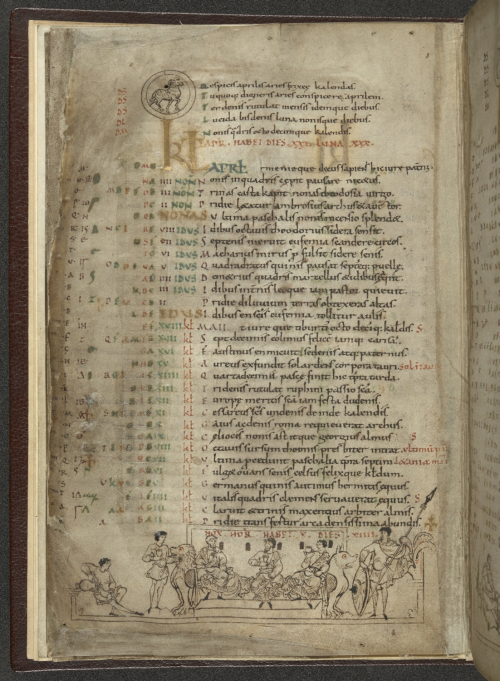 In addition to the illustration of the ‘labour’ of the month, the calendar page for April has the information and decoration found on other pages in this calendar. The zodiac symbol — Aries — appears in a roundel at the top. Information about the date, astronomical cycles and days of the week are highlighted in rows of red, green, blue and gold.

There is something slightly different about this page. Unlike the pages for February and March, only one feast is marked out with a gold cross in the margin of the page for April, at the very end of the month. The day marked out is 30 April, which, according to this calendar, was ‘the first day [Noah’s] Ark was carried out of the waves onto solid [ground]’ (‘Pridie transfertur arca densissima abundis’).  The lack of gold crosses earlier in the month might have something to do with the association of April and Easter, since Holy Week and Easter took precedence over other feasts. They could not be marked in this reusable calendar because their dates changed. However, the latest date Easter can fall is 25 April, so the feast of Noah’s Ark could safely be celebrated on 30 April. Detail of a depiction of Noah's Ark, made around the same time as the calendar: from the Old English Hexateuch, Southern England, 11th century: Cotton MS Claudius B IV, f. 15v