Today is 1 May, which means summer is almost here. Well, it is according to the calendar we are exploring this year, which was made in southern England about 1000 years ago. 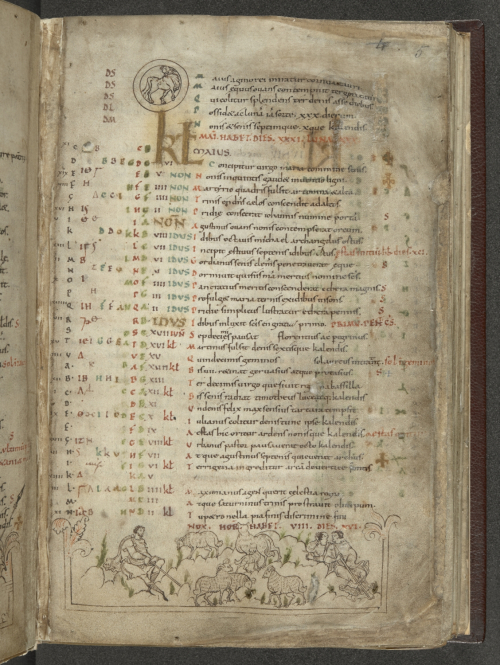 Calendar page for May, from Cotton MS Julius A VI, f. 5r

Each day in this calendar has a verse of poetry that describes a notable event associated with that date. These are often saints’ days, but astronomical and other events are mentioned as well. The verse for 9 May, shown below, reads: ‘Here begins the summery heat for 7 multiplied by 13 [days].’ Just to make sure no one missed it, the red text in the margin clarifies: ‘The beginning of summer. It has 91 days.’ That might be a bit much to hope for this year.

Indeed, in case the weather isn’t feeling quite like summer in 9 days’ time, the poem offers a second possible start date for warm weather: ‘Burning summer is born on the ninth day before 1 June’, namely 24 May (in the first line below).

Other special days in May were marked out with gold crosses in the margin of this calendar. These include 1 May, the feast of St Philip and James, although the verse for that day is either incomplete or has been erased. 3 May is also marked out: it was the feast of St Helena’s rediscovery of the Cross. There is also a gold cross by 26 May, which commemorates ‘Augustine, who crossed over the curve of this world [died] seven days before 1 June.’  This was a reference to St Augustine, the first archbishop of Canterbury, not St Augustine of Hippo. Early medieval people understood that the world was round, so in art and literature part of the world and its atmosphere were sometimes represented in abbreviated form as a curved shape or arch. Detail of an historiated initial showing Christ sitting on the arc of the world, from the Cnut Gospels, England, pre-1019, Royal MS 1 D IX, f. 66r

In addition to containing a poem for each day of the year, this calendar is also one of only two illustrated calendars to survive from 11th-century England. (The other is Cotton MS Tiberius B V/1.) Each page includes depictions of zodiac symbols and agricultural and social activities. For May, those are Taurus the bull and shepherding respectively. Interestingly, one shepherd is portrayed dressed as a layman, with a beard and short tunic, and two others are portrayed wearing long robes. It is unclear if their attire reflects the exemplar of this manuscript or if their long robes allude to the dress of monks and churchmen at this period. Christian leaders were often compared to shepherds. Today, some clergy are still called ‘pastors’, the Latin word for shepherd.

This calendar also includes a wealth of other information from the movements of the moon to the days of the week, as our post from January explains. Thanks to the The Polonsky Foundation England and France Project: Manuscripts from the British Library and the Bibliothèque nationale de France, 700-1200, you can explore this manuscript in full on the Digitised Manuscripts website.