If you visit Bruges in the near future, we highly recommend that you visit the exhibition Haute Lecture by Colard Mansion, on at the Groeningemuseum until 3 June 2018. The British Library is a major lender to this show, which is devoted to Colard Mansion, a clerk, printer and bibliophile who was active in Bruges between 1457 and 1484. Mansion worked with William Caxton and was the first to experiment with engravings as illustrations in printed books. In this exhibition, the style and composition of his woodcut illustrations are compared to images in contemporary illuminated manuscripts. 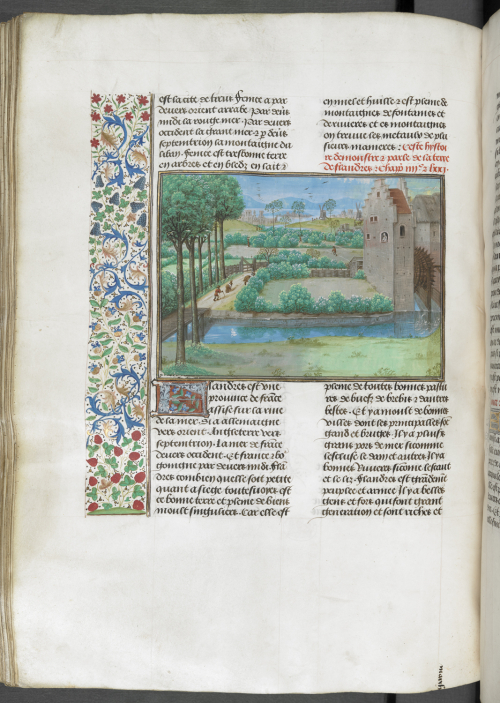 The British Library has loaned three illuminated manuscripts and four printed books to this exhibition. Two of these manuscripts — the Ovide Moralisé en prose and the Trésor des Histoires — were brought to the court of King Edward IV in the 15th century. Ovid’s Metamorphoses was a very popular text in the later Middle Ages, being widely copied in both Latin and in various French translations. The prose version, known as the Ovide Moralisé en prose, contains added moralisations that would have appealed to the tastes of the Burgundian elite. In Mansion's book, the scenes from the legends of Jason and the Golden Fleece and Helen of Troy have a similar composition to the ones in Edward IV’s manuscript copy. 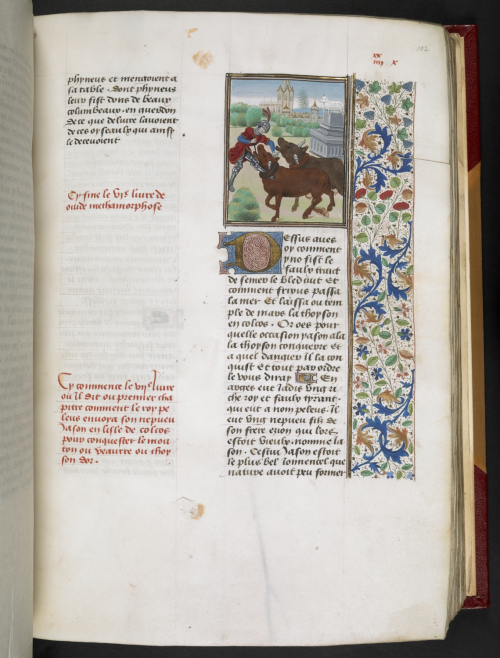 Jason yoking the oxen, with the Golden Fleece on a plinth in the background, from Ovide Moralisé en prose, Bruges, 4th quarter of the 15th century: Royal MS 17 E IV, f. 102r 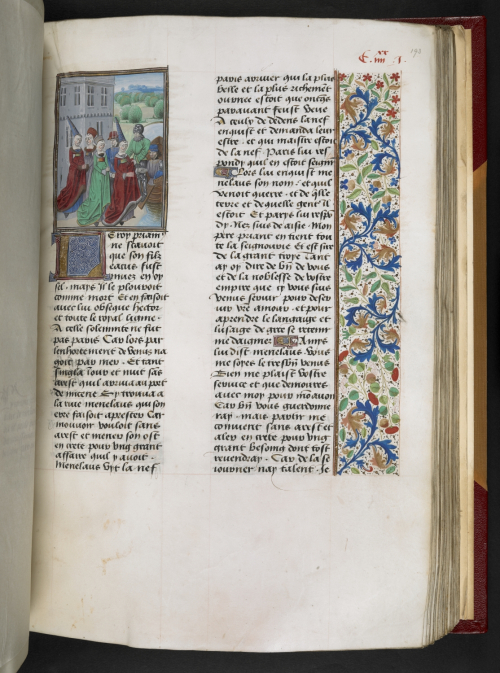 The manuscript of the Trésor des Histoires, a world history in French, contains some of the most sophisticated images associated with a secular chronicle. The miniature of Pope John XII on display in Bruges is attributed to the Master of the Getty Froissart, whose style is similar to that of the engraver of the illustrations in Mansion’s edition of Boccaccio, considered to be his masterpiece. 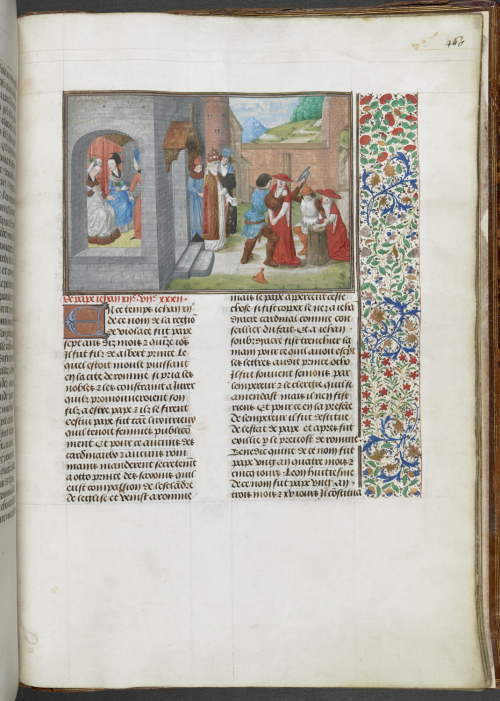 There are 55 large miniatures in this volume. The early view of the Flemish countryside reproduced at the beginning of this blogpost is a fine example of the use of perspective and the refined treatment of light and landscape.

The only surviving manuscript of a Flemish translation of Christine de Pizan’s Cité des Dames has also been loaned to the exhibition, and is presented in a section on women in society in Mansion’s milieu. Christine’s work was a response to the misogynistic writings of the time, taking examples from the life and deeds of virtuous women in history and mythology. Although the illustrations are sometimes unfinished, they are highly original, illustrating the trials and achievements of famous women. In the image below, Camilla, a motherless infant, is taken across a river in a boat made by her father, King Metabus of the Volscians, fleeing from his rebellious subjects. They hid in the woods, where she was fed on the milk of wild deer and grew up learning to hunt with a slingshot. 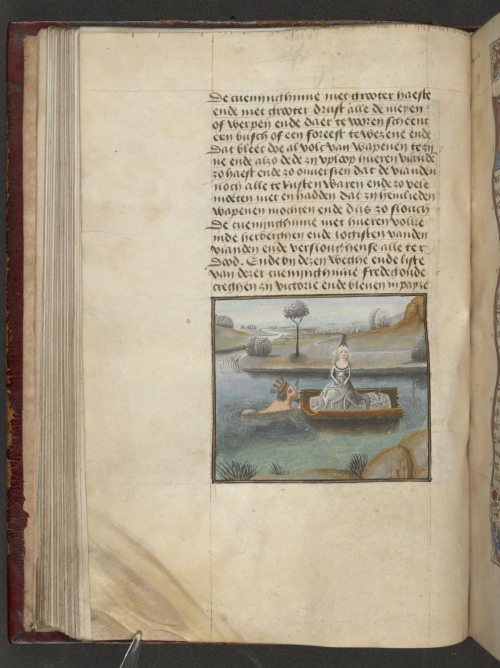 In another scene from the same manuscript, Fredegund, the widow of Chilperic, is shown leading the Frankish troops into battle with her son Clothar still at her breast, employing a clever ruse to defeat their enemies. 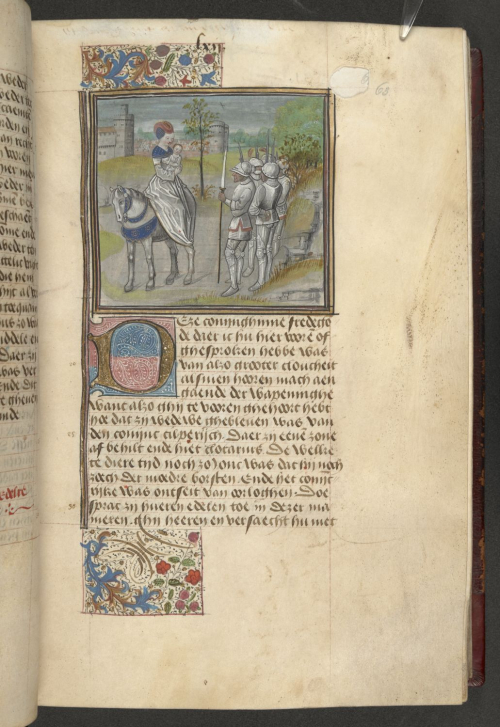 In addition, four British Library incunabula are on display in Bruges, two of which are the work of Colard Mansion: 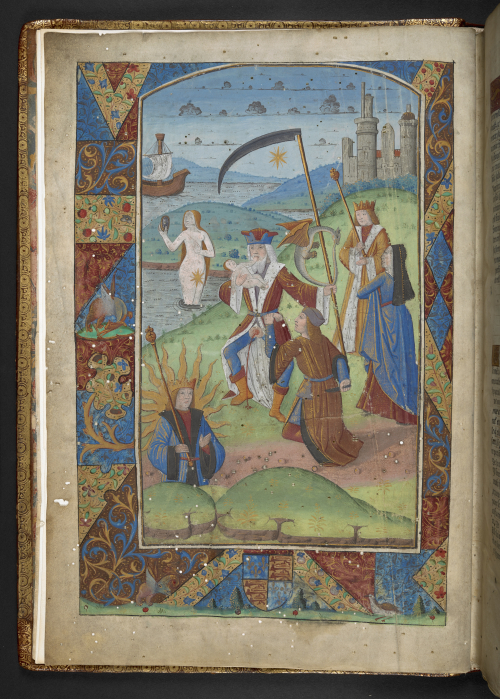 That is quite amazing detail in those illustrations!