The oldest English writing in the British Library?

Today the British Library holds over 150 million collection items and counting. They include most known languages but many, not surprisingly, are in English. So what is the oldest example of the English language held at the Library? The answer is more complicated than it might appear. Many Old English texts only survive in later copies, while the vast majority of our oldest manuscripts from early medieval England are in Latin, the principal language of learning and writing in western Europe at this period. As Bede wrote in his Ecclesiastical History, completed in 731, 'At the present time, languages of five peoples are spoken in the island of the Britain ... English, British, Irish, Pictish and the Latin languages.' 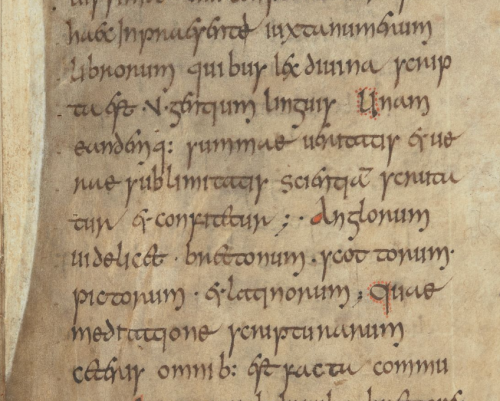 The English language first developed around the middle of the 5th century. It was based on the languages spoken by immigrants to the British Isles, who came from southern Scandinavia and parts of present-day Germany. These early dialects are collectively called 'Old English'.

The earliest texts in English survive as very short runic inscriptions on metal objects and ceramic pots. The earliest substantial example of English is the lawcode of King Æthelberht of Kent (reigned c. 589–616), but that work survives in just one manuscript (the Textus Roffensis), made in the 1120s. Several Old English manuscripts in the British Library may contain texts that were based on much earlier exemplars and stories, but their dates are uncertain, unlike the lawcode, which can be linked to a particular reign.

From the mid- to late 7th century, texts written in Latin survive from the region that is now England. One of these-- the second oldest single-sheet charter to survive from the Anglo-Saxon kingdoms -- does contain a few snippets of English. This is a charter of King Wihtred of Kent, written between 697 and 712, giving land to St Mary’s Church, Lyminge. The land is described as having ‘very well known boundaries’, including ‘barley way’ (bereueg) and ‘Maegwine’s path’ (meguines paed). These few words are possibly the oldest writing in Old English held at the British Library.

Detail of the boundaries with Old English names: Stowe Ch 1

Some of the earliest substantial texts in English in the British Library were written down at the end of the 8th century or the beginning of the 9th century. (Other institutions hold earlier examples, such as Old English versions of Caedmon’s hymn). One prayerbook made around 800 includes a translation of the Lord’s Prayer into Old English, along with other notes. It has also been associated with a female scribe or patron, so one of the earliest surviving examples of English may have been written by or for a woman. In the early 9th century, a gloss in Old English was added to parts of the 8th-century Vespasian Psalter (Cotton MS Vespasian A I). From the later 9th-century, there are fragments of the Old English Martyrology, some of the earliest manuscripts in the British Library to contain text primarily in English. The earliest, 'complete' book in English that survives at the British Library may be the Tollemache Orosius, an Old English adaptation of Orosius's History against the Pagans, made around 900. 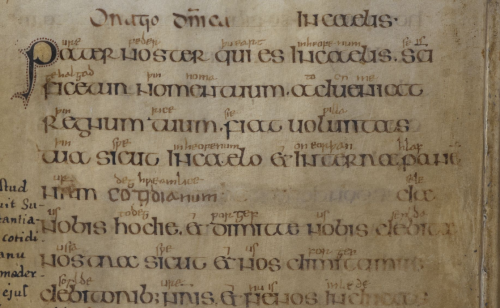 Detail of the Lord’s Prayer in Latin (in black ink) and Old English (written above the Latin text, in ink that now appears brown), in the Royal Prayerbook (Canterbury?, c. 800): Royal MS 2 A XX, f. 11v 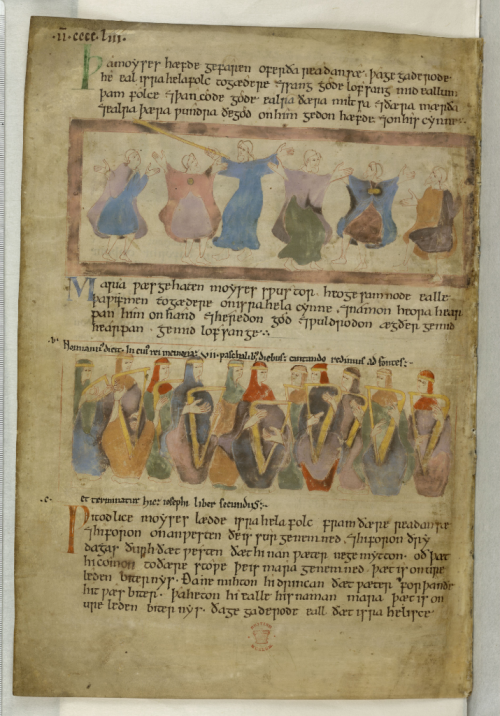 If you’d like to learn more about the development of the English language, among other things, please come to the British Library’s Anglo-Saxon Kingdoms exhibition, which runs from 19 October 2018 to 19 February 2019. You can also find further articles about Old English and examples of Old English literature on the British Library’s Discovering Literature: Medieval site.