Everyone loves a royal wedding

The wedding of Prince Harry and Miss Meghan Markle on 19 May at St George’s Chapel, Windsor, will include centuries-old royal traditions and ceremonial, as they take their vows before God, their families and the Queen. To celebrate this happy occasion, we are displaying two medieval manuscripts with stunning images of royal weddings in our Treasures Gallery at the British Library. Let’s look at some of the similarities and differences between weddings then and now.

Medieval royal weddings were lavish occasions with full traditional regalia, including gold and ermine, gifts and feasting. But these marriages were usually dynastic arrangements rather than love-matches, and the couple were sometimes still children. English kings often chose brides from among the French royalty, to seal a truce or to guarantee the support of the French king.

The Wedding of King Edward II and Isabella of France 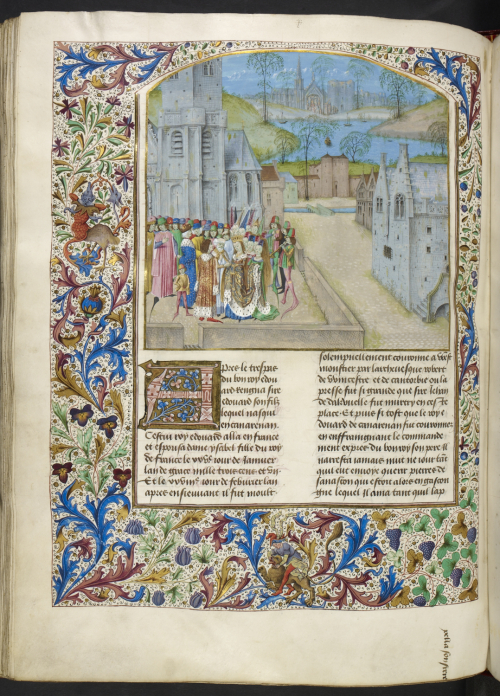 The wedding of Edward II and Isabella, daughter of Philippe IV of France, from Wavrin’s Chroniques d’Angleterre, Bruges, between 1471 and 1483: Royal MS 15 E IV, f. 295v

On 25 January 1308, in Boulogne, northern France, the French princess Isabella, aged only 12, was joined in marriage to the new king of England, Edward II (r. 1307–1327), who was then almost 24. The ceremony was depicted by an artist working in Bruges in the 1470s, who imagined the ceremony taking place outside, on the parvis of a Gothic church, in a beautiful landscape in the Flemish style. The illumination shows the bride centre-stage, dressed in shining blue and gold, with a sparkling crown and gorgeous flowing hairstyle. Both bride and groom wear the royal ermine and the long, pointed shoes that were fashionable in this period. Edward would have had trouble going down on his knees to Isabella, as Prince Harry reputedly did to Miss Markle when he proposed. 600 lucky guests have been invited to the wedding this weekend. Here, Edward and Isabella are accompanied by a crowd of courtiers, all wearing gorgeous coloured robes and hats.

The Wedding of King Henry V and Catherine de Valois

Although royal love-matches were rare in the Middle Ages, King Henry V (r. 1413–1422) seems to have been attracted to Catherine de Valois, if Shakespeare’s Henry V is to be believed. Perhaps the fact that their union guaranteed the English succession in France may have been a factor! Their wedding ceremony took place in 1420 and is shown in this magnificent illumination in a huge copy of Jean Chartier’s Grandes Chroniques de France. It was copied in Calais in 1487, probably being commissioned as a gift for King Henry VII of England. 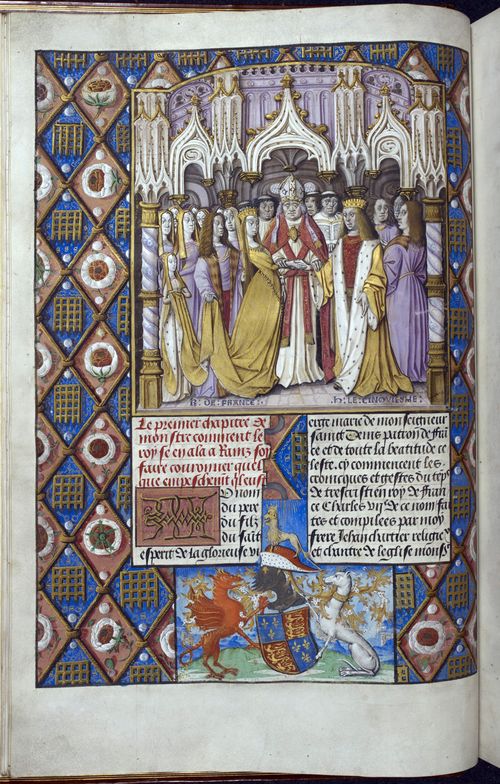 Unfortunately Henry V died after only two years of marriage, with the widowed Catherine secretly marrying his squire, Owen Tudor. Henry VII (r. 1485–1509) was their grandson, and needed to establish his legitimate claim to the throne after defeating Richard III. This book was probably a political gift to him and the borders are crammed with royal emblems and devices, and particularly of the new Tudor dynasty.

The Wedding of Richard II and Isabel of France 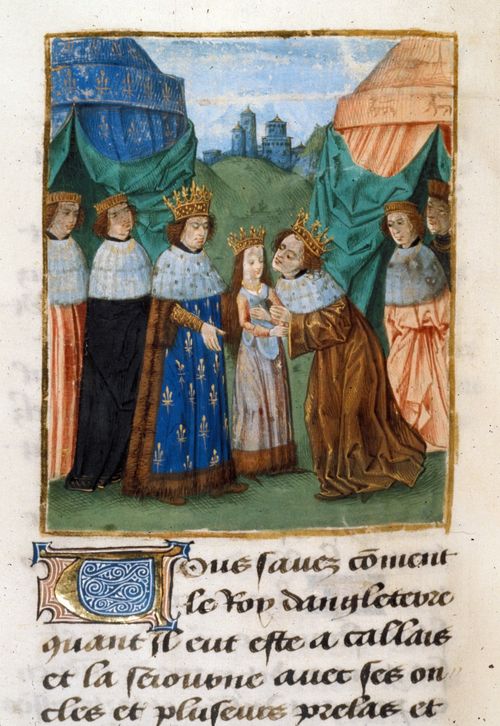 This picture of the second marriage of Richard II (r. 1377–1399) in 1396 shows the king about to kiss his young bride. Isabel was only six years old when she married Richard, six years younger than the age limit for marriage decreed by canon law, and again a purely political alliance. We should note that the kiss did not take place on the palace balcony, as is traditional with most modern marriages. This Saturday, however, the royal couple will not be posing on the balcony for a photo, according to a palace spokesperson, as they will not be at Buckingham Palace, where the balcony shots are traditionally taken.

The Wedding of Henry III and Eleanor of Provence 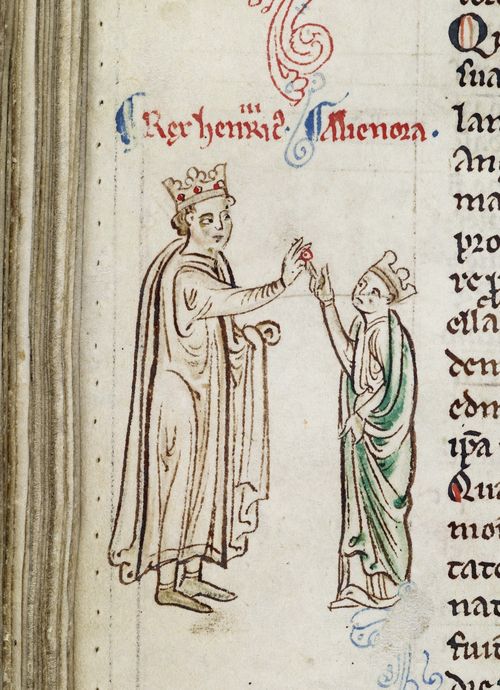 Royal wedding rings are today made from Clogau or Welsh gold, a tradition dating back to the wedding of George VI and Elizabeth Bowes Lyon (the Queen Mother, Harry’s great-grandmother) in 1923. This marginal painting was done by Matthew Paris in his History of the English to illustrate a passage in which he discusses the marriage between King Henry III of England (r. 1216–1272) and Eleanor, daughter of Ramon Berenguer V, Count of Provence, and Beatrice of Savoy. The ceremony that took place in 1236 in Canterbury Cathedral is symbolised here by the king's gesture of placing the wedding ring on the queen's finger.

The Wedding of Henry VI and Margaret of Anjou

No doubt the modern royal couple will receive many gifts. This gorgeous collection of chivalric romances and treatises was a wedding gift probably presented by John Talbot (d. 1453), Earl of Shrewsbury, to Margaret of Anjou, future queen of England. 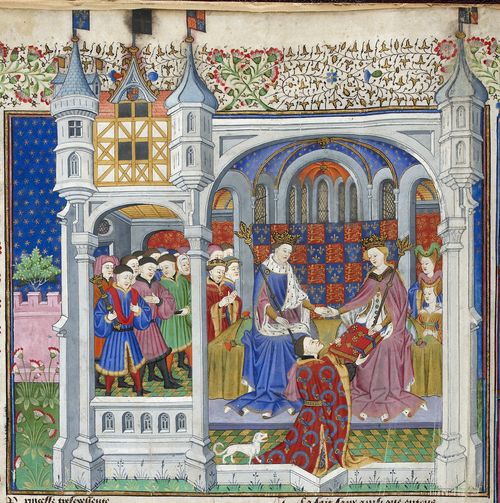 Detail of a miniature of John Talbot, identified by his Talbot dog, presenting the book to Queen Margaret, seated in a palace beside King Henry VI, and surrounded by the court, in the 'Talbot Shrewsbury book', Rouen, c. 1445: Royal MS 15 E VI, f. 2v

This glorious miniature shows Henry VI (r. 1422–1461, 1470–1471) and Margaret of Anjou holding hands. The wedding ceremony took place on 24 May 1444 in St Martin's Cathedral at Tours. The English king was not present at the ceremony, and so the Earl of Suffolk acted on his behalf, whereas Prince Harry will be waiting for his bride at the altar of St George’s Chapel.

By all accounts the wedding of Prince Harry and Miss Markle will focus on fun, joy and a chance to celebrate with the public. After the wedding of Mary Tudor (1496–1533), sister of King Henry VIII, to Louis XII of France, a sumptuous pageant was presented to celebrate the entry of the eighteen-year-old bride to Paris on 6 November 1514. 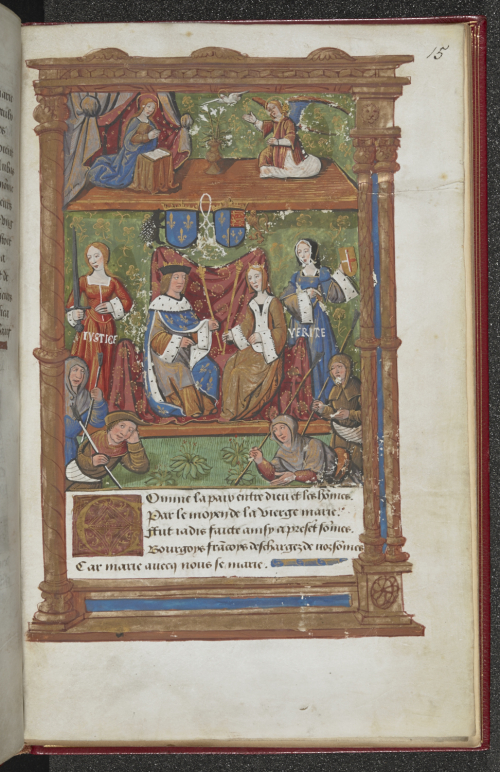 The final pageant, with the Annunciation (above) and with Louis XII and Mary seated, flanked by Justice and Truth, with their royal arms linked by lovers' knots above; below is a pastoral scene with shepherds and shepherdesses, from Pierre Gringoire, Pageants for the Reception of Queen Mary of France, Paris, 1st quarter of the 16th century: Cotton MS Vespasian B II, f. 15r