The British Library’s Medieval Manuscripts team comes from all over the world, but we have one place in common: the city of London, where we work at St Pancras. Today is London History Day, and here are some of our favourite medieval depictions of that city, at once distant yet somehow still recognizable.

An early map of the world

London is one of the oldest capital cities, which has survived the fall of the Roman Empire, viking attacks, fires and more. Let's start our survey with the earliest surviving detailed map of the British Isles. This map was made in southern England in the mid-11th century, but it may have been based on earlier models, possibly including maps made under the Roman Empire. The British Isles is shown in the lower left corner, with Lundona being one of the places named. 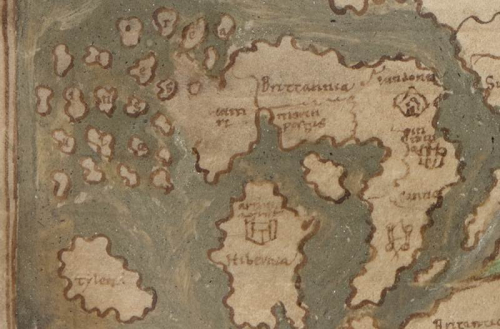 The itinerary of Matthew Paris (d. 1259), a monk of St Albans Abbey, is a linear map that allowed the reader to travel to Jerusalem in his or her mind. Matthew described London as the chief city of England and claimed that it was founded originally by Brutus as ‘New Troy’. Matthew also picked out several landmarks, all of which still exist in some form or another today. These included the River Thames, Lambeth, Westminster, St Martin-in-the-Fields, the bridge, and the Tower of London. At the bottom of the map, Matthew Paris listed several of the gates of London. (See Edward Mills’s fantastic reconstruction of Matthew’s view of London.) 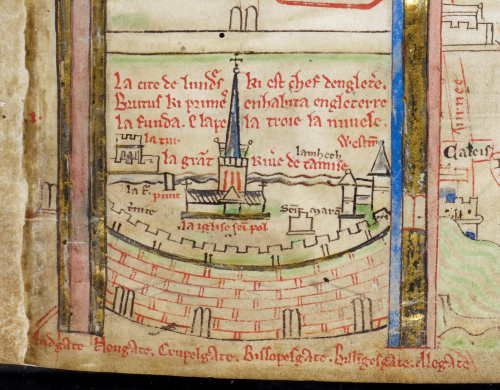 The Tower of London

The earliest topographically accurate depiction of London is found in a collection of the poems of Charles, Duke of Orléans, made in Bruges around 1483. Charles had been captured at the Battle of Agincourt in 1415 and he was held in England for the next twenty-five years. At the centre of the image is the Tower of London, where Charles was imprisoned during some of this time in England and where he composed his poems. 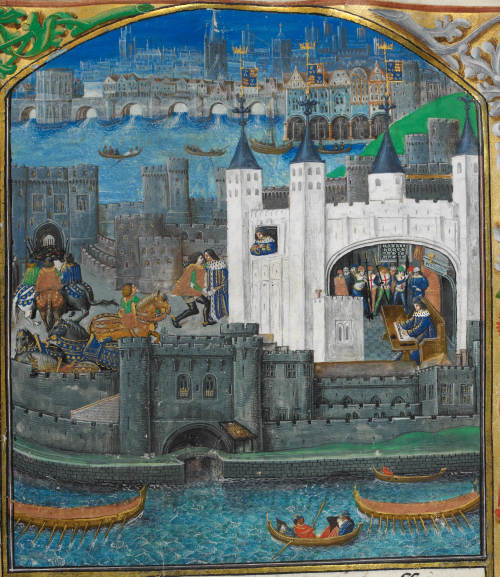 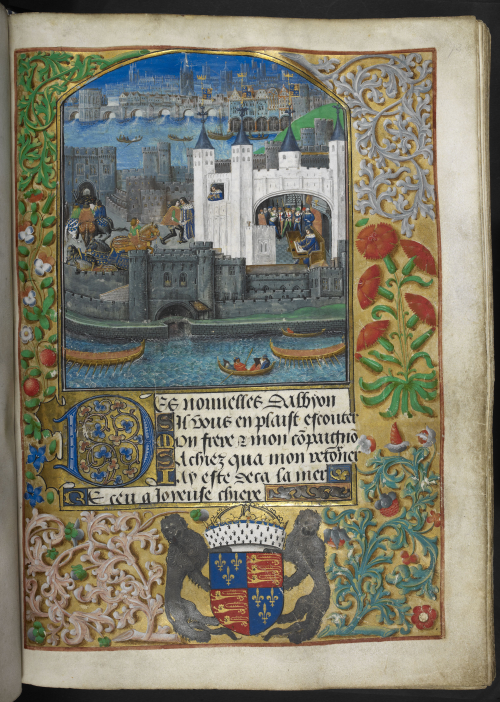 A view of London with the Tower of London, and Duke Charles d’Orléans writing in the Tower: Royal MS 16 F II, f. 73r

Another early resident of the Tower was King Richard II. He was held in captivity there shortly after being deposed in 1399. Things didn't end well for Richard, as he subsequently died at Pontefract Castle (perhaps being starved to death). 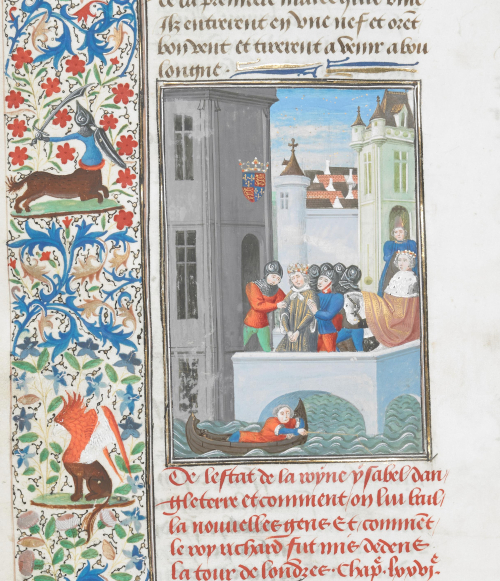 One thing is certain. There are now fewer elephants in residence at the Tower than there were in the time of Matthew Paris! Matthew Paris’s drawing of the elephant that lived in the Tower of London: Cotton MS Nero D I, f. 169v

At the centre of the image in his Itinerary, Matthew Paris drew St Paul’s Church. His building is unfamiliar to modern eyes, since he depicted it with a steeple and not with the iconic dome designed by Christopher Wren (d. 1723), following the destruction of the medieval cathedral in the Great Fire of London in 1666. Westminster Abbey today is probably not much different from the time of Matthew Paris. In the same manuscript as the Itinerary, Matthew Paris drew depictions of kings holding objects with which they are particularly identified. He depicted King Henry III (r. 1216–1272) holding Westminster Abbey, which he had rebuilt over the structure commissioned by Edward the Confessor. The Abbey today is still largely the same design as that commissioned by Henry. 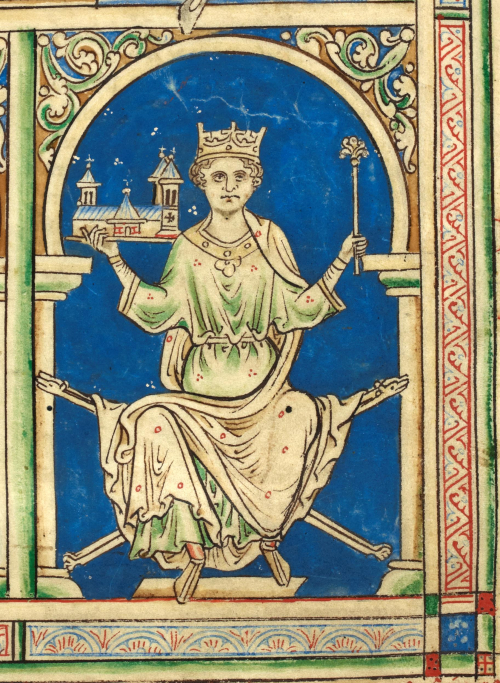 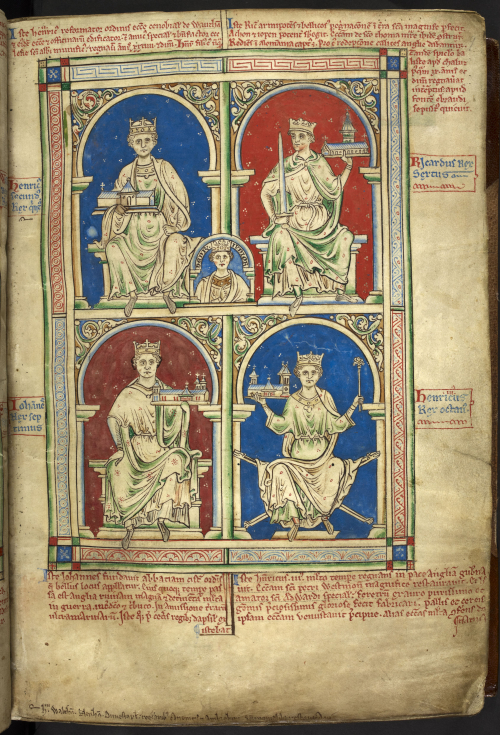 Other London landmarks looked very different. The city's bridges are not lined today with houses, as London Bridge was in the medieval period. The population of London was also substantially smaller: around 60,000 people lived there by 1500. But ‘rush hour’ could still be perilous. John Lydgate recounted how, at 4pm on 20 November 1441, the young son of a butcher was pushed by an ox and fell off London Bridge. Thanks to the help of St Edmund, a passing boatman rescued the child and returned him, safe and sound, to his mother. The whole sequence is illustrated vividly in a 15th-century copy of Lydgate’s Lives of SS Edmund and Fremund. 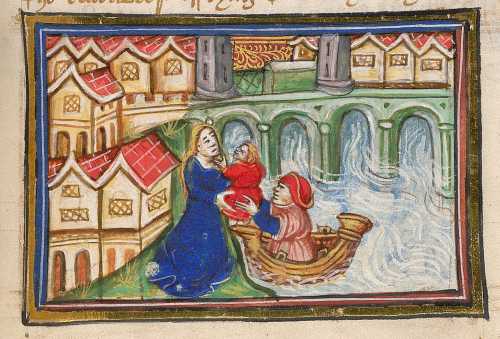 A boy falling off London Bridge and being returned by a boatman to his mother: Yates Thompson MS 47, ff. 94v, 97r