‘The Earth is, in fact, round’

It’s a major peeve of many medieval historians: the popular belief that people who lived before Christopher Columbus thought that the world was flat. It is actually rare to find groups in the classical, Late Antique and medieval eras who believed in the flat Earth. On the contrary, numerous ancient thinkers, navigators and artists observed that the Earth was round. 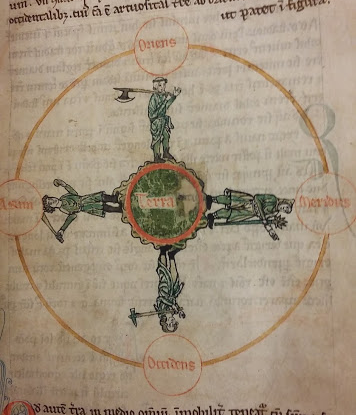 Miniature of the Earth in a circle, with personifications of the four cardinal points, made in England in the 3rd quarter of the 13th century: Egerton MS 843, f. 23r

The first recorded, unambiguous European references to a spherical Earth are found in the work of ancient Greek philosophers, such as Plato and Aristotle. By the time the Roman writer Pliny the Elder was writing the first part of his Natural History around AD 77, the fact that the Earth is a sphere was treated as common knowledge: ‘We all agree on the earth’s shape. For surely we always speak of the round ball of the Earth’ (Pliny, Natural History, II.64). 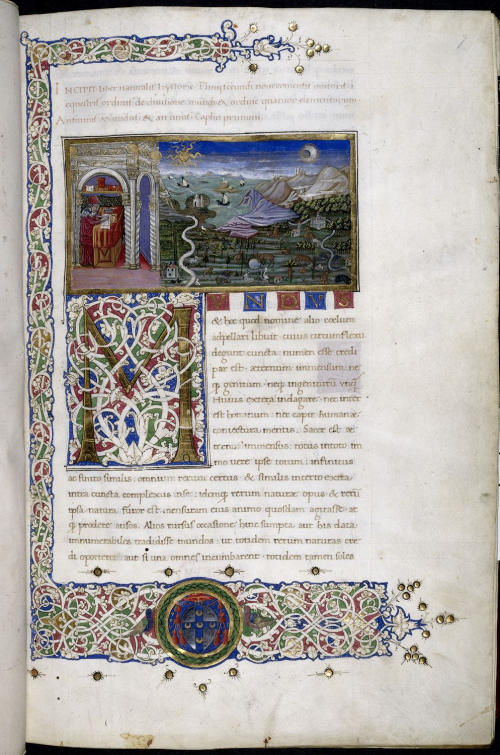 These views continued into the medieval period, since even the changing hours of daylight throughout the year made it evident that the Earth was round. Around 723 or 725, the monk Bede explained to his students:

‘The reason why the same days are of unequal length is the roundness of the Earth, for not without reason is it called ‘‘the orb of the world’’ on the pages of Holy Scripture and of ordinary literature. It is, in fact, a sphere set in the middle of the whole universe. It is not merely circular like a shield [or] spread out like a wheel, but resembles more a ball, being equally round in all directions ...’ (Bede, The Reckoning of Time, translated by Faith Wallis (Liverpool University Press, 1999), p. 91). 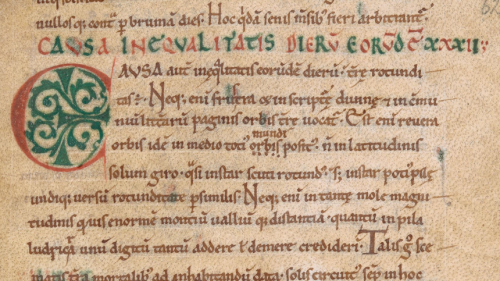 Explanation of the Earth as a sphere, from a copy of Bede, De Temporum Ratione, made in England or Normandy, late 11th or early 12th century: Royal MS 13 A XI, f. 62r

This belief was also reflected in many medieval maps. Round diagrams of the Earth were included in the works of Isidore of Seville. Meanwhile, a map that was often circulated with the work of the 5th-century writer Macrobius showed the climate zones of Earth divided into northern and southern hemispheres. 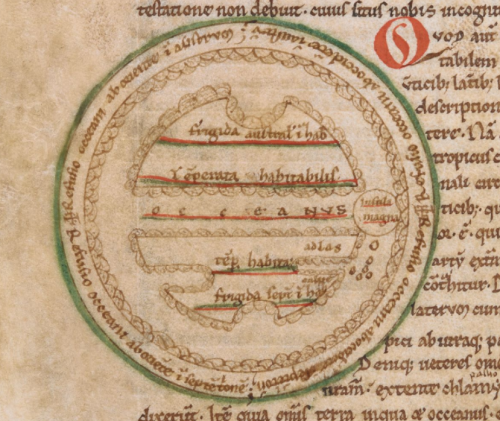 Diagram of the habitable zones of the Earth, from Macrobius, Commentarii in Ciceronis Somnium Scipionis, France or England: Add MS 11943, f. 38v

The idea that the Earth was round was not limited to tracts on science and natural history. Much medieval art also depicted the Earth as a sphere. For this reason, depictions of God the Creator often show him holding a compass, a tool used to draw round objects. 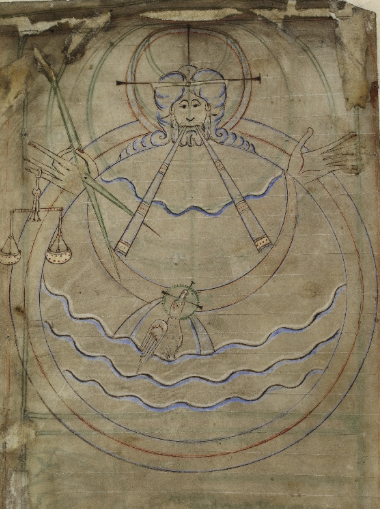 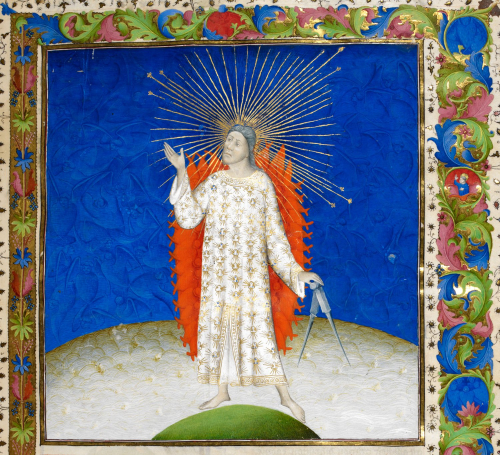 Depiction of God the Creator holding a compass, from a Bible historiale made in Paris and Clairefontaine, 1411: Royal MS 19 D III, f. 3r

Many writers also assumed the Earth was a sphere. Dante’s Divine Comedy even discussed how the shape of the world created different time zones, and how different stars were visible in the southern and northern hemispheres.

Of course, even though earlier thinkers knew the world was round, they did not fully understand how it worked. Without a theory of gravity, Pliny struggled to understand how people who lived in the southern hemisphere did not fall off the world, while Bede denied that anyone lived in the southern hemisphere at all. (Bede was wrong, as you can see in the British Library’s summer 2018 exhibition, James Cook: The Voyages.) 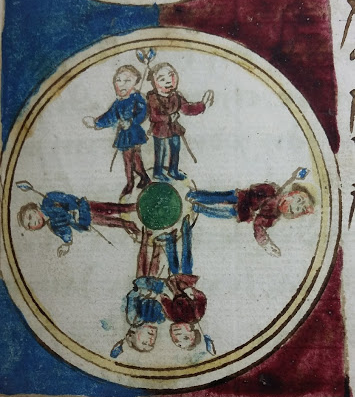 Diagrams using human figures to show the round shape of Earth, from a copy of Gossuin de Metz’s ‘L’Image du Monde’ made in Bruges, 1464: Royal MS 19 A IX, f. 42r

Nevertheless, there is one thing on which most human thinkers, for most of history, have agreed — as Bede put it, 'the Earth is, in fact, a sphere'.

Albertus Magnus must have had some notion of gravity: in De Animalibus he gives three reasons why the earth is spherical: observational, based on the angle of Polaris at different latitudes, philosophical, because a sphere is the most perfect solid, and deducing that since meteorites everywhere fall toward the center, an object made up of them would remain spherical. Dante, BTW locates Purgatory in the southern hemisphere, roughly the location of Easter Island, and gravity works just fine there.

I'm curious: where did the idea that people used to believe the Earth was flat actually get started? It is wildly common, to the point of being accepted as common fact--but who was the culprit behind this mass mis-education?

The myth that medieval people believed the earth to be flat can be traced to Washington Irving's 1828 novel *A History of the Life and Voyages of Christopher Columbus*. Irving added this element to spice up an otherwise rather dull story, the novel became a bestseller and the myth became part of the founding story of the US. The history of this common misconception can be found in Jeffrey Burton Russell’s *Inventing the Flat Earth: Columbus and Modern Historians* (1991) and I write about the persistence of this myth here: https://historyforatheists.com/2016/06/the-great-myths-1-the-medieval-flat-earth/

Lucy, I would recommend the essay by the late great Stephen Jay Gould "The Late Birth of a Flat Earth", in his collection "Dinosaur in a Haystack" (1996). The only early Christian to seriously argue for a flat earth was a widely travelled merchant called Cosmos Indicopleustes, who was rather too keen on extrapolating from complex exegesis of the Tabernacle in Exodus to geography lessons! Since he lacked both formal secular and formal theological education, he was generally ignored by the Fathers, but later polemicists dredged him up again and again. Given that he was a merchant, you would think he would have watched a ship come over the horizon in the harbour on one of his many voyages to India to buy spices, but hey ho).

I wrote an article on this very subject long ago; such a persistent myth. One cause of confusion both then and more recently seem to me the difficulty of depicting a three-dimensional sphere on a two-dimensional page, especially when conventions of illustration are stylised. As an artist, nowadays, this is a problem I live with!

If you look at a great deal of three-dimensional arts from the 5h century onward, many emperors, kings and christ figures carry a representation of the world, surmounted by a cross. That representation is an orb.

The persistent belief in the flat earth myth is one of the strangest modern ideas, with a great many people, and even the occasional academic, holding unto a belief that has no or very little evidence for it and a massive amount of evidence against it.