Rihanna recently created headlines when she appeared at the 2018 Met Gala, wearing a white mitre, in the guise of a bishop or even a pope. People have long been fascinated with the idea and imagery of a female pope. In the later Middle Ages, there was an oft-repeated story about Pope Joan, a highly educated woman who pretended to be a man and was elected to the papacy. Pope Joan almost certainly never existed, but it's interesting to see how this story evolved. 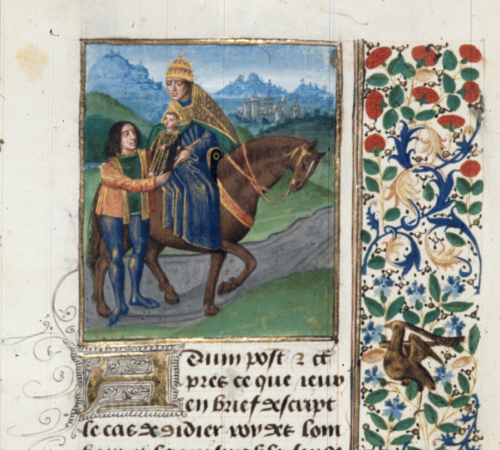 Some of the earliest references to a female pope appear in 13th-century chronicles, such as the Universal History of Metz, a history of the whole world from the beginning of time. The basis for the most common medieval legend of Pope Joan is found in the Chronicle of Popes and Emperors compiled by Martin of Troppau (d. 1278, also known as Martin of Opava or Martinus Polonus). According to this chronicle, Joan was an Englishwoman who was born in Mainz in the 9th century. She fell in love and dressed as a man in order to follow her lover on his travels to Athens. The brilliant Joan became very well educated and was elected pope. However, her secret was revealed when she gave birth in the middle of a papal procession and died, and the popes never used that route for their processions again. Versions of this story became increasingly elaborate, claiming that Joan had been killed or that a statue was later constructed on the site of her death. 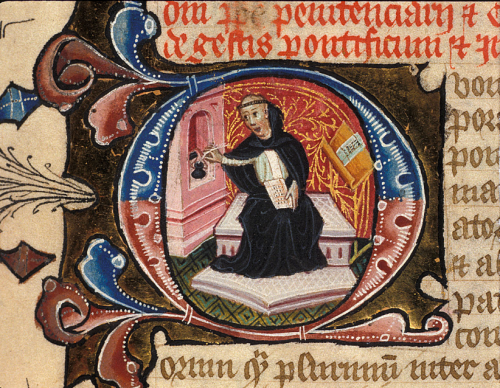 Image of Martin of Troppau from an historiated initial in a copy of his chronicle: Harley MS 641, f. 118r

Earlier sources do not support this narrative. Martin and others claimed Joan lived in the 9th century and succeeded Pope Leo IV (d. 855), but they may have confused her with one of the Pope Johns who reigned in the second half of the 9th century. The 9th- and 10th-century papacy was also scorned by contemporary and later writers for its corruption, with some writers suggesting that the popes were controlled by the women in their lives, including their mistresses and such accounts may have fueled ideas about a female pope. The story about Joan's statue may also have resulted from confusion over one of the statues of the Virgin and Child in Rome.
The story of Pope Joan was frequently found in later medieval chronicles, including the 'official' account of the lives of the popes written by the Vatican librarian Bartolomeo Platina (d. 1481). Joan also became a major figure in literature. Boccaccio included Joan in his Book of Famous Women, holding her up as a negative example of a clever woman who had the audacity to infiltrate male institutions and brought dire consequences in her wake. Christine de Pizan certainly knew the story of Pope Joan, but she pointedly omitted Joan from her City of Ladies, a text written primarily to praise women and counteract what she claimed was a misogynistic literary culture. 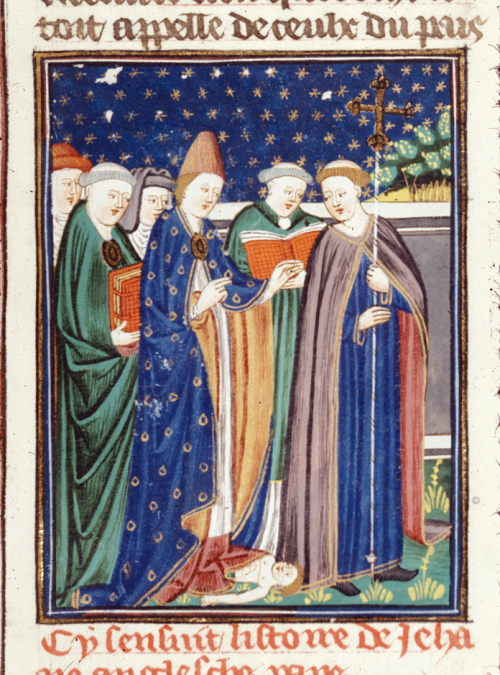 Other writers treated Joan differently. She was praised by the humanist writer Mario Equicola (d. 1525), who wrote: 'What shall I say of John/Joan VII? It is clear that a woman can ascend to the papacy, the highest rank in Christendom.' Equicola's attitudes may have been informed by his role as a courtier of Isabella d'Este, an Italian noblewoman and influential patron during the Renaissance.

One modern commentator, Thomas Noble, has described Pope Joan as 'a woman who never lived but who nevertheless refuses to die'. Given modern fashion trends, it looks as though interest in the idea of a female pope may continue for many more years to come.

I played the role of Pope Joan in an amateur production of Caryl Churchill's "Top Girls". It was a fascinating experience.