As part of his plan to reform the Church, Charlemagne gathered scholars and advisors to his court from all over Europe. One of these was Alcuin of York, who prepared a corrected version of the Bible for the Emperor in early 800. Alcuin was appointed abbot of the monastery of St Martin in Tours in 796, and under his direction and that of subsequent abbots, St Martin’s became a major centre for the production of Bibles — over forty copies from the first half of the 9th century survive (for more on this, see David Ganz, ‘Mass production of early medieval manuscripts’, cited in the Bibliography below). Together, these manuscripts constitute impressive evidence of the desire to produce a corrected text of the Bible for use throughout the Carolingian empire. 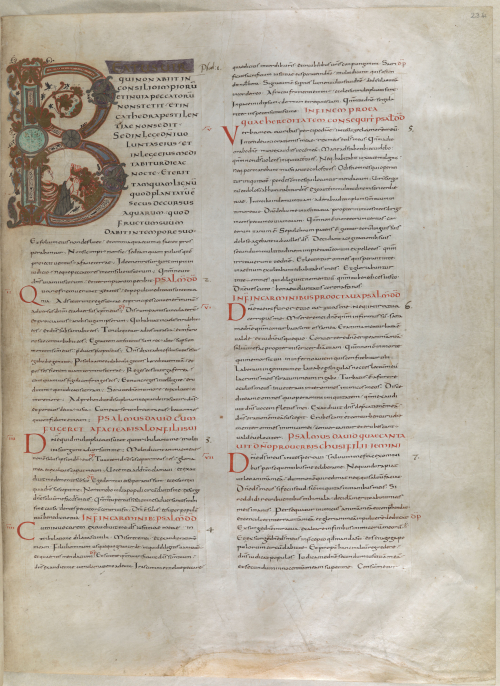 Historiated initial ‘B’ with David wrestling a lion, at the beginning of Psalms, in the Moutier-Grandval Bible, Add MS 10546, f. 234r

As noted following a recent discovery at Princeton, the copies of the Bible produced at Tours are large and their text is very legible, with a distinctive ‘export quality script’ (Rosamond McKitterick, ‘Carolingian Bible production: the Tours anomaly’). Of the fourteen surviving Tours pandect Bibles (books bound in a single volume), three are spectacularly illustrated, made during what has been called the ‘high point’ of Tours production, under abbots Adalhard (r. 834–843) and his successor Vivian (r. 844–851). The earliest of these is the Moutier-Grandval Bible (British Library Add MS 10546), an enormous volume of 449 leaves that is over half a metre (over one and a half feet) tall. To get a sense of its sheer size, see these images of the manuscript being filmed in the British Library’s photographic studio.

The Bible takes its name from the monastery of Moutier-Grandval in the diocese of Basel, for which it may have been made originally as an export of the Tours scriptorium. The book includes four miniatures that are celebrated as some of the earliest examples of full-page narrative art in manuscripts from the Middle Ages. 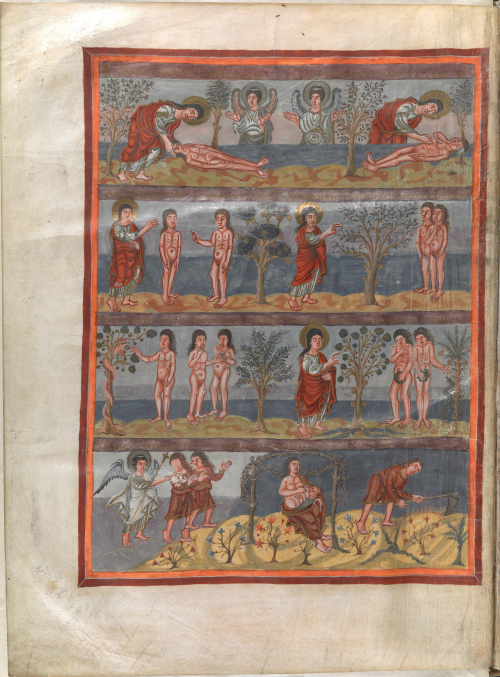 The Creation of Adam and of Eve, the Admonition, the Temptation and Fall, the Expulsion and Eve suckling and Adam toiling, at the beginning of Genesis, Add MS 10546, f. 5v

The first illustration appears at the beginning of Genesis, arranged in four friezes, in which the sequence of events moves from left to right. Individual scenes depict selected events described in the second and third chapters of Genesis: the Creation of Adam and Eve; God’s warning not to eat from the Tree of Knowledge; the Temptation and Fall; and the Expulsion. Within the borders is a poem in verse written in gold letters also summarizing these events; in fact, the poem may have been composed from the pictures. 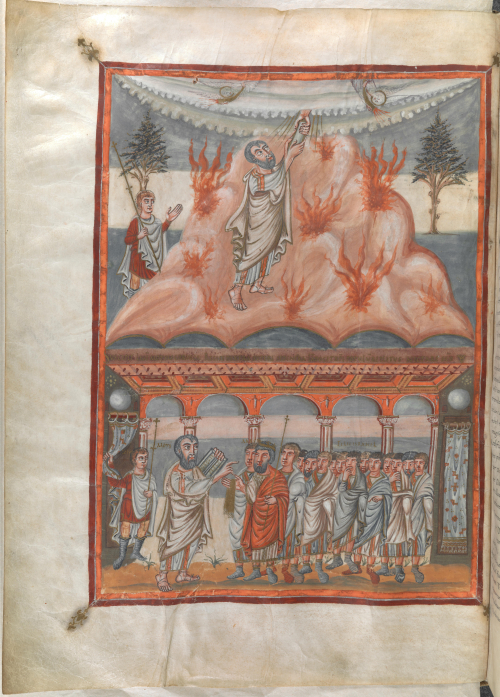 Moses receiving the Law from the Hand of God, and extolling the Law to the people, at the beginning of Exodus, Add MS 10546, f. 25v

The book of Exodus also merits a full-page illustration recapitulating some of its most significant episodes, presented in two rather than four registers. In the upper one, Moses receives the law from the hand of God on a mountain erupting in flames, illustrating Exodus 24:17 (‘And the sight of the glory of the Lord was like a burning fire upon the top of the mount’). Below this Moses imparts the commandments from the second set of tablets to the people of Israel (Exodus 34:29–32). Stylistically, the artist’s debt to classical art is clear, in the dress of the figures, the hanging curtains and in particular the architectural backdrop with its arcaded wall, coffered ceiling, and figures in the spandrels reminiscent of Roman wall painting, now known from excavations in Pompeii and Herculaneum.

You can view the Moutier-Grandval in all its splendour on our Digitised Manuscripts site.

Scot McKendrick & Kathleen Doyle, The Art of the Bible: Illuminated Manuscripts from the Medieval World (London, 2016), no. 6.