Classical legends have an enduring quality that means they have been adapted, translated, read and performed almost continuously from antiquity up to the present day. Such stories certainly captured the medieval imagination, judging by the number of massive, gloriously illuminated copies that were made for those who could afford them — mostly royalty and the nobility — in the 14th and 15th centuries. Medieval aristocrats loved history, particularly when mingled with romance, and the legend of Troy held an extraordinary fascination for them, especially after the crusaders brought back accounts of the exotic lands of the Middle East.

Two British Library manuscripts containing the Troy legend in French have recently been fully digitised and are now available to view on Digitised Manuscripts.

This is a copy of the Histoire ancienne jusqu'à César or Histoire Universelle, a universal history from the time of Thebes to the reign of Pompey in ancient Rome 60 BC, and combining legend and historical fact. The artist is thought to have been from the Netherlands, but was working in Paris in the mid-to-late 15th century. Following on from the legends of Oedipus, Thebes and Hercules, this dreamlike view of the legendary city of Troy introduces the famous story, and is followed by a series of smaller images depicting the major characters and events, as well as a double-page spread showing the Greek navy attacking from the sea. 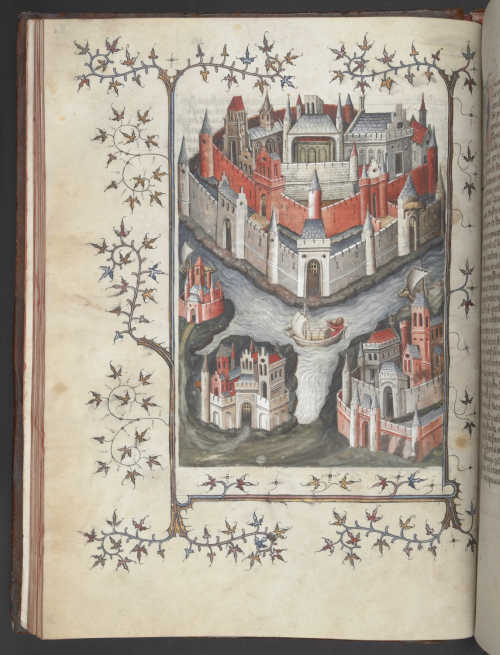 The city of Troy with a ship, from the Histoire Universelle, Paris, 1st quarter of the 15th century: Stowe MS 54, f. 30v 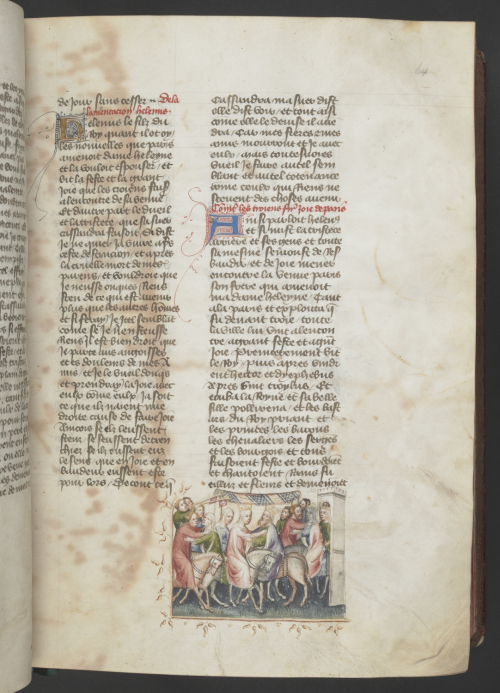 The celebrations in Troy on the return of Paris with Helen: Stowe MS 54, f. 64r 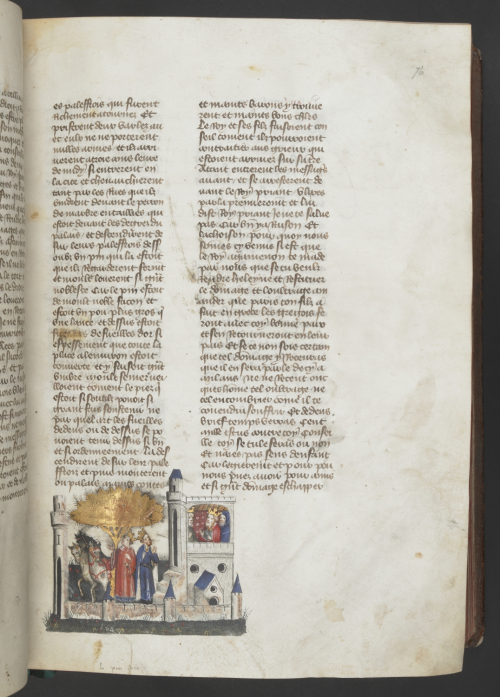 Ulysses and Diomedes under the golden pine, arranging a truce with Priam: Stowe MS 54, f. 76r 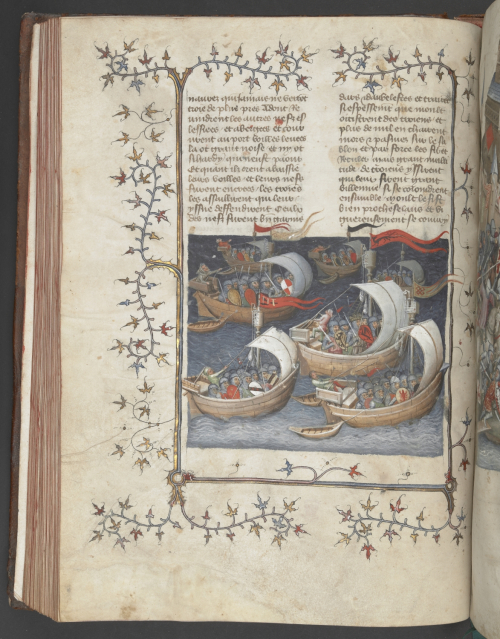 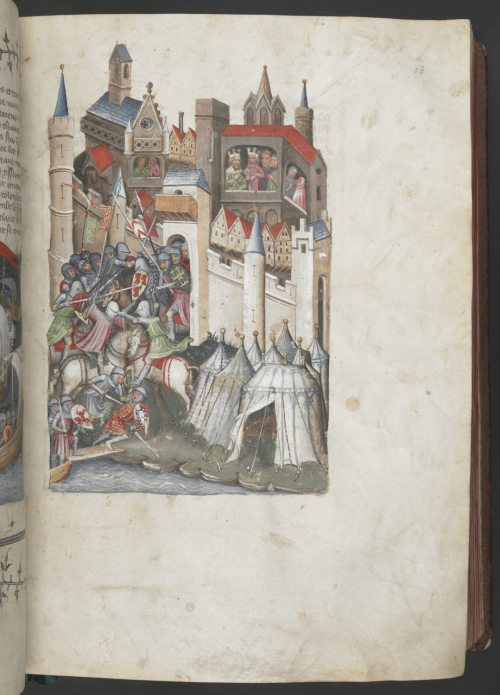 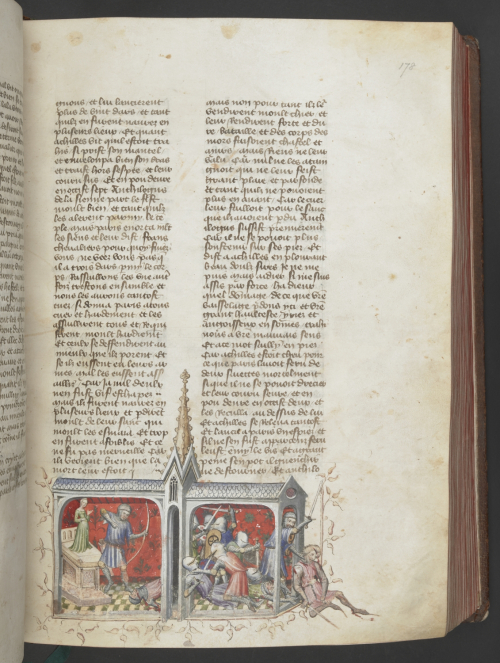 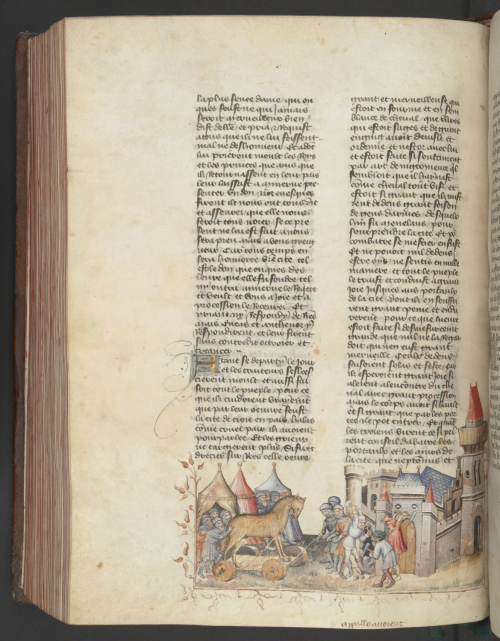 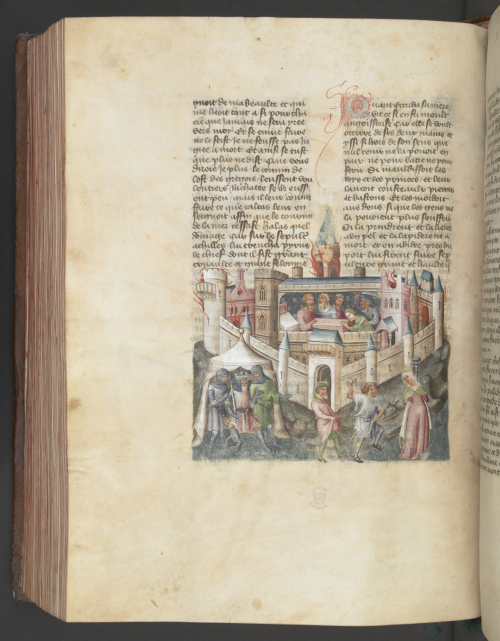 The history of Greece and Troy is given special emphasis in the Chronique de la Bouquechardière, a chronicle that covers the period from Creation to the reign of Caesar. It was compiled by the Norman knight, De Courcy, soon after the Battle of Agincourt (1415), and is named after his estate or fief, Bourg-Achard. His aim was to entertain and instruct his audience, while emphasising the moral lessons to be gained from history, at a time when Normandy was being conquered by the English under Henry V. This image illustrates events leading to the Trojan War, as related in Book II. Here, Paris has abducted Helen from Sparta and they meet his father, Priam, at the gates of Troy. Helen and Paris are dressed in elaborate 15th-century court dress and Priam wears a sumptuous jewelled cloak. 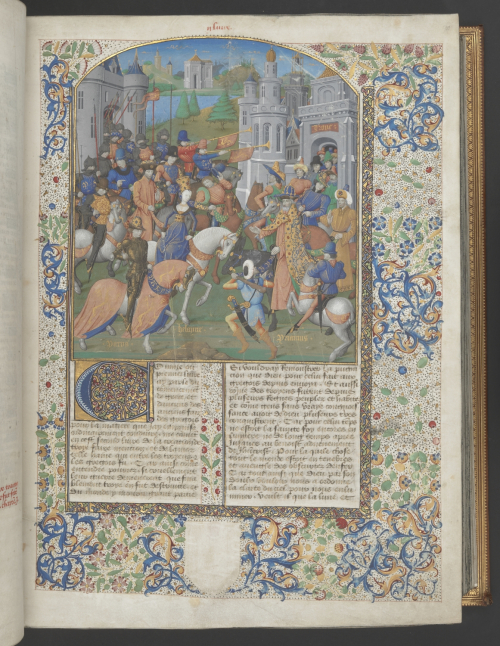 Included in both works is the legend of Alexander the Great, based on the exploits of the great military leader who reigned from 356 to 323 BC, but greatly embroidered with miraculous events from his life and campaigns in the East. This chronicle is divided into 6 books, and this illustration occurs at the beginning of Book 5, relating the history of Macedonia and Alexander's conquests. Here he is seen with Lady Fortune and her wheel, a device often used by medieval artists to show the rise and fall of famous heroes. 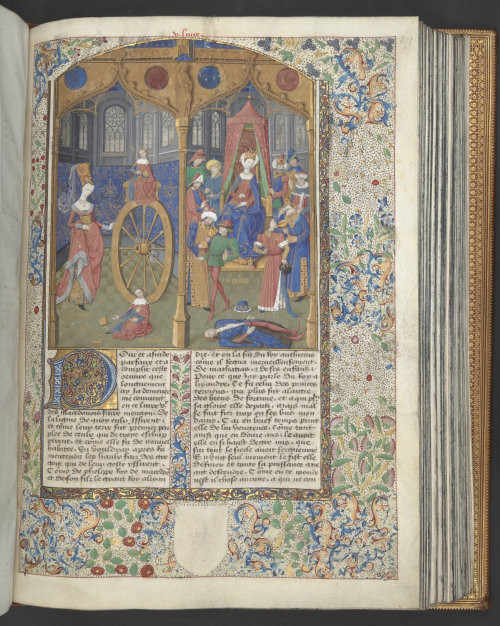 Alexander and the Wheel of Fortune, and the murder of Alexander II of Macedonia before the throne of Eurydice, at the beginning of book V: Harley MS 4376, f. 271r

On the right is shown the murder of Alexander II, short-lived king of Macedon from 371 to 369 BC. Alexander was murdered during a festival, probably in a plot involving his own mother, Eurydice, wife of Amyntas III.