June is busting out all over: it's time to prune back. An 11th-century calendar page for this month depicts a group of men chopping down branches. We are exploring this calendar every month this year: click here for the first post in the series. 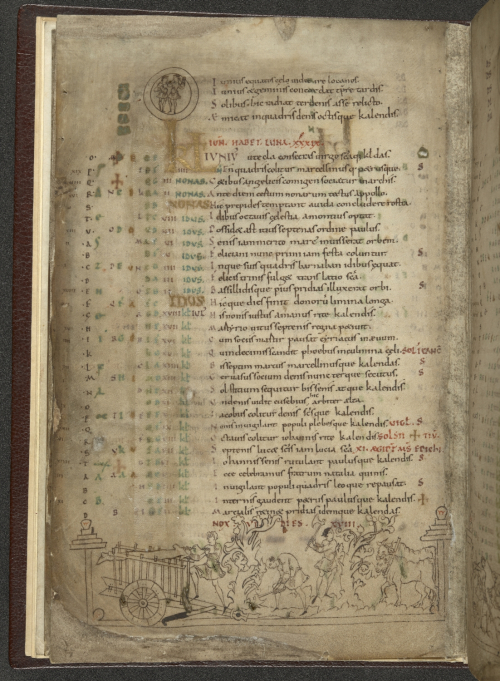 A calendar page for June, from a calendar made in southern England, mid-11th century: Cotton MS Julius A VI, f. 5v

The illustration at the bottom of the page for June shows two men cutting down branches of some very curvy plants, while a man on the left loads a large log into a two-wheeled cart. A pair of oxen, wearing a yoke, enter from the right. This calendar is one of only two to survive from England before the Norman Conquest that are illustrated with ‘labours of the month’, scenes of agricultural work and recreation. The other calendar can be found in Cotton MS Tiberius B V/1. For the previous two months, these calendars were illustrated with very similar scenes, but in June they diverge: the Tiberius Calendar shows men with sickles harvesting plants, while men pruning branches appear above the calendar page for July.

The axes in the drawing in the Julius Calendar resemble 9th to 11th-century implements found in England, although some of these may have been used for warfare rather than farming. But this image may have had symbolic meaning, as much as being a representation of day-to-day life. Many of the tasks depicted in this calendar — from ploughing in the page for January, and shepherding in the page for May — were used as metaphors in the Bible. Similarly, the Bible compares God to the owner of a vineyard who prunes or cuts down those plants and trees that do not bear fruit.

Elsewhere on the page, more specific information is included for each day of the month. This includes mathematical quantities and symbols used to calculate the days of the week and lunar cycles, listed in columns to the left of the date. Extra information also takes the form of a poem with a verse for each day.

Detail of a gold cross next to a verse for the feast of St Peter and St Paul: Cotton MS Julius A VI, f. 5v

An early user of the calendar marked out two days with gold crosses: the feast celebrating the birth of St John the Baptist, on 24 June; and the feast of the martyrdoms of St Peter and St Paul, on 29 June. Both of these remained important feast days celebrated throughout Europe in the medieval period, particularly since the feast of St John the Baptist coincided with Midsummer’s Day, or the Summer Solstice. Under the current calendrical system the summer solstice usually falls around 21 June, but in medieval Europe Midsummer was celebrated on 24 June.

Detail of a gold cross next to a verse for a feast of St John the Baptist: Cotton MS Julius A VI, f. 5v

After the gold crosses, another layer of marginal information was added in the form of notes in red. They record events such as the vigil of the feast of St John the Baptist on 23 June (Midsummer’s Eve) and the summer solstice (Midsummer) on 24 June. We can tell that the red notes were added after the gold crosses because the word ‘solstitiu[m]’ is split in two to fit around the cross.

This calendar page also includes the zodiac sign associated with much of the month of June: Gemini, or the twins, apparently deep in conversation. 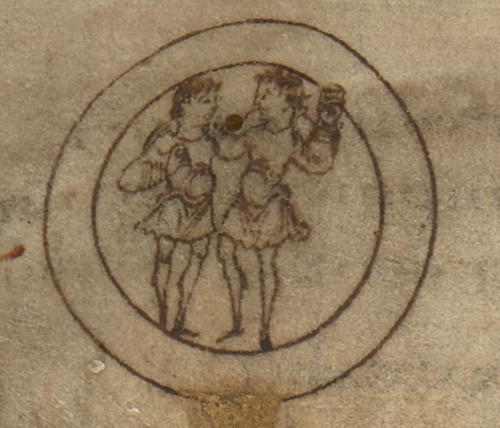 Detail of a roundel depicting the constellation Gemini, associated in astrology with the month of June: Cotton MS Julius A VI, f. 5v

It’s only five months until you will be able see this calendar in person at the British Library’s Anglo-Saxon Kingdoms exhibition. In the meantime, enjoy the month of June.

I am not fully convinced that this scene depicts a vineyard. I would take into conideration that this is the preparation of a field with the slash-and-burn method. Having left the little trees grow for up to ten years the twigs and branches are cut off and left to try. Larger logs are carried away. In fall the twigs are formed to one-meter coil, inflamed, being dragged and rolled over the patch. That destroyed all weed seeds and fertilized the ground. The field then can be poughed